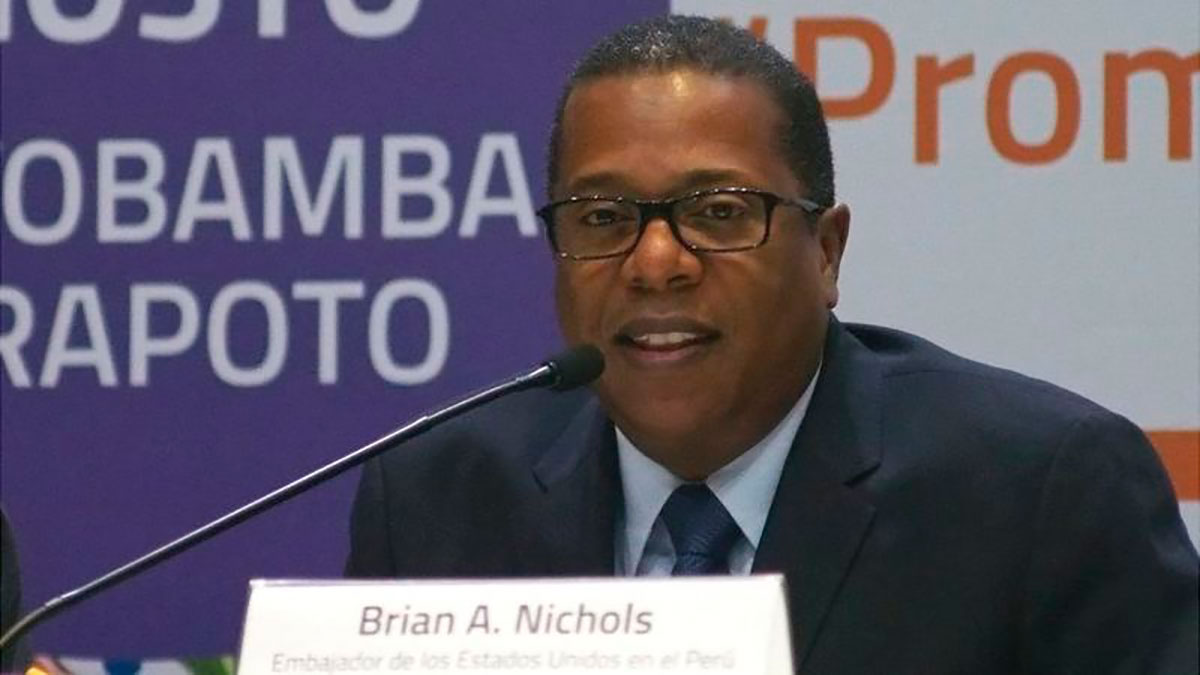 In his attempt to redesign the United States’ relationship with Latin America, President Joe Biden chose as his top diplomat for the region an experienced ambassador: Brian Nichols.

The 56-year-old Nichols’ appointment as undersecretary of state for the Western Hemisphere was approved Monday by the US Senate.

Former Washington ambassador to Zimbabwe, Nichols has previously worked in various positions related to Latin America and the Caribbean.

Nichols, who was nominated by Biden in March, will seek to build an agenda between the US and its southern neighbors marked by hot topics such as migration, the covid-19 pandemic or the review of the strategy towards Venezuela and Cuba.

Here are three facts about the new undersecretary of state for the Western Hemisphere.

1. Experience in politics and drugs

Nichols was born in 1965 and has a diplomatic career spanning more than three decades, which included a mission as an American ambassador. in Peru between 2014 and 2017.

Prior to that, Nichols served from 2007 to 2010 as deputy chief of mission at the Washington embassy. In colombia, where he oversaw the delivery of more than US $ 500 million for security and development, and addressed political affairs in Mexico and El Salvador.

He also oversaw the State Department’s counternarcotics programs from 2011 to 2013 and coordinated U.S. policies for Caribbean countries between 2004 and 2007.

“I would describe him as a career civil servant with a lot of experience in the region and also in other parts of the world,” says Arturo Valenzuela, who in the Barack Obama administration held the position that Nichols will now hold, to BBC Mundo.

Valenzuela met Nichols at the State Department and defines him as “an intelligent person” who “knows that things have to be handled diplomatically.”

“I always trusted him a lot for his professionalism, he is a person with a kind treatment,” he says.

Valenzuela also describes Nichols as someone “who has clear positions and is willing to express them.”

One sign of this was seen last year during the wave of protests against racism and police brutality that erupted in the US after the death of George Floyd, an African-American in police custody in Minneapolis.

“As an African American, for as long as I can remember, I knew that my rights and my body weren’t totally mine.“Nichols wrote in a message posted on the internet when he was ambassador to Zimbabwe

“I also always knew that America, conceived in freedom, has always aspired to be better – a glittering city on a hill – and that is why I have dedicated my life to its service,” he added.

The message was seen as an atypical gesture by an ambassador demanding rights for the black population of his country at a time when the Trump administration treated the protests as fomented by extremists or “foreign adversaries” such as Zimbabwe.

But Nichols also dedicated an explicit demand “to the government of Zimbabwe to end state-sponsored violence against peaceful protesters, civil society, labor leaders and members of the opposition.”

The ambassador’s attitude annoyed the Zimbabwe government party, which described him as a “bully”, accusing him of fomenting protests in that country and threatened to expel him.

3. Take on your biggest professional challenge

Nichols has a gigantic challenge ahead of him.

The Biden government intends to establish a relationship with Latin America that is different from that of its predecessor Donald Trump – who almost exclusively prioritized cutting migration to the United States – and to place issues such as human rights or warming on the regional table. global.

Biden also seeks to attack the problems that cause emigration from Central America, such as poverty or violence, and commissioned those efforts to his vice president Kamala Harris.

However, the increase in the migratory flow to the US is an increasingly sensitive issue for the White House: by the end of July, almost 1.3 million people had crossed the border. Of these, 95 thousand they were minors without parents or guardians.

The US has reached agreements with Mexico, Honduras and Guatemala so that these countries increase the mobilization of their security forces trying to stop the migrants on their journey north.

Biden has promised to allocate $ 4 billion in four years to attack problems that in his opinion cause emigration from Guatemala, El Salvador and Honduras, such as corruption, violence or the lack of economic opportunities.

In the midst of this scenario, Nichols is called to lead US diplomacy towards a region hit especially hard by the covid-19 pandemic and the economic collapse.

Some observers wonder how much room Nichols really will have to articulate a new agenda with Latin America, which, for example, improves cooperation with the south and relaunches pressure for elections in Venezuela.

Farid Kahhat, a Peruvian expert on international relations, recalls that although Latin America is not a US priority., Biden was a regular envoy to the region as vice president of the Barack Obama administration between 2009 and 2017.

It also notes that current US Secretary of State Antony Blinken has worked with Biden on foreign policy issues for years.

“Nichols is a career diplomat. As such, regardless of your own ideas, follow the guidelines defined by the Department of State“, Says Kahhat to BBC Mundo.

“I think that, in reality, what this augurs is that it will be Antony Blinken and Biden himself who will define the policy towards the region,” he concludes.