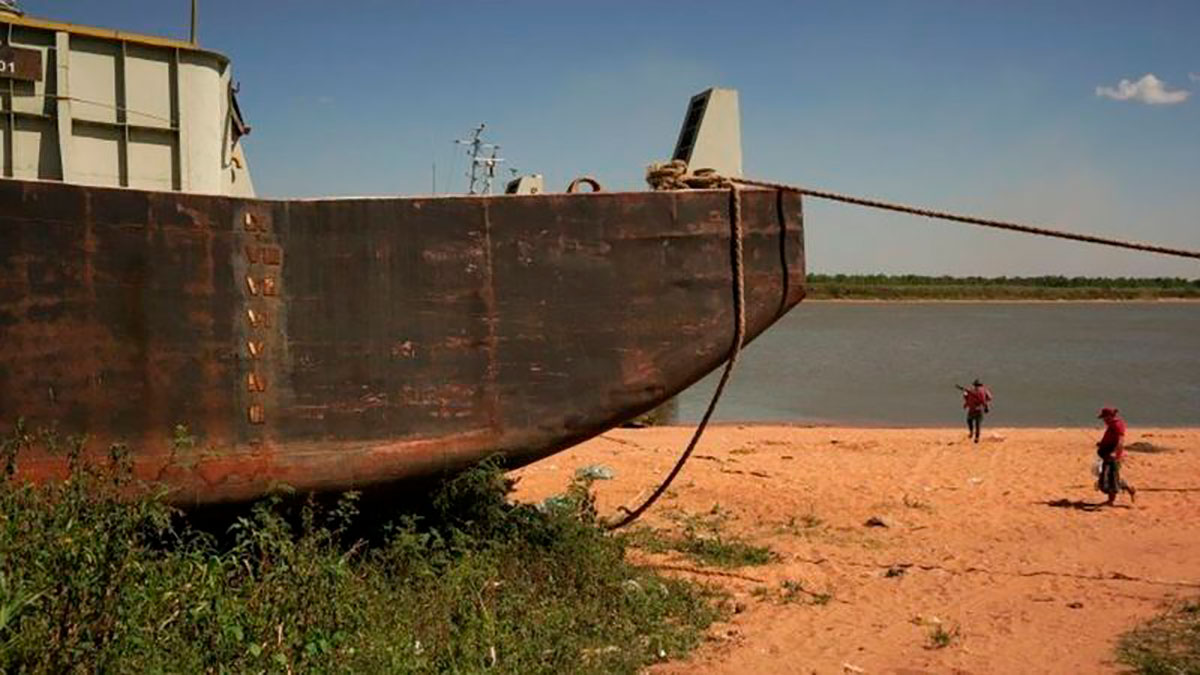 It is the second longest river in South America, after the Amazon, and is vital for the population, the economy and the environment of the three countries it crosses: Argentina, Paraguay and Brazil.

That is why the drought that affects the Paraná River, which already two years ago it is at its lowest levels in almost eight decades, is having serious consequences in those nations.

In practice, this means that the Paraná is more than ten feet below your usual average height, as explained to BBC Mundo Juan Borús, deputy manager of Information Systems and Hydrological Alert of the National Water Institute (INA) of Argentina, and one of the people who knows the river best.

Experts attribute this decline to a combination of factors.

The main ones are the alteration in rainfall patterns due to global warming and deforestation in the Amazon, since it is the trees of the Amazon rainforest that release the water vapor that eventually falls as rain on the Paraná river basin. , supplying it with water.

It is not difficult to imagine that such a steep drop in flow is affecting the communities that live in the area, and that depend on the river to obtain the water they drink and the fish with which many subsist economically.

Biologists warn that the drought is also affecting the ecosystems in the area, altering the natural balance on which hundreds of plant and animal species depend.

But the steep drop in the flow of which is one of the main river highways in South America it is having impacts that go far beyond its shores.

Here we tell you three of the indirect consequences of the drought in Paraná.

1. The problem of pimples

The Paraná, together with its main tributary, the Paraguay River, -which also suffers a historical drought- form the so-calledhParaná-Paraguay railroad, which allows continuous navigation between ports in Argentina, Brazil, Bolivia, Paraguay and Uruguay.

It is one of the largest navigable systems in the world.

Much of the waterway passes through Argentina (the Paraná crosses seven of its provinces) and that country exports most of your grain harvest and derived in this way.

Although the Paraná is still passable, as it is a very wide and deep river, the decrease in flow forced the huge ships that carry the grains to limit your carrying capacity, making transportation costs more expensive.

Cargo also had to be diverted by land to other ports, which, in addition to being expensive, is much more polluting, according to environmentalists.

The Rosario Stock Exchange (BCR), the port city that is one of the main nerve centers of Paraná, estimated that “due to the downspout, so far in 2021, Argentina has already lost US $ 620 million in exports of soybean flour and oil ”.

The BCR also reported that in 2020 the so-called “Gran Rosario port node” – an area of ​​about 70 kilometers where there are 25 port terminals – exported 11% less than in 2019, relegating its place as the largest agro-export port complex in the world.

The descent of the waters too strongly affects Paraguay, that does not have a direct exit to the ocean and accesses the Atlantic through the waterway.

The director of the Center of Fluvial and Maritime Shipowners of Paraguay, Juan Carlos Muñoz, told Reuters that the drought caused travel times to triple.

“All trade is late, everything is late. It is a very complicated year since 96% of Paraguay’s overseas trade is handled by the river and this implies a very important impact on the national economy ”, he pointed out.

To a lesser extent, the drought also affects Bolivia, which in 2019 began to use the waterway as an alternative to access the sea, and the southern states of Brazil, which, due to their proximity, also use it for their trade.

The Paraná not only fulfills a fundamental role for exports. It is also key for imports, particularly hydrocarbons.

70% of the compressed natural gas that Argentina imports comes through the waterway.

The country also imports oil by this route, which supplies by this means to several of its provinces (some this year had to receive hydrocarbons by land).

But the Paraná also plays a more direct role in creating energy.

On the river there dozens of dams, including two of the most important in the region: Itaipu, shared by Brazil and Paraguay; and Yacyretá, on the border between Paraguay and Argentina.

Itaipu administrators reported that the dam is operating with between 10 and 14 of its 20 turbines due to the hydrological crisis.

This caused a 15% drop in electricity production compared to 2020, and 35% compared to 2016, when the maximum generation was reached.

Although those responsible for the power plant guaranteed the energy supply, they warned that during the last “wet period” (the austral summer) the rains were not enough to recharge the reservoir, so what happens in the coming months will be key.

For its part, the Yacyretá Binational Entity (EBY), which manages the hydroelectric plant downstream from Itaipú, reported that 15 of its 20 turbines are operating, but “only 40% of installed power in the power plant ”due to the low flow of the Paraná.

Borús, from the National Water Institute (INA), pointed out that, despite this reduction in hydroelectric production, an energy crisis has not been generated because the missing is supplied with other sources of energy, particularly thermoelectric.

However, he warned that thermal power plants generate energy using fossil fuels that convert water into steam, making them a more expensive and polluting source than hydroelectric.

According to data from the National Institute of Statistics and Censuses of Argentina (Indec), the import of hydrocarbons increased by 76% year-on-year in the first seven months of 2021.

Borús stressed that the decrease in the flow of the Paraná is also generating an extra problem.

“Thermal power plants, like nuclear power plants, use river water for cooling, so the water intakes have had to be adapted, and that adds another cost, “he explained.

The decrease in the waters of the Paraná was combined with another of the great problems that plague the region – and the world -: the coronavirus pandemic, to create an unexpected inconvenience that has caused headaches, especially in Paraguay.

And, given the impossibility of using the border crossings with Argentina due to that country’s decision to keep its land border closed since March 2020 to contain covid-19, many people have taken advantage of the Paraná downspout to cross illegally between both countries.

According to a report by the Paraguayan newspaper Ultima Hora, “most of these people who cross are generally Paraguayans living in the neighboring country who come to visit their relatives and Argentines who do the same.”

In this way, they avoid the high costs of having to fly, the only alternative that exists at the moment (although Argentina announced that from October it will begin to reopen its border crossings).

But the illegal crossing through the languid Paraná is also used to traffic merchandise, not only from Argentina but also from Brazil, which shares a section of this river with Paraguay and another of the even drier Paraguay river.

“The point of greatest traffic flow is the northeast of the Department of Itapúa (in the south of Paraguay, bordering the Argentine province of Misiones), where the entry of smuggled products and people is registered clandestinely,” said the media. , which detailed that the traffic is carried out “in a fluid manner.”

Smuggling from Argentina appears to be particularly affecting a Paraguayan industry: poultry, which for decades has denounced the illegal entry of chickens from Brazil.

“Now that the Paraná River can be easily crossed due to its low flow, smuggling of chickens and eggs is being introduced; among other products, in many parts, by the three Borders, Otaño, Encarnación, or by any landing site “, denounced at the end of August the president of the Association of Poultry Farmers of Paraguay (Avipar), Pablo Mauger.

Avipar sources estimated that each month about 2 million kilos of chicken enter illegally, 80% from Argentina and 20% from Brazil.

Do youWhen will the waters of the Paraná rise to hinder this illegal traffic, alleviate the energy and environmental situation and allow the normal use of the river?

The forecasts are not very optimistic. Argentina’s National Meteorological Service (SMN) estimated that the dry weather will continue in the next three months, and during the wet period, between January and March, there could be below-normal rains.

According to Borús, if this forecast is fulfilled, in the austral summer, when the heat increases the demand for drinking water, a critical situation could be reached.

“For now all the riverside cities have had to adapt, adapting the water intakes, so a crisis was avoided,” he says.

“But if the downspout remains there will not only be a water quantity problem, but also quality problem, since the waters are so low the concentration of pollutants and the probability of bacteria is higher ”.

To add to the bad news, the INA estimates that between the end of October and November the Paraná could reach its lowest level since the drought started.

But Borús prefers to focus on tomorrow.

“This is a historic opportunity that we have to become aware of what it means to have water available, drinkable and of good quality in the tap of our house ”, he affirms.

“We have to be much more careful in the use of the resource now, and later when this downspout and this extreme situation is finished, also continue to acquire these habits permanently.”