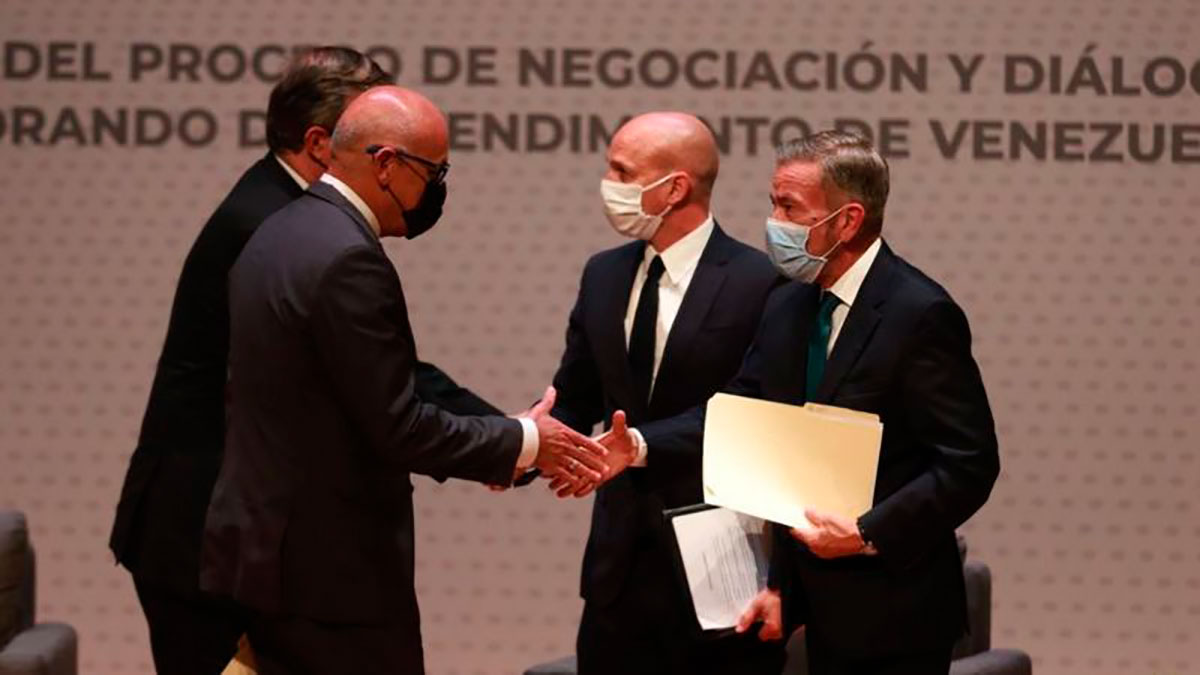 Seven points of discussion mark the new process of dialogue between the government and the opposition of Venezuela that formally began on Friday in Mexico.

After the failure of previous negotiations, the last one in Barbados two years ago, all eyes are now focused on this new attempt to try to find a solution to growing political, economic and social crisis that plagues Venezuela.

Again with the mediation of the Norwegian government, both parties signed a memorandum of understanding in which they affirm that they are willing to agree on the necessary conditions to hold elections in the country “with all guarantees” and underline the need for sanctions to be lifted. internationals against Venezuela.

And at the symbolic start of this new round of discussions, the representatives of the delegations showed, at least to the public, the best of their intentions to now reach an agreement after years of confrontation.

“This signature means a lot, it means everything, because it means hope,” said the president of the Venezuelan National Assembly and representative of the government delegation, Jorge Rodríguez.

“We already know what we do not agree on (…). The job now is to find where we can find points of confluence to guarantee the future and happiness of the people of Venezuela, ”he said.

For his part, the representative of the opposition under the umbrella of Plataforma Unitaria de Venezuela, Gerardo Blyde, acknowledged that each side “has had to give up part of its narrative to achieve a mid-point from the beginning, having the conviction that the process is more than necessary.”

The objective, he said, is “to achieve a comprehensive agreement that suits everyone, in which no one feels defeated and we all feel included.”

These are some of the keys to the new negotiation process between the government and the Venezuelan opposition,

The “lifting of sanctions and the restoration of the right to assets” is one of the seven points on the agenda agreed by both parties for dialogue in Mexico.

The difficult economic situation the country is going through makes the issue of sanctions on Venezuelan officials and companies one of the priorities for the government of Venezuela. Nicolás Maduro.

It will also require the administration of Venezuela’s frozen assets abroad. Already in May he announced that one of his conditions was “The return of bank accounts to Petróleos de Venezuela (PDVSA) and the Central Bank.”

Another requirement previously announced by Maduro was the “full recognition” of the National Assembly and the powers of the country, which on the agenda of the dialogue was reflected as “Respect for the Constitutional Rule of Law.”

“From there on, I am willing to go wherever you want ”, said in Caracas the Venezuelan president, whose legitimacy has been questioned by dozens of countries since the 2018 elections.

Thus, more than in the opposition, the ball thrown by Maduro falls mainly on the roof of the United States, whose previous government led by Donald Trump tightened sanctions on the South American country and which now seems to show a more relaxed mood with Joe Biden.

Last month, for example, the US agreed to allow non-US companies to export liquefied petroleum gas to Venezuela and aims to continue easing other sanctions – although it is not known to what extent – if the Maduro government shows a willingness to understand. .

“The Maduro regime can create a path towards sanctions relief” if it participates “in sincere discussions with the opposition – led, of course, by interim President Juan Guaidó – that result in a comprehensive negotiated solution to the Venezuelan crisis.” The US State Department spokesman said Thursday, Ned Price.

That’s what we need to see: significant progress ”, added.

However, Maduro was quick to respond. “Venezuela goes to the dialogue with Mexico (…) autonomously and independently and does not submit to blackmail or threats from the US government.”

For its part, the opposition reaches a dialogue with the aim of reaching a “national salvation agreement” that will allow us to overcome the serious crisis that the country is experiencing.

Among the points of the negotiation are “electoral guarantees for all” and an “electoral schedule for observable elections”.

The opponent Juan Guaidó It had already demanded “conditions for free and fair elections” as one of its main demands, without now asking for Maduro’s immediate departure from power, as he has done previously.

The opposition comes to this dialogue in Mexico without the strength and support it enjoyed when Guaidó proclaimed himself the country’s “president in charge” in 2019 and after the loss formal this year of the National Assembly as its last bastion after not participating in the legislative elections at the end of 2020.

In the absence of knowing what negotiating power they will actually have over future presidential elections, the most immediate test for that electoral schedule that opponents demand are the next elections for governors and mayors in November.

There is still no consensus on whether or not all the main opposition forces will attend this election, which have refused to participate in elections since 2018, considering that there are no guarantees and fair conditions for doing so.

Along with this desire to find an electoral solution, the opposition will put issues such as the lifting of disqualifications of political leaders from holding public office on the negotiating table. “Political rights for all”, It reads like another of the items on the agenda.

It will also promote the continued release of deputies and other politicians who remain imprisoned, refugees in embassies or in exile. Last September, Maduro granted a presidential pardon to a hundred prisoners three months after the parliamentary elections.

The Venezuelan population, which partly looks at this dialogue with uncertainty after the failures of previous summits, is the one that continues to suffer the worst crisis in its recent history.

To the long years of recession, hyperinflation and loss of purchasing power that contributed to millions of people leaving Venezuela since last year the impact of the covid-19 pandemic was added which further accentuated the difficulties.

Humanitarian aid will therefore be another key to this dialogue.

And, although clearly insufficient, the South American country has already taken some steps in that direction.

Last April, the UN World Food Program -which classified Venezuela among the four most food insecure countries in the world- reached an agreement with the government to mitigate the food crisis that especially affects children.

In an unusual gesture, the agreement was signed by both the government and the opposition, which in the past accused Maduro of using international aid to reinforce his government’s position and deliver it only to those who support his party.

Venezuela also faces serious difficulties in obtaining vaccines against covid-19 that cas has already been chargedi 4,000 lives and it has infected more than 300,000 people, according to data from Johns Hopkins University.

Last month, Maduro gave an ultimatum to the COVAX mechanism, which seeks to guarantee immunization to the poorest countries, by ensuring that they had not received the agreed doses despite having paid the required US $ 120 million.

Weeks later, the Pan American Health Organization confirmed that Venezuela will receive the Chinese vaccines Sinovac and Sinopharm “Between July and September” through COVAX.

The representatives of both delegations recognized this Friday the role of Mexico in hosting the celebration of this meeting.

“We want to thank our hosts, who show off a way of doing diplomacy that guarantees respect for the rights of others, to sovereignty and self-determination ”, declared Rodríguez.

Although former President Enrique Peña Nieto worked to convince other countries to abandon their support for the Maduro government, the arrival of Andrés Manuel López Obrador to power meant for Mexico a return to the foreign policy of non-intervention.

“The best foreign policy is domestic”, is one of his most repeated phrases.

With his position, AMLO recovered the foundations of the Estrada doctrine, a practice promulgated in 1930 and later enshrined in the Constitution that placed the principles of free self-determination of peoples and non-interference in the internal affairs of other countries as key elements of diplomacy. from Mexico.

And one of his most evident supports for this doctrine was precisely with regard to Venezuela, when Guaidó proclaimed himself the country’s “president in charge” and Mexico decided to distance himself from the majority line of the countries of the region, gathered in the Lima Group, to continue recognizing Maduro as the legitimate president.

Norway, which has already participated in the failed dialogue in Barbados and in other international conflict resolution processes such as the one held in Havana between the Colombian government and the FARC guerrillas, is once again acting as a mediator in this new dialogue, which counts with the US go-ahead.

“We will do everything possible to ensure that these negotiations have a satisfactory result,” said this Friday at the presentation of the process the head of the facilitation team from Norway, Dag Nylander.

“However, we remain convinced that the crisis in Venezuela can only be resolved by Venezuelan political actors (…). No one else can solve this situation for you, “he added.

Russia and the Netherlands will act as “companions” in the talks that started this Friday.

It remains to be seen if, this time, the negotiations will come to fruition between the good intentions of both parties. At the moment, it was not clarified for how many days the process will last or when it is expected that it could reach concrete agreements.