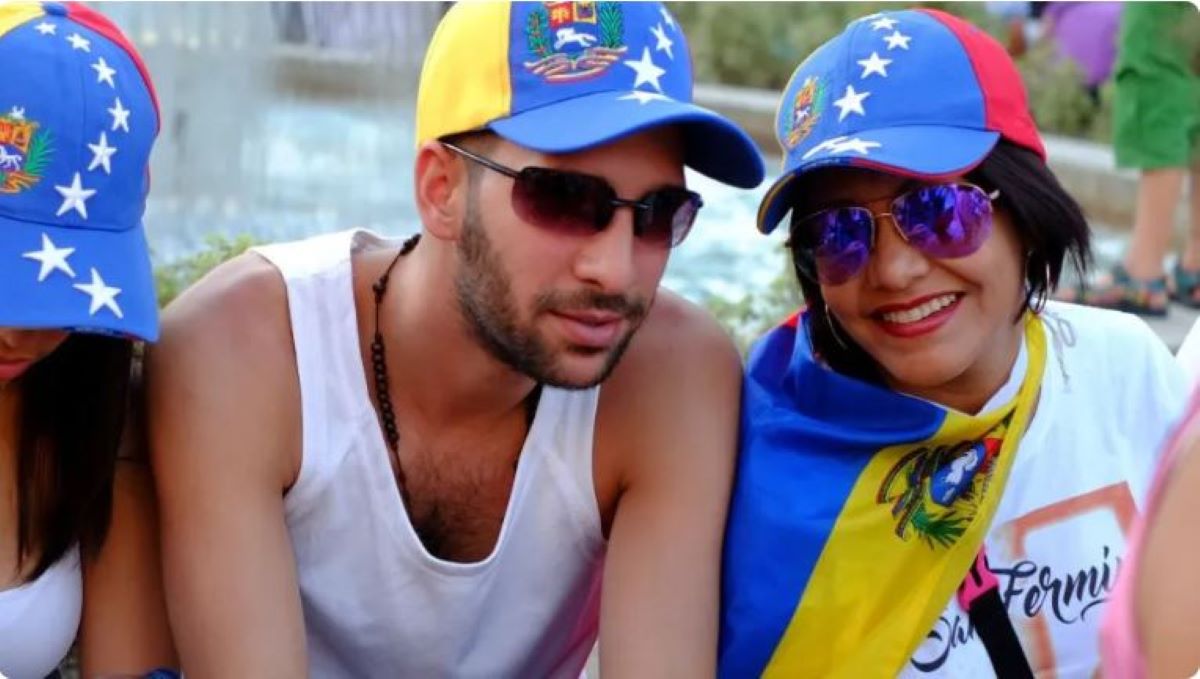 Spain is not the same today as it was 25 years ago.

In the early 1990s it was still hardly looking to modernize and Europeanize itself in various spheres.

In 1995 it barely attracted migrants compared to the average of its European neighbors. And then everything changed in a few years.

Between 1998 and 2007 Spain grew like few times in its history. Those were the years of the double boom: economic and migratory. Hundreds of thousands of Latin Americans, among other people from other regions, migrated to Spain looking for opportunities.

Through the streets of the main cities, with Madrid at the head, the chupe, the paisa tray, the cebiche and the arepa began to spread. Dominican barbershops, Ecuadorian locutorios, South American grocery stores appeared.

The impact was as visual as deep. “The best thing that has happened to Spain,” Juan Cruz Díez, a Spanish sociologist and doctor in political science from the Complutense University of Madrid, tells BBC Mundo.

In Spain today live around one and a half million Latin Americans, according to data from the National Statistics Institute (INE); but it is estimated that the real weight is much higher since many appear in the records as Spanish, for having obtained nationality or arriving in the country already with double.

But how was Spain transformed by the boom in Latin American migration? How do they continue to energize the country?

With the entry of the euro at the beginning of 2000, one of the greatest periods of prosperity in the history of the Iberian country began.

Consumption, housing demand and foreign investment increased. Spain emerged as a country of opportunities. Hundreds of thousands of Latin American citizens flocked to the burgeoning demand for labor.

“Latin Americans have been necessary for several Spanish industries, such as construction, or agriculture, where many Ecuadorians, for example, went to work,” sociologist Alejandro Portes, winner of the Princess of Asturias Award in 2019, tells BBC Mundo, among other achievements, for his work on international migration.

How much Latin Americans had to do with the economic growth of the time is difficult to measure in numbers. Their massive arrival coincides with the good health of the economy and also with the arrival of migrants from other regions of the world.

They are phenomena that go hand in hand, although Latin America was one of the regions with greater migratory weight since the boom years. And also, the one who found a adaptation apparently more placid by language and historical links.

“This suggests that much of what is attributed to the foreign population can be extrapolated to Latin Americans because there are many of them and they dominate the average,” explains Dirk Godeanu, professor of applied economics at the University of La Laguna in Tenerife.

Currently, Europe is the region with the most foreigners in Spain, closely followed by Latin America, but experts estimate that the presence of Latin Americans is much greater due to the ease with which they acquire nationality.

Both Portes and Godeanu agree that Latin Americans “made significant contributions to the country’s economic growth.”

“Its productive force became part of a value chain and the value of the Gross Domestic Product (GDP). This generated economic wealth through the labor market”, says Godeanu.

And not only that, this migratory boom in which Latin Americans played a leading role also meant a strengthening of the tax system.

“In general terms, migration had a positive economic balance in public services and helped to solve financial problems in Social Security and pensions,” adds Godeanu.

The Spanish boom period required a varied and young workforce. A crucial profile that Spain needed at the end of the 90s.

In 1975, the national fertility rate was close to 2.7 children per woman. By the beginning of the 21st century, it was at a minimum of 1.13, according to a report by the Ombudsman.

Low fertility contributes to population ageing. This has a major impact on the shrinking workforce, which weakens the potential growth of the economy.

“If the population in Spain did not decrease between 2000 and 2010, and even until the 2020s, it was due to the massive arrival of migrants, who helped neutralize the decrease in population and the low fertility of the natives,” explains Portes. .

Official data confirm that the increase in the active population in Spain has been fueled especially by foreign labor supply.

“60% of the 4.4 million new assets incorporated into the labor market since the beginning of the 2000s come from the incorporation of foreign population of working age, with much higher activity rates than the Spanish,” says the Ombudsman.

The arrival of many Latin American women of childbearing age not only contributed to rejuvenating the population, but also raised the fertility rate in the country.

Likewise, the experts also highlight the role of the arrival of Latin American migration in elder care and housework in Spain.

“The activity rate of Spanish women during the Franco regime was extremely low and with the democratic transition it began to grow,” Godeanu reviews.

“To this is added a greater population aging due to the increase in the quality of life. In a few years, a significant demand for care of the elderly and children and other domestic service activities was generated. A demand, which, in turn, ceased to correspond to a supply of native labor”, explains Laura Oso, a sociologist at the University of A Coruña in Spain.

Oso tells BBC Mundo that, at the beginning of the 90s, migrant women began to arrive attracted by this need for labor. First, from Morocco and the Philippines. Then, from the Dominican Republic and Peru.

Already then, with the years of the boom, it became generalized and Ecuadorian, Colombian, Paraguayan and other origins arrived.

“These migrants played a fundamental, key role so that younger generations of Spanish women could reconcile their work and domestic life,” says Oso.

Although yes, sociologists warn, a lot of opportunities are informally offered and not always with the best conditions, something “difficult to control in the domestic sphere”, says Godeanu.

“It is possible that some migrants accept lower conditions, but it is mainly due to the legal irregularity of the newcomers and their lower negotiating capacity,” adds Oso.

Godeanu analyzes that the arrival of many migrants pending regularization also caused an increase in the submerged economy and, consequently, a precariousness of working conditions in several sectors, especially those with a significant migratory presence, as in the case of the hotel industry.

“If there is a migration without papers, these people irremediably contribute to a larger informal economypoint.

The arrival and settlement of Latin Americans changed the Spanish urban landscape.

In Tetuán, a central Madrid neighborhood, you just need to tune up your ears to hear the Dominican accent. On several corners appear their hairdressers, grocery stores and colmados.

The scene is repeated in more neighborhoods of the capital. In Carabanchel, the largest district of Madrid and where most migrants live, it is easy to get lost among Peruvian cebicherías, Ecuadorian call shops, South American grocery stores and remittance establishments.

“All this is an example of how migration expanded the consumer market, including housing, the banking market and remittances. Are too more stomachs to feedsomething that the distribution chains know and that is why they have diversified their offers by having an important clientele of migrants”, explains Godeanu.

The impact on the urban landscape and consumption has not only been limited to traditionally working-class neighborhoods such as Tetuán or Carabanchel in Madrid.

Since 2014, with the Venezuelan crisismany Venezuelan migrants, especially from the upper classes, have found refuge and investment in the Spanish capital.

The Salamanca district, the most exclusive in the center, is proof of this. Specialists from the real estate sector have told BBC Mundo about the revitalization of this area as a result, first, of the investment in real estate of large Venezuelan fortunes, and second, of the effect that this has had on other nationals in the region.

“Those most interested in investing are Mexicans, Venezuelans, Colombians and Peruvians, coming to occupy around 60% of sales in the Salamanca neighborhood,” Ignacio Calzada, from the Promora Madrid real estate agency, specializing in high-end homes, told BBC Mundo. luxury.

For Calzada, Latin American buyers have contributed to improving trade and restaurants in the neighborhood, giving it added value. “You just have to see that the best-known restaurant groups continue to open new restaurants. The best fashion firms are also fighting to rent the best premises in the area”, she points out.

Latin American investments in the world are a consolidated phenomenon and in recent years Spain has become one of the main destinations.

According to ICEX data, the region is the fourth most important investor in Spain, only behind the United States, the United Kingdom and France, and ahead of powers such as China and Germany.

“In the economic panorama there has always been a tradition of Latin American investment, but in recent years it has accelerating and increasing” Alfredo Arahuetes, doctor of economics from the Comillas Pontifical University in Madrid, tells BBC Mundo.

Arahuetes explains that the greatest weight of Latin American investment in Spain comes from Mexico, with the example of the acquisition by Carlos Slim of the Spanish construction company FCC in the midst of the financial and real estate crisis that affected Spain between 2009 and 2015.

The investment of Latin American capital in deeply damaged sectors, such as real estate and finance, argues the expert, had a mitigating effect on the crisis.

“If a Venezuelan investor comes to buy boxes [de ahorros] in an important region like Galicia, this helps to stabilize the sector. The same with the case of Slim and FCC: he arrives, buys an important construction company and prevents it from breaking or suffering a great deterioration. Other companies failed to survive”, exemplifies Arahuetes.

Quantifying it is complex, but investment experts agree that the entry of more Latin American capital, at a critical moment like 2008, contributed to strengthening several sectorss in Spain.