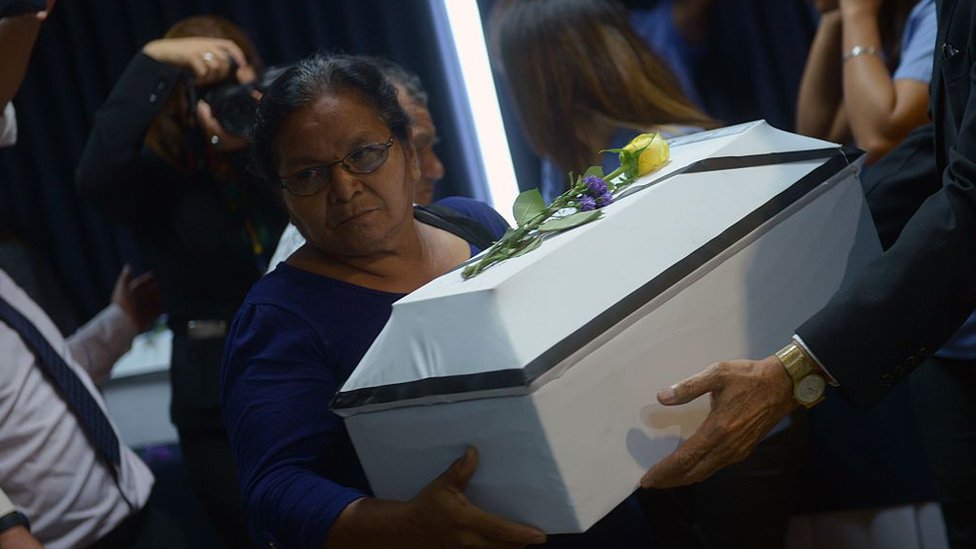 This article was published in 2019 and we updated it on the occasion of the 40th anniversary of the massacre.

Hours after the soldiers left, the fire still lit the night, permeated by the stale smell of burned human flesh.

Rosario López was one of the few that survived.

It was December 11, 1981 and, in the morning, he was going to visit his mother, who lived further down, in the hollow of La Joya, a lost village in the confines of El Salvador.

It was then that he saw them. At the command of one of the chiefs, they began to separate the men to one side, the women to the other, the children to the other side.

Suddenly he heard groans, an unusual movement: they were shooting some, cutting the throats of others, raping the younger women.

Wanted to scream, run towards his family members who were killing, to be with them, to have the same fate.

“You could hear people crying, children screaming in fear, asking not to be killed.”

But she turned around, went home to look for her children, her husband, to try to save them if she still had time.

They managed to escape shortly before the soldiers reached their door.

They hid in the bushes, climbed through the brush and through the mud, until they found a cave up there in the mountains.

Down in La Joya, the screams were hearddry bursts of gunfire. Heavy smoke covered the sky at night.

“They burned everything, everything. They killed even the pigs, the cattle, the beasts, nothing was left“.

Between December 10 and 12, 1981, thousands of soldiers who were fighting the nascent guerrilla of the Farabundo Martí Front for National Liberation (FMLN) They launched the so-called Operation Rescue in several villages in eastern El Salvador.

Some human rights groups estimate more of 800 the dead. Others in more than 1,000. They all agree that most of them were children.

For many, it was the largest massacre in recent Latin American history.

Rosario López lost 24 members of her family in a single day and waited 27 years to bury them.

She says that she was lucky, among the many who still wonder about the uncertain fate of their own: in December 2018, they gave him the remains of the last four children that had not been identified.

In reality, he only received a small box: inside perhaps there was only a bone, a tooth, a lock of hair, some of the few human remains that have been able to name it with DNA tests in recent years.

But for her it was an act of reparation, the closing of a cycle.

Before he was able to bury his mother, his brothers, a cousin in the last month of pregnancy …

Also to a baby born on December 10, 1981 and killed a day later, when the Atlacatl Immediate Reaction Infantry Battalion, a US-trained commando, razed her village.

“I just wish I could ask the military one thing before I die: to know why they killed so many creatures.”

Manuel Escalante, from the Human Rights Institute of the Central American University, tells BBC Mundo that what happened in 1981 was part of a “policy of extermination” of the armed forces against rural populations, whom they identified as the rearguard of the guerrillas .

“The Army established a strategy to eliminate all forms of life, including human life, in that rural sector under the mistaken idea that it was harming the FMLN, when in reality what they were massacring was the civilian population,” he explains.

The Salvadoran Army has not recognized its participation in the massacre and he assures that he does not have any document of the time that corroborates those facts or the intervention of his forces in these towns.

The government also denied it for years, until 2012, when the then president, Mauricio Funes, asked for forgiveness on behalf of the State after a conviction by the Inter-American Court of Human Rights.

“I remember that and it breaks my soul: in a house they wrote in blood on a wall: ‘One dead child, one less guerrilla.’ They were innocent children, what guerrillas of what, they were only children ”.

Among the ashes, he saw the first signs of horror: the razed town, strewn with corpses that were beginning to decompose.

Some faces were still familiar to him: one son of the Chavarrías, the oldest of the López, that of the Pérez.

It was then that he also found the body of his sister-in-law, with her legs spread, her coat raised, her underwear removed.

“She was the youngest, the prettiest of all,” says López in a telephone conversation with BBC Mundo.

Mejía, who was then 37 years old, first covered her. Then he buried him as best he could, among the more than 300 bodies that were scattered around the village.

He returned to the cave.

They lived there in hiding for five yearsHidden in terror, in a panic of being discovered, until Red Cross officials found them ragged and hungry in late 1986.

“We ate some banana that we hunted, we drank water from the river. Some days we went without eating ”.

Wilfredo Medrano, representative of the survivors before the IACHR, assures BBC Mundo that the operation was part of a series of strategies designed from the United States to combat the insurgency in Latin America.

“Under the government of Ronald Reagan, almost US $ 1 million daily, which went to military supplies, training, food, collaboration of advisers or the formation of the counterintelligence battalions that went to train the Southern Command (in Florida) or Georgia ”, he affirms.

In his opinion, the US implemented war techniques in El Salvador that had even failed in Vietnam, such as forced displacement, the destruction of towns, bombings and the annihilation of populations.

The United States government, for years, has ensured that its aid was destinedgives to the consolidation of democracy in El Salvador.

When the American press published reports on what happened in December 1981, the then undersecretary of state for human rights and humanitarian affairs, Elliott abrams, dismissed the complaints as “Communist propaganda“.

One day after the reports, he would certify to Congress that “fabulous” steps were being taken in El Salvador in favor of democracy.

Reports declassified years later showed that Abrams was aware of what happened at El Mozote and deliberately withheld the information from the Senate.

February 13, 2019 / Hearing before the United States Congress of Elliott Abrams, designated then as President Donald Trump’s special envoy to Venezuela.

Ilhan Omar, Democratic Congressman from Minnesota: “On February 8, 1982, you testified before the Senate Foreign Relations Committee on the foreign policy of the United States in El Salvador. At that hearing, you rejected as communist propaganda a report on the El Mozote massacre, in which more than 800 civilians, including two-year-old children, were brutally murdered by US-trained troops.

“During that massacre, some of those troops boasted of having raped 12-year-old girls before they were killed.

“You later said that the US policy in El Salvador was a ‘fabulous achievement.’ Do you still think it was like that?

Elliott abrams: “From the day that President (José Napoléon) Duarte was elected in a free election (1984), until today, El Salvador has been a democracy. That is a fabulous achievement. “

Ilhan Omar: “Answer yes or no, do you think the massacre was a fabulous achievement that occurred under our responsibility?”

Elliott abrams: “That is a ridiculous question and I will not answer it.”

Ilhan Omar: “I’ll take that as a yes. Answer yes or no, would you support an armed faction within Venezuela that engages in war crimes, crimes against humanity, or genocide if you believe they were serving the interests of the United States as they did in Guatemala, El Salvador, and Nicaragua? ” .

Elliott abrams: “I’m not going to answer that question.”

Rosario is 72 years old and says that for almost four decades her task has been to remember every moment, every face, of that December 11th.

Shortly after the massacre, he wrote the names of each of his dead in a notebook, so that time could not erase them from there, although the memory of some is increasingly vague in his memory.

But it says that his greatest fear is to die too and not see that justice arrives to the guilty.

Almost 40 years later, no one has been convicted.

A 1993 amnesty law prevented an investigation into what happened for more than 20 years.

Finally, in 2016, a ruling from the Supreme Court of Justice declared the law unconstitutional and, shortly after, a judge ordered the case to be reopened.

In September the case suffered a new blow.

The Salvadoran magistrate Jorge Guzman, which sought to end impunity for a massacre committed by the military, announced his resignation in rejection of a controversial congressional measure related to the president Nayib bukele, for which a third of the country’s judges were dismissed.

The rule does not affect magistrates who see cases against humanity. Guzmán, 61, is in charge of the investigation of the El Mozote massacre and was able to stay, but chose to resign as a sign of protest.

The magistrate regretted that it is the “victims” who will see “as so many times, their pilgrimage to justice has been delayed.”

“One only asks for justice and there is no justice. But I will continue speaking, I will go where I have to go, because what is done in this land, in this land is paid for, ”says Rosario.