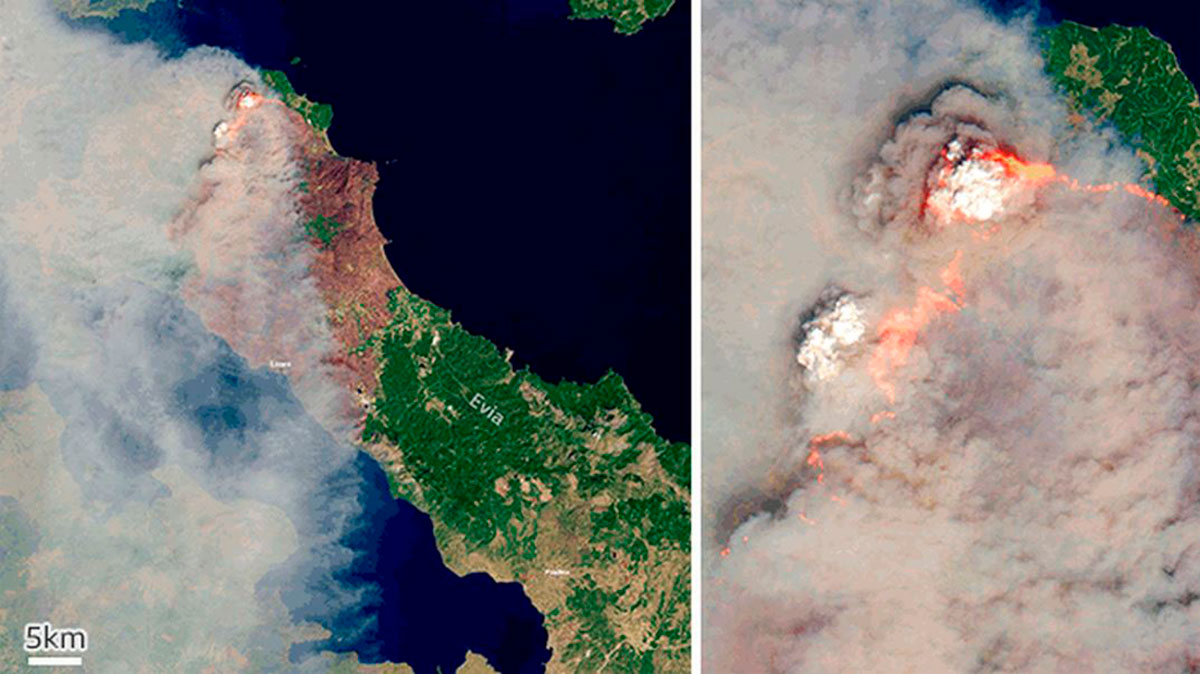 The world woke up this Monday with the announcement of “a red alert for humanity.”

The United Nations Intergovernmental Panel of Experts on Climate Change (IPCC) released its long-awaited report on how global warming will change our planet in the coming decades.

It is an analysis of more than 14,000 scientific articles, the most complete to date.

According to the scientists’ conclusions, continued greenhouse gas emissions could breach a key global temperature limit in just over a decade.

They also believe that “it is not possible to rule out” a rise in sea level approaching 2 meters by the end of this century.

At BBC Mundo we share 5 of the most important revelations of the document, according to the BBC’s Environment correspondent, Matt McGrath.

1. Climate change is widespread, rapid and intensifying (and it’s up to us)

The dangers of global warming are no longer something distant, something that impacts people who live in other distant places: it is already part of our daily lives.

“Climate change is not a problem of the future, it is here and now and affects all regions of the world“Said Friederike Otto, a researcher at the University of Oxford, and one of the many authors of the IPCC report.

The phrase “very likely” appears 42 times in the 40 pages of the “Summary for Legislators.” In scientific terms, that means that it is 90-100% certain that it will occur.

The clearest of these points refers to humanity’s responsibility for climate change.

There are no more misunderstandings, we are the ones who can stop this situation.

2. The temperature may rise more than expected

When the last IPCC report on climate change was published in 2013, a temperature rise of 1.5 ° C was considered a safe global limit for warming.

But in the political negotiations that led to the Paris climate accord in 2015, many developing countries and island states pushed for a lower temperature limit, arguing that it was a matter of survival for them.

A special report in 2018 showed that the benefits of staying below that limit were enormous compared to a world 2 ° C warmer.

Getting there would require cutting carbon emissions in half, essentially, by 2030, and reaching net zero emissions by 2050.

This new report reaffirms this finding. In all scenarios, the threshold is reached in 2040.

If emissions are not controlled, the 1.5 ° C rise could be achieved in about a decade.

While the situation is very dire, it is not a sudden fall into calamity.

“The 1.5 ° C threshold is a politically important threshold, of course, but from a climatic point of view, it is not the edge of a cliff where, once we exceed 1.5 ° C, all of a sudden it will all become very catastrophic, ”explains Amanda Maycock, a scientist at the University of Leeds.

“The lowest emissions scenario we evaluate in this report shows that the level of warming stabilizes around or below 1.5 ° C later in the century. If we went down that path, then the impacts would be significantly avoided, ”he says.

3. Sea level will continue to rise, no matter what we do

In the past, IPCC reports have been criticized for being too conservative in assessing the risk of sea level rise.

The lack of a clear investigation caused previous reports to exclude the possible impacts of the melting of the Greenland and Antarctic ice sheets. 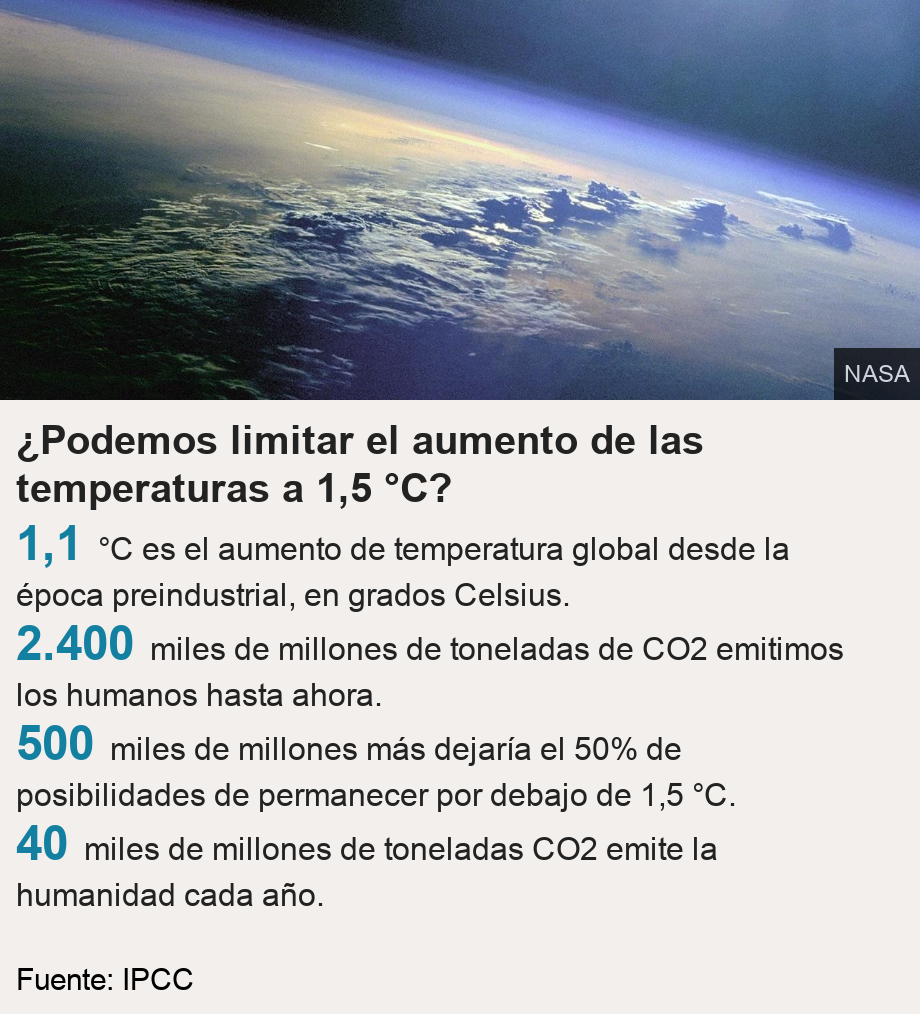 The report now shows that, under current scenarios, seas could rise above the likely range, rising as much as 2m by the end of this century and as much as 5m by 2150.

While these are unlikely figures, they cannot be ruled out under a very broad scheme of high greenhouse gas emissions.

It’s a pretty negative scenario, but even if we control emissions and keep temperatures around 1.5 ° C by 2100, the waters will continue to rise in the future.

“The danger behind these rising sea level numbers is very scary in the long run,” says Malte Meinshausen, a professor at the University of Melbourne and another of the report’s authors.

“The document shows that even with a warming of 1.5 ° C, we are looking in the long term at two to three meters of sea level rise and in other scenarios it is much higher. That is just scary, because it may not be at the end of our life, but it is just around the corner and it will compromise this planet.

Even if sea level rise were relatively mild, it would have unavoidable side effects.

“With the gradual rise in sea level, those extreme sea level events that have occurred in the past, just once a century, will occur more frequently in the future“Says Valérie Masson-Delmotte, co-chair of the IPCC working group that prepared the new report.

“Those that occurred only once per century in the past are expected to occur once or twice per decade by mid-century. The information we provide in this report is extremely important to consider and prepare for these events. “

Scientists have long been concerned that our planet’s climate might be more sensitive to carbon dioxide than they thought.

Generally, experts use a term called “equilibrium climate sensitivity”To express the range of warming that could occur if CO2 levels were to double.

This time, the margin has been narrowed and the authors choose 3 ° C as the most likely.

Why is this important?

“Now we can narrow down this number with a good degree of certainty and then we can use it to make much more accurate predictions,” says Piers Forster, a professor at the University of Leeds and another author of the report.

“That way, we know that net zero will really deliver.”

5. The role of methane

Another big surprise in the report is the role of methane, another gas behind global warming.

According to the IPCC, about 0.3 ° C of the 1.1 ° C from which the world has already warmed is the result of methane.

Addressing those emissions, coming from the oil and gas industry, agriculture and rice cultivation, could be a big win in the short term.

“The report nullifies any remaining debate on the urgent need to reduce methane pollution, especially from sectors such as oil and gas, where the reductions available are faster and cheaper,” says Fred Krupp of the United States Environmental Defense Fund. United.

“When it comes to our planet’s overheating, every fraction of a degree matters, and there is no faster and more achievable way to slow the rate of warming than by reducing man-made methane emissions.”