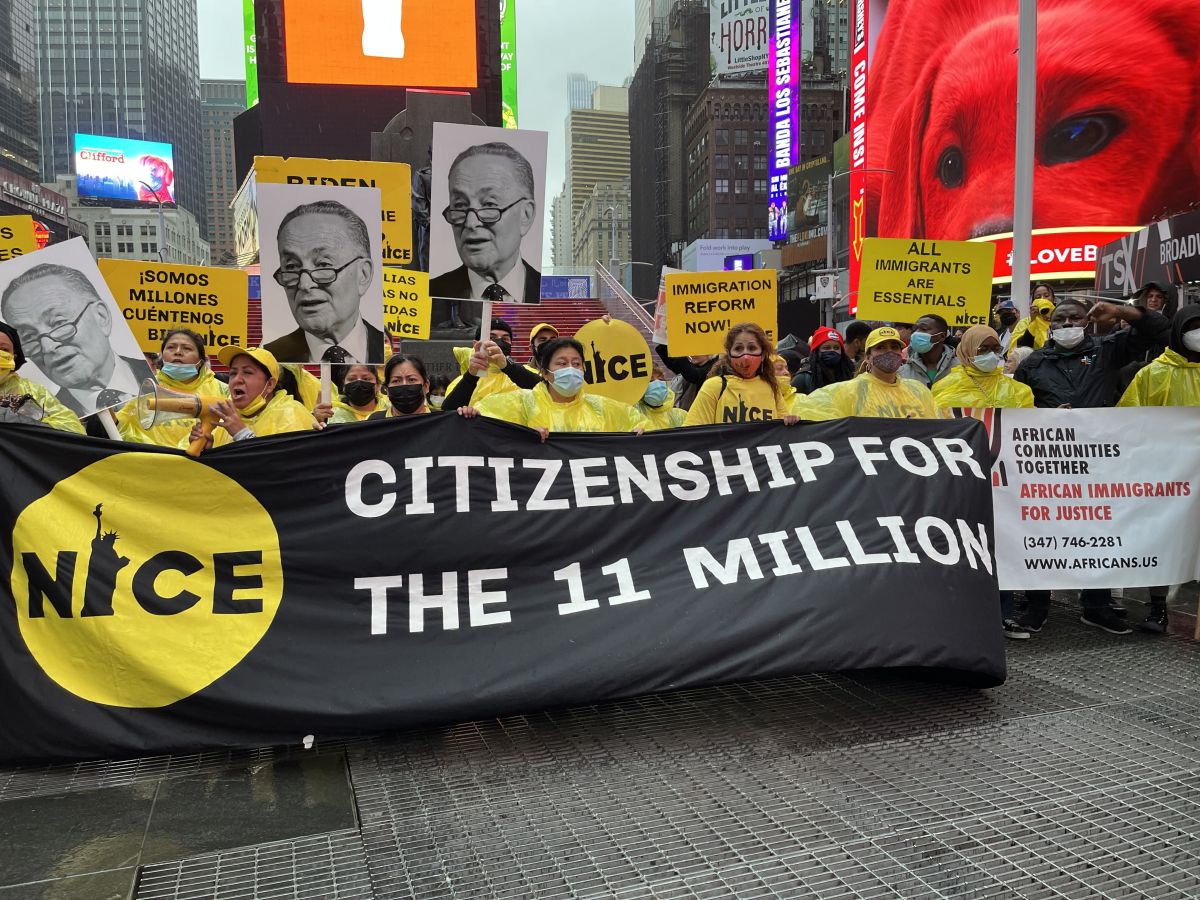 Although he made progress in 2021 on immigration issues, President Joe Biden faces significant challenges this year, such as ending highly criticized programs against asylum seekers and controlling the border, as well as trying to fulfill his promise of a path to citizenship for the undocumented.

“Democrats have been a bit … maybe too optimistic about their chances,” said Andrew Selee, president of the Migration Policy Institute. “They have wanted to get to things that the political moment still does not support and they end up with little or nothing… It is the first year. All governments arrive and want to do everything, then they adjust expectations to reality ”.

The biggest challenge will be to resurrect a plan to protect the undocumented, because it was contemplated in the Build Back Better (BBB – Rebuild Better) agenda, but the rejection of parliamentarian Elizabeth MacDonough to a plan C or ‘parole’, as well as the Senator Joe Manchin’s (West Virginia) refusal to endorse that $ 1.75 trillion bill leaves Democrats and President Biden in a bad position.

“It is a commitment that Biden made in the electoral campaign and if he did not know about some immigration under this Congress, that would create a lot of people who would lose faith in the Democratic Party regarding immigration,” Flores acknowledged.
He added that the November 8 elections will be marked by the immigration issue, which could be problematic for Democrats as they try to maintain control of Congress.

“Right now the Biden Administration still has a chance to do something before the legislative doors close,” he said.

Austin Kocher, Research Professor at the Transactional Records Access Clearinghouse (TRAC) at Syracuse University, doubts even that if Democrats do “something good” on immigration it will have a direct impact on the election.

“I don’t think there are many incentives for Democrats to fight very, very hard for immigration, because even if they fight very hard and pass good policy, I don’t know if that automatically translates into a winning electoral strategy in 2022,” he said. “I’m not really convinced that that (topic) really appeals to a lot of people.”

Experts indicate that the border faces a serious crisis, due in large part to the policies imposed by former President Donald Trump, but now to the inability of the Biden Administration to end them.

They refer to the Migrant Protection Protocols (MPP) or Remain in Mexico and the expedited expulsion of immigrants under Title 42, implemented in March 2020 for health reasons in the face of the COVID-19 pandemic.

“If they fail to control the border, it will be a problem … and controlling the border is to reduce the number of people arriving without documents … or increase the documents,” said Selee. “If they can’t control it, it will be a disaster in the midterm elections, it will be one of the issues that punishes the Democrats.”

In August, the departments of Justice (DOJ) and Homeland Security (DHS) published in the Federal Register a notice of a proposed regulation to improve the processing of asylum applications, which Selee refers to, as it would create an asylum system different.

The program released by the Secretary of Public Security, Alejandro Mayorkas, highlights the possibility of quickly attending to those who request asylum and sending their cases to court, where they would not wait more than six months, but it would also allow for the expeditious expulsion of those who do not. meet the isolation requirements.

This project, as well as the MPP, are directly related to the situation in the immigration courts, where there are already more than 1.5 million backlogged cases, so they require more changes.

“The immigration judges are working as hard as they can, they have limitations. The Trump Administration really attacked them. They hired a lot of quite conservative judges, “warned investigator Kocher.

Although in fiscal year 2021 about 1.7 million immigrants arrived at the border, almost 1.5 million were expelled for different reasons, up from one million under Title 42, according to data from the Customs and Border Protection (CBP) agency and others under Title 8, by failing to comply with asylum requirements.

Researcher Kocher indicates that, being one of the programs most criticized by immigration experts, Title 42 would be a priority to end, but if the coronavirus pandemic, now with the Omicron variant, does not allow the Administration to return to “certain normalcy, ”then that strategy will continue to cause headaches.

Vice President Kamala Harris leads the development plan for Central America, which has made slow progress, although last year ended with the promise of several companies for an investment of $ 1.2 billion dollars.
The objective is to offer options to those from Honduras, El Salvador and Guatemala to prevent them from migrating to the United States for economic reasons.

The project also integrates the Sembrando Oportunidades program, implemented with Mexico, which aims to grant funds for agriculture and connect students with companies in the region.

Due to the slowness of the plan in Central America, criticism of Vice President Harris has increased and she could be the main political victim of the immigration failures.

“Vice President Kamala Harris may be that (political) victim, but life is long. We are in the first year. He has a lot of time to reposition himself, ”Selee considered. “The problem is that they have not made much progress in the Central American countries. The objective has a better chance of ordering things in the long term ”.

In its fiscal year 2021 report, the U.S. Citizenship and Immigration Services (USCIS) acknowledged the delays it faces.

“Across the agency, the volume of pending cases increased, as well as the associated processing times,” he acknowledged.

However, President Biden’s actions have enabled the agency to push through various changes, leveraging its resources, for example, reusing biometric data for 2.5 million applicants since March 2020.

However, one of his greatest accomplishments is helping family reunification with the Family Reunification Task Force.

“USCIS … established a parole process and approved approximately 100 people … during fiscal year 2021 to help reunify families separated by the Zero Tolerance policies and related policies of the previous administration,” it said. .

Attorney Susan Cohen, president of Mintz Immigration Practice and author of the book “Journeys From There to Here: Stories of Immigrant Trials, Triumphs and Contributions”, highlighted that the main challenge is to further reduce delays in cases of visa assignment of all kinds , something that he said he had not seen in 35 years practicing in his profession.

“(USCIS) is taking so long that their work authorization expires and their employers have to ask them to get off the payroll and come back until the card arrives. This is a growing problem, ”Cohen warned. “The arrears have become so unsustainable that people are filing lawsuits across the country now to force Immigration Services to do their job and produce the card.”

One issue on which all the experts consulted agreed was to ensure the permanence, without a major challenge in court, to the ‘dreamers’ benefited under the program for Childhood Arrivals (DACA).

“DACA Dreamer and Recipient Protections. We saw that the Administration has proposed a new rule, ”said Flores, who acknowledged that the challenge will continue in court. “We see a great challenge in the case of Texas that has tried to invalidate the program.”

Selee highlighted the rule being prepared by the Biden Administration, which was criticized as seen as a prelude to the failure of immigration protection in Congress.

“Formalizing DACA a little more would be a huge achievement … or TPS, they are things that they could do, that give more security to people and increase the number of permanence,” he considered.

Attorney Cohen joined that position and recognized the intention of the Biden Administration to seek to protect the ‘dreamers’, but also warned of the risk in court.

What to pay attention to

The experts highlighted other migration issues, due to the complexity of this issue at the national level:

>> The implementation of ICE on the new rules for the persecution of undocumented persons.
>> The future of Remaining in Mexico, as there could be a risk that it will become “permanent.”
>> The approval of more ‘green cards’ to reduce delays for beneficiaries of work visas, such as H-1B.
>> The new refugee plan, which seeks a greater number of beneficiaries.
>> The future of labor visas in Central America.