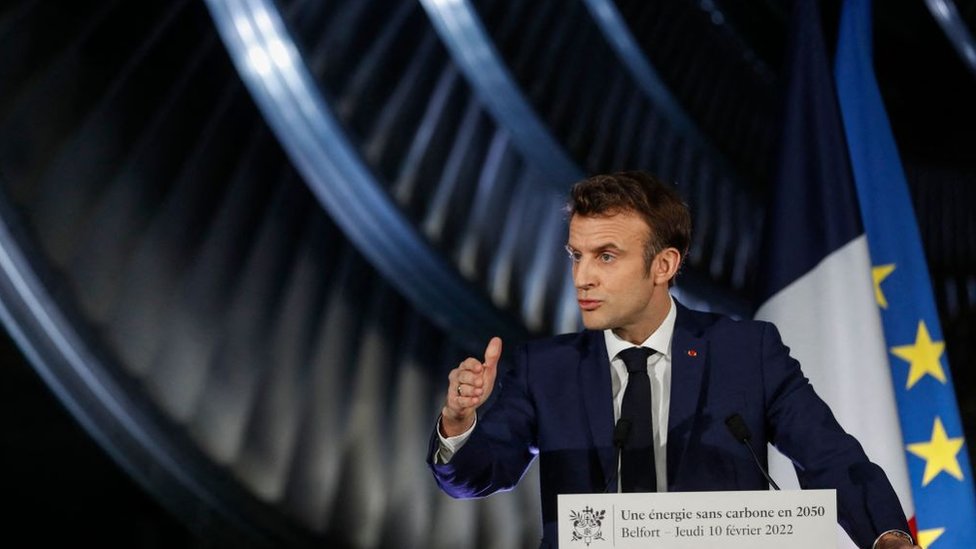 The world is at an energy crossroads: reliance on fossil fuels is becoming increasingly unsustainable.

Oil and gas prices have skyrocketed in the last two years, and with them the costs of electricity production and electricity bills.

And, as if that were not enough, the war in Ukraine has highlighted Europe’s energy vulnerability due to its high dependence on Russian gas.

“The time has come for the nuclear renaissance”French President Emmanuel Macron recently stated.

Like Macron – who five years earlier had promised to reduce atomic generation in France by a third – many have changed his stance on energy nuclearreviled since the Fukushima accident in 2011.

“A change in position is being observed against atomic energy throughout the world, although it has intensified in the last year with the rise in the price of gas, and the current crisis has been the last straw,” the disseminator explains to BBC Mundo. of Spanish nuclear science and technology Alfredo García.

Can it replace gas, oil and coal?

“Unfortunately, it has had to be a war that shows that we cannot depend so much on fossil fuels,” says García.

These still generate at least two-thirds of the energy electricity and greenhouse gas emissions in the world, according to different studies by international organizations.

Air pollution from burning fossil fuels caused 8 million deaths in 2018, 1 in 5 deaths worldwide, according to a study by Harvard University.

At current production rates, emissions are projected to rise 14% this decade, scuppering the 2015 Paris Agreement targets of reducing global temperature rise to 1.5°C by the end of the century.

So, if there is something that everyone agrees on, it is the need for an electricity production model that does not depend on fossil fuels.

and there is two options available: the nuclear and the renewable.

Greenpeace believes that it is possible to do without both fossil and atomic energy.

However, proponents of nuclear power question whether this is feasible: renewables have limited generating capacity, require large amounts of space and materials, and depend on weather conditions to power the grid.

That is why they believe that the most realistic is increase so much the production atomic as of renovable to end up reducing coal, gas and oil to zero.

This would not happen overnight: just build a nuclear power plant and put it into operation usually takes between 5 and 10 years.

“Changing an energy model is not easy or fast and the process must be gradual. Progressive substitution requires electrification of several sectors and a firm commitment to nuclear energy and renewable energies, working as a team. The total cost is difficult to quantify, but the process would have to be carried out in less than three decades”, explains García.

How is nuclear energy produced?

By splitting a heavy atom -usually uranium 235- more neutrons are produced in a multiplying effect, unleashing a chain reaction in a fraction of a second.

This releases neutrons, gamma rays, and large amounts of energy; the intense heat increases the temperature of the water and produces steam.

The steam spins the reactor’s turbines, which activate a generator to produce electricity and ultimately feed it into the grid.

Fusion consists of releasing enormous amounts of energy by forcing atomic nuclei together instead of dividing them.

This is similar to the reaction that occurs in stars, such as the sun.

A lots of they consider it the definitive solution for the future supply of humanitysince it hardly pollutes or consumes resources and could produce almost unlimited energy.

But successfully recreating it on Earth requires high technology that is still in development.

Experts believe that nuclear fusion could take center stage in the second half of this century.

Last February, the European Commission (EC) classified nuclear energy as “green” when considering it necessary for the transition towards a generation without emissions carbon dioxide, the main cause of the greenhouse effect.

Nuclear power plants emit an average of 28 tons of this gas for every gigawatt hour they produce, well below the 888 for coal, 735 for oil and 500 for natural gas, according to the EC technical report.

The sun emits almost triple of CO₂ that atomic85 Tn/gWh, while hydroelectric and wind power are the cleanest with 26.

According to the same study, nuclear power also generates very low amounts of sulfur dioxide and nitrogen dioxide – which can generate acid rain – as well as chemical waste, and consumes fewer mineral and fossil resources compared to other sources.

The UN, for its part, warned in 2021 that global goals to curb global warming cannot be achieved if atomic energy is excluded.

He specified in a report that in the last half century nuclear energy has saved the equivalent of two years of global carbon dioxide emissions.

“Nuclear energy is as green and safe as renewable energies. It is not a matter of opinion, but of comparing multiple peer-reviewed studies that go in the same direction”, says García.

But not everyone agrees that nuclear power is clean.

“Although nuclear energy does not emit greenhouse gases at the same level as fossil fuels, it actually emits more CO₂ per kWh than any of the renewables, since a nuclear reactor needs a fuel to generate electricity and its production does emit gases. of greenhouse effect”, assures, for her part, the representative of Greenpeace.

Bennasar cites data from the International Energy Agency (IEA) when noting that, even tripling the world’s nuclear capacity, the reduction in carbon emissions would be only 6%an impact that it considers insufficient to meet the climate objectives.

Critics of nuclear energy also allege that extracting uranium causes environmental damage, that decommissioning a plant is expensive and polluting, or that there is a risk of an accident or military attack on atomic facilities, very low but with potentially disastrous consequences if it happens

And what about the waste?

Another of its main arguments is that nuclear fission produces radioactive waste with a high polluting potential.

The residues, which mostly come from spent nuclear fuel in power plants, are solid and liquid materials that contain radioactive isotopes.

They can be toxic for decades to thousands of years and their treatment is very complex. For example, in the case of high-level waste, it must be stored in three different stages, the last of which under the ground between 200 and 1,000 meters deep.

“The nuclear industry has not been able to find a satisfactory and safe technical solution to this problem,” the Greenpeace representative told BBC Mundo.

Alfredo García, however, maintains that atomic energy “is the only one that is fully responsible for the cost of managing its waste, which is handled with the highest safety standards, and for which there are scientifically agreed technological solutions” .

Build and commission a nuclear power plant it is extremely expensive.

For example, the plant under construction at Hinkley Point C, in the south of the United Kingdom, with 3,200 megawatts that will provide 7% of the country’s energy from 2025, will cost close to US$30,000 million, according to estimates.

Atucha III, which will be the fourth nuclear power plant in Argentina with 1,200 megawatts, will cost US$8,000 million, according to the agreement signed in February between this country and China.

While an atomic plant often exceeds US$6 million per megawatt of capacityIn the case of combined cycle gas plants, the cost is around half a million.

Nevertheless, producing electricity with atoms is much cheaper not needing a huge and continuous supply of fuel.

Although uranium is an expensive material, enormous amounts of energy can be generated with small doses.

Which countries bet on nuclear energy?

With 96 operating reactors producing more than 90 gigawatts, The United States accounts for nearly a third of global atomic energy production.followed by China and France, with more than 13% each, according to data from the International Atomic Energy Agency (IAEA).

In France, nuclear plants generate 70% of electricity productionwhich places it as world number one in this aspect.

Emmanuel Macron announced an energy plan for the coming years that includes six new reactors with an estimated cost of around 50,000 million euros.

Meanwhile, Germany planned to close its last three nuclear power plants this year, but the war in Ukraine has put the country between a rock and a hard place.

The president of the German economic institute Ifo, Clements Fuest, recently declared that the plants should continue to operate “at least until they overcome dependence on Russian gas, that is, foreseeably for several years.”

Europe is divided on atomic energy: the governments of Germany, Austria, Denmark, Spain, Luxembourg and Portugal refuse to promote it, as opposed to the self-styled “nuclear alliance” of Bulgaria, Croatia, Finland, France, Romania and Slovenia, which is they add the Czech Republic, Hungary, Poland and Slovakia.

In Latin America, nuclear energy only contributes 2.2% of electricity production of the region with seven reactors: three in Argentina, two in Mexico and another two in Brazil.

And whoever bets the most on the atom is thousands of kilometers away: china is running as the next world superpower in nuclear power.