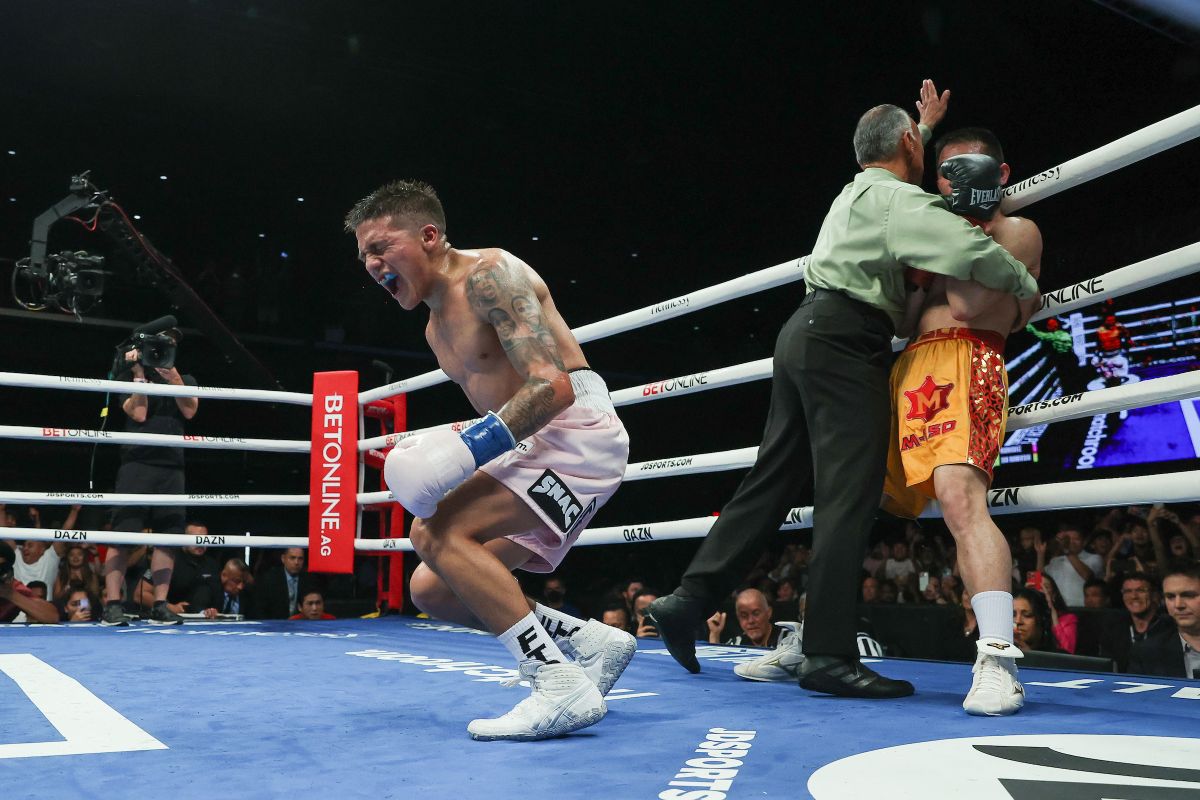 Jesse “Bam” Rodríguez, in his pink shorts and gloves, threw himself full length into the center of the ringeuphoric, incredulous and bathed in glory. His recent win had instantly made him a boxing legend in his native San Antonio, Texas.

It happened this Saturday in that city and boxing analysts are still trying to describe what Jesse Rodríguez has achieved: a young man of only 22 years of age who five months ago had won the super flyweight world championship after entering the ring as an emerging challenger, and who now as star of a billboard destroyed one of the most fearsome male pleaders in recent times, the Thai Srisaket Sor Rungvisai.

The triumph of baby-faced young man who has the distinction of being the youngest world champion in boxing and the first to be born in the 2000s, was not entirely surprising; Rodríguez was a betting favorite. But knocking out 35-year-old veteran Sor Rungvisai, a guy who was part of memorable battles with Roman “Chocolatito” Gonzalez and Juan Francisco “Gallo” Estrada, was something he honestly didn’t see coming.

The most impressive thing was seeing the way in which Rodríguez (16-0, 11 KOs) faced and worked his rival, with a display of boxing that can only be described as virtuous: mobility, variety and volume of blows, dazzling speed, fluidity and also cunning to protect himself, as if he were a long-standing fighter.

“Bam” knocked his opponent down in round 7 with a left hand and then finished him off in round 8, but from the first bell he masterfully dominated and was not at all intimidated by a man who has dynamite in his fists, who is worth mentioning, was coming from a long inactivity.

“We know what we are capable of and that is why we decided to take this fight from the beginning,” Rodríguez said. being interviewed in the ring by the DAZN reporter.

The legend of “Bam” Rodríguez is born

Jesse Rodríguez, with an outstanding amateur career and undefeated in his first 14 fights as a professional, achieved the unthinkable on February 5 in Phoenix: he defeated former Mexican world champion Carlos Cuadras to obtain the vacant WBC super flyweight title.

It turns out that the fighter from San Antonio took that fight after Cuadras’ scheduled rival -ironically the aforementioned Sor Rungvisai- got sick in the previous days, presumably from Covid-19 and had to cancel. Rodríguez, who was preparing for a flyweight fight on the same card, dared to move up in division to seek the belt.

This Saturday, after his brilliant performance in San Antonio, “Bam” reflected on that audacious decision.

“I am grateful for (facing) Cuadras, not only for giving me experience, but because he put my name in the public and that is why I am here tonight in the main event in San Antonio,” said Rodriguez, who is trained by Robert Garcia.

There have been four fighters who have dominated the 115-pound division in recent times. “Bam” Rodríguez has already defeated two of them: Cuadras and Sor Rungvisai. But when they asked him if he wanted to go for the other two who are Estrada and “Chocolatito”, the young left-handed guard stepped aside, not out of fear, but because his older brother, Joshua Franco, holds a world title in the same division and “Bam” does not want to affect his plans.

Franco is the WBA “regular” super flyweight champion and has agreed to face “Gallo” Estrada in August, although the negotiations for said fight have been complicated.

Given this, it is possible that Jesse Rodríguez will drop to 112 pounds. On Saturday he said that he will do what Garcia’s trainer tells him to do.

“We are here to stay,” warned “Bam” Rodríguez, who This Monday he signed a contract extension with Matchroom Boxing, from promoter Eddie Hearn.

Hearn is rubbing his hands because Jesse is clearly a special fighter who can fight in different divisions. Promoters often exaggerate when talking about his fighters, but Hearn said it perfectly on Saturday:

“San Antonio, you have a superstar on your hands.”