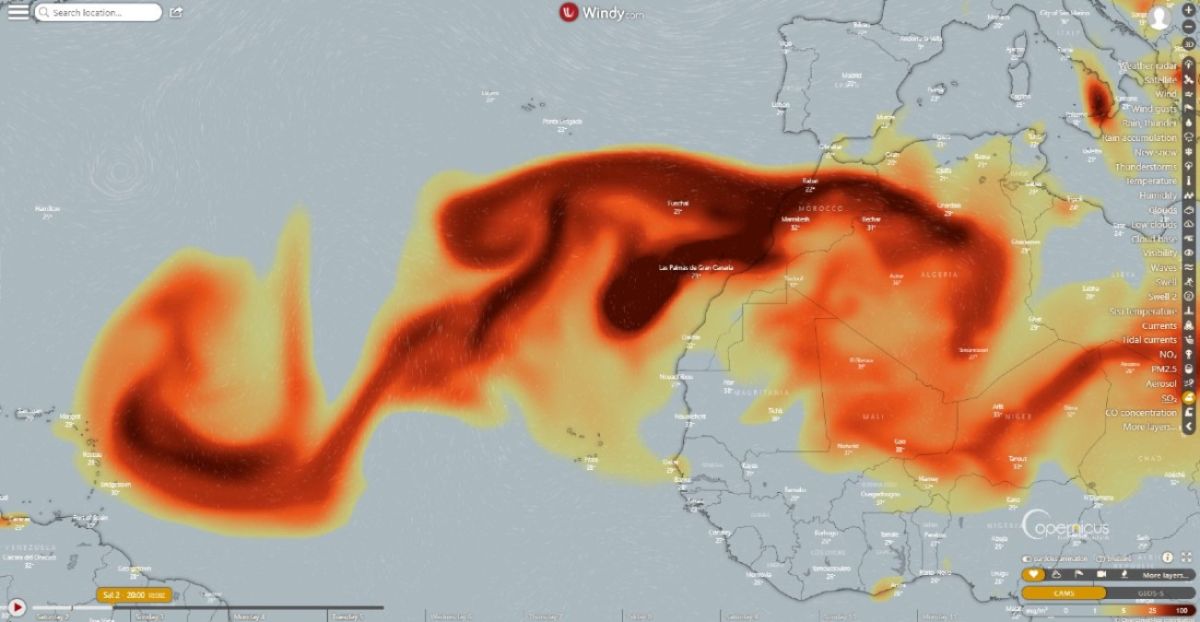 Sulfur dioxide is a colorless chemical, but it can affect the eyes and respiratory tract after prolonged exposures – Photo: Copernicus Satellite / Courtesy.

A thick cloud of sulfur dioxide from the eruption of the volcano on La Palma is currently over Puerto Rico, as detected by the European Space Agency (ESA) on Sunday. As a result, air quality on the Caribbean island has declined significantly.

“Copernicus satellite images show that the particulate cloud is entering the Caribbean, and a dense part is just over Puerto Rico this Sunday, so the use of masks is recommended,” said the Society for Astronomy of the Caribbean (SAC).

As we have told you on American Post News, the eruption of the Cumbre Vieja volcano produced a commotion in the Canary Islands, leading to the evacuation of 5,000 people in La Palma. Now, the wave of damage crossed the ocean and reached the Caribbean.

The Caribbean entity indicates that images obtained by ESA satellites, which monitor emissions into the atmosphere, have detected an extensive cloud of sulfur dioxide coming from the volcano in the Canary Islands, which has been active since mid-September.

Meanwhile, the Atmospheric Chemistry and Aerosol Research Laboratory of the University of Puerto Rico detected an increase in the amounts of fine and coarse particulate matter on the island, which arises from the chemical reactions of sulfur dioxide and volcanic emissions.

The Caribbean Astronomical Society indicates that forecasts suggest that the cloud could reach the Dominican Republic during the night of Sunday.

In another study, the Department of Natural and Environmental Resources determined that the air quality in Puerto Rico is currently unhealthy. The agency recommended that children, the elderly, and people with respiratory complications reduce outdoor activity and use masks to prevent health problems.

The entity reminds us that sulfur dioxide irritates the eyes and the respiratory tract.

The National Meteorological Service (SNM) in San Juan indicated that SO2 combined with Sahara dust had been observed over Puerto Rico, with a predominance of the latter over the region. The agency also reported that air quality will be affected until Tuesday, with an improvement anticipated for Wednesday.

With information from EFE and Telemundo.