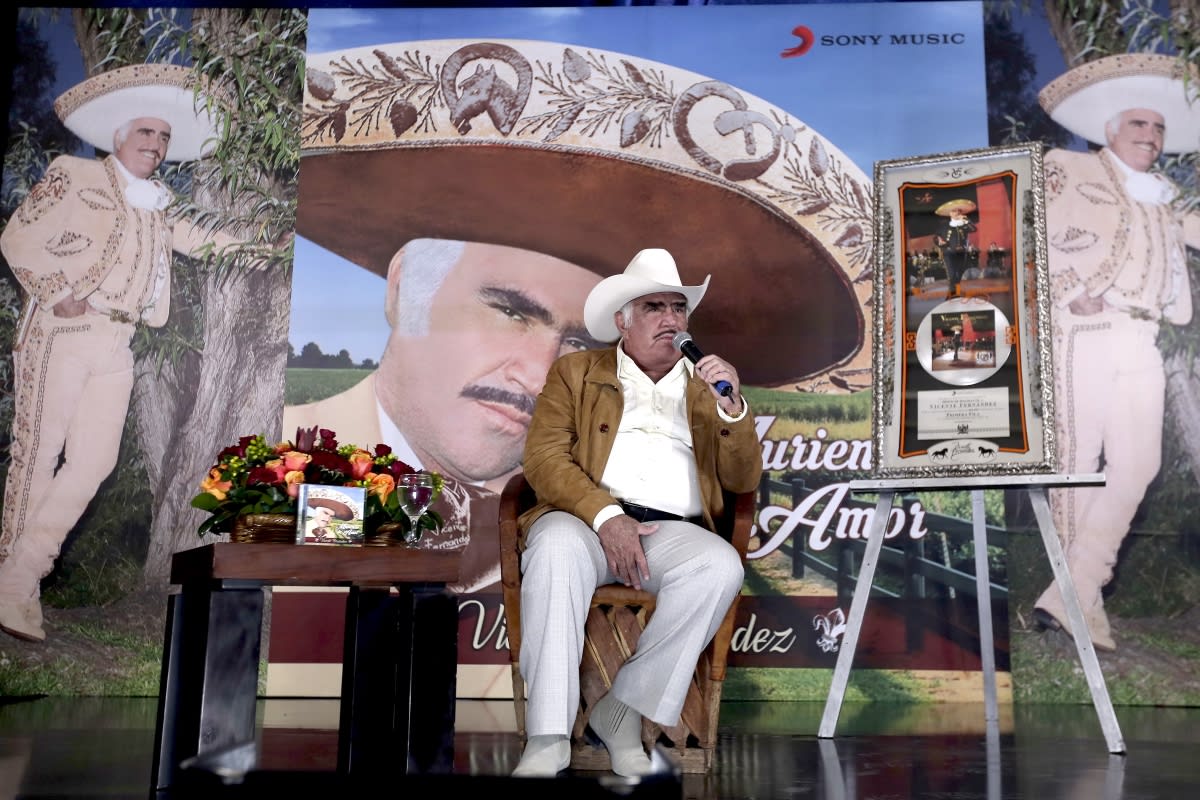 Risky. It was reported that a man managed to sneak into the room where the Mexican singer Vicente Fernández is currently hospitalized, the subject entered arguing that he was a member of the press, which caused the security measures to be increased even more in the hospital.

It was last August 9 when The Charro of Huentitán He was admitted to an emergency hospital after he suffered a fall on his ranch The Three Foals, which since that incident has caused the singer to continue hospitalization and with a slow, but good recovery.

Vicente Fernández in the hospital

Given this, many media and the general public have been aware of his recovery, to such an extent that several reporters have been standing guard outside the hospital, along with several fans of the singer, causing security to grow even more for thus avoid larger crowds or possible intruders.

However, on August 24 it was reported that a man had sneaked into Vicente Fernández’s room, arguing that he was a member of the press, managing to circumvent the security of the hospital and the extra security that the family has for the singer, causing a strong mobilization.

A man sneaks up to Vicente Fernández’s room

And it is that, due to these agglomerations, this man managed to slip away without being noticed by the security of the place. According to several portals, including the news portal Bandamax and the Instagram account of @ chicapicosa2, this man managed to enter by posing as a reporter:

“It was reported on August 24 that a man sneaked into Vicente Fernández’s room. The subject, who posed as a reporter, managed to enter the room where the singer was recovering and receiving treatment ”, you could read as a message in the caption of the @ chicapicosa2 publication

What was your goal? Man managed to sneak into Vicente Fernández’s room

After this, the man who managed to sneak into Vicente Fernández’s room, had alleged intentions to take photographs of the singer’s current state and thus be able to circulate them through various media, violating the right to privacy of the Charro de Huentitán.

They assure that “I wanted to give him a remedy for his recovery”: Man managed to sneak into Vicente Fernández’s room

However, and to the surprise of many, there is another version that was also shared by the account of @ chicapicosa2, who received a message where in addition to publishing the photograph of the subject, it was said that this man, who managed to sneak into the room of Vicente Fernández, had the purpose of giving “a remedy” to the singer so that he would recover.

In the publication, it is possible to see a man with a gray vest and a white shirt and pants, while wearing brown shoes and his cell phone in his hand, while his hand was on his ear, in the image also After posting the photograph of the alleged subject, it was also commented that he wanted to give him a remedy for his improvement.

Due to this unfortunate incident, where a man managed to sneak up to the room where the singer Vicente Fernández was hospitalized, the place redoubled security, in order to avoid more situations like these, also protecting the perimeter of the area and not only its bedroom.

Ana María Alvarado, owner of the portal’s entertainment news blog Bandamax, managed to share an image in which it was possible to see the subject who entered the singer’s room; Fortunately, neither the subject nor the incident escalated to major consequences.

They assure that Vicente Fernández could not sing again

Bad news for the Charro de Huentitán! Vicente Fernández had to undergo a medical procedure, which apparently will be the reason that he will not be able to sing anymore. The singer underwent a tracheostomy, but his doctor mentioned to a famous entertainment magazine that he can speak, but not sing.

A couple of days ago, the last medical report that the Fernández family made public was released, in which it was mentioned that Don Vicente was induced to a surgery, better known as a tracheostomy, which was necessary for him to speak. Filed Under: A man managed to sneak into Vicente Fernández’s room

Spoke of the aftermath

The mexican magazine TV and novels, spoke with a doctor to seek his opinion regarding the case, in order to understand what the Charro de Huentitán is going through. In this interview, the doctor touched on issues of great importance, where he clarified various doubts that others have had and that is expected to be enlightening both for fans and the media, who have kept an eye on the singer. Filed Under: A man managed to sneak into Vicente Fernández’s room

In an interview with TV and novels, the surgeon doctor graduated from UNAM, Manuel Alvisúa, mentioned what could happen to the voice of the Mexican singer, after having been induced to a tracheostomy. In this interview, Manuel Alvisúa commented to the media that the chances of him singing again are very low.

“They are not very encouraging”

In accordance with Televisa News, the scenarios facing the singer and producer, are not very encouraging. The first is that if the doctors treating him decide to leave the tracheostomy, in order for Vicente Fernández to speak, he will have to close a valve with his fingers, and the second, in case they do decide to remove the valve and make a closure, they will have to wait for a time to see your progress.

In one of the questions that the doctor was asked, he mentioned that the consequences of his fall could have been fatal. For this reason, it is that he is going through a fatal trauma, which could have brought him worse problems, he could even have died at that precious moment, as indicated by the previous medical report. Filed Under: A man managed to sneak into Vicente Fernández’s room

“He could have broken his neck”

“Based on the official medical report, the trauma suffered by Mr. Vicente Fernández was low to the neck, he could have ‘broken his neck’, because there is the medulla oblongata and the respiratory center.” Said the doctor who offered his opinion. , to the media that questioned him about the past medical report.

In the interview, the doctor clarified that the tracheostomy performed on the Mexican singer will affect his voice, since air handling will not be the same and phonetics will be what is most affected. For this reason, perhaps the voice of the singer will be the most affected of the entire medical process to which I am exposed. Filed Under: A man managed to sneak into Vicente Fernández’s room

Will not sing again

“The tracheostomy that they practiced definitely affects his voice because of the air handling, it is all phonation.”, The doctor mentioned, in that interview that was carried out a couple of days ago and where he assures that he will be able to speak again, but because of how affected his throat will be, he may no longer be able to sing. Filed Under: A man managed to sneak into Vicente Fernández’s room

“Speak yes, sing no”, mentioned the doctor in an interview. “When speaking, sometimes we need to draw air from the esophagus, and that air is what will make his voice not very clear,” were part of his words with the media, where they assured that if the singer comes out winning this battle, it will be difficult for him to sing again.