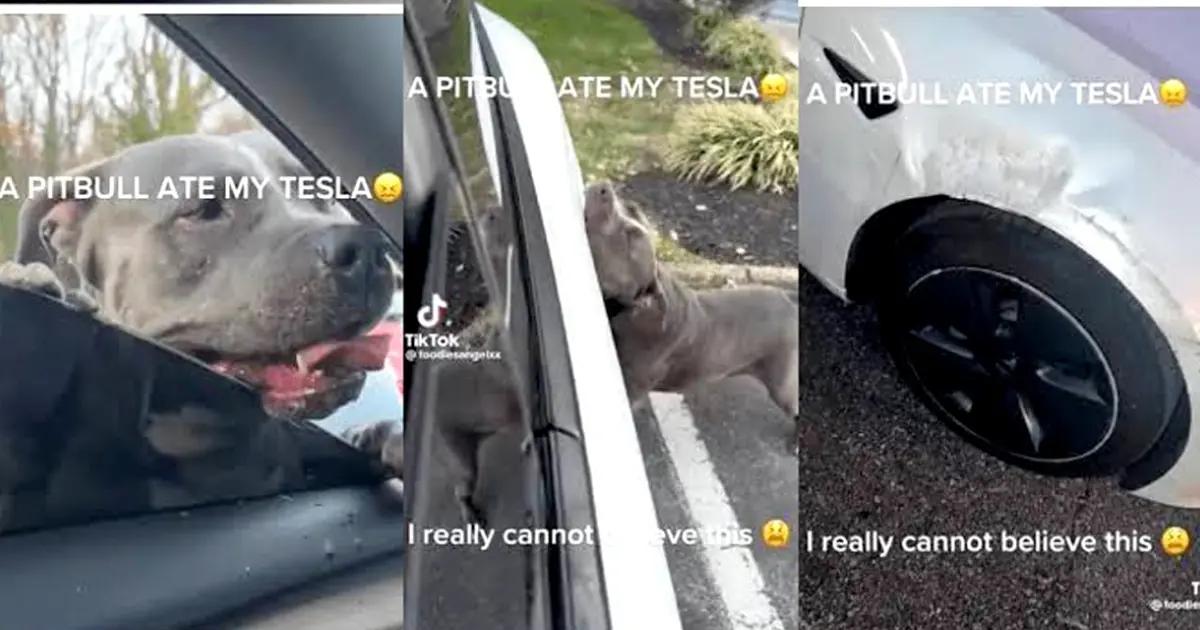 They are considered dangerous, and others say they are aggressive. The truth is that these dogs have great power so the consequences can be serious. An example is a pit bull that measured the strength of his jaws with a Tesla EV.

The victim we are talking about is an American user that in TikTok identified on TikTok as ‘toodiesangelxx‘ or Liv, who recorded the dog’s fury while sheltered inside her Tesla Model 3. The enraged dog was focused on destroying her vehicle.

Unable to access it, the canine took it out on the car, and when the attack was over, the vehicle’s owner was able to show the disaster caused by the pit bull.

The “TikTok” started with the image of the dog chewing on one of the wheel arches of the bodywork, sinking its fangs directly into the sheet metal. Then the user showed a shot where she had the window slightly down while the dog tried to make its way towards her.

As the pit bull failed to reach her, the animal moved towards the rubber frame of the glass, bit it, and pulled on it until it was almost completely removed.

In just 28 seconds, you can see how the pit bull finished off a Tesla. The video included photos of how the two fins of the Model 3 were damaged.

What is the most aggressive pitbull?

This breed has been used for illegal fights on multiple occasions, enhancing aggressiveness and conditioning its character. However, American Pitbull Terriers are some of the most loving, loyal, and protective dogs.

Here is the first video:

However, when the pit bull knocked down the Tesla Model 3, the comments pointed out the fragility of these vehicles.

As for why the user did not leave the place, in a second video that also went viral, she explained that after the pit bull finished with a Tesla, she said she was waiting for the police because, in the US, you can go to trial for this type of aggression and get a large compensation if you are the victim.

Then, in a third video, she explained that she did not want to run the dog over and felt safe inside the car. Moreover, she allegedly had to stay because her kids should have returned from school shortly, and she wanted to keep the dog away from them.

There is also the fourth video with further explanations, but we could not publish it here because of the violent scenes. You can see it here. It seems that the dog would have previously bitten his owner. Proof of this is the media collage included in the fourth video, which displays the alleged owner’s wounds.