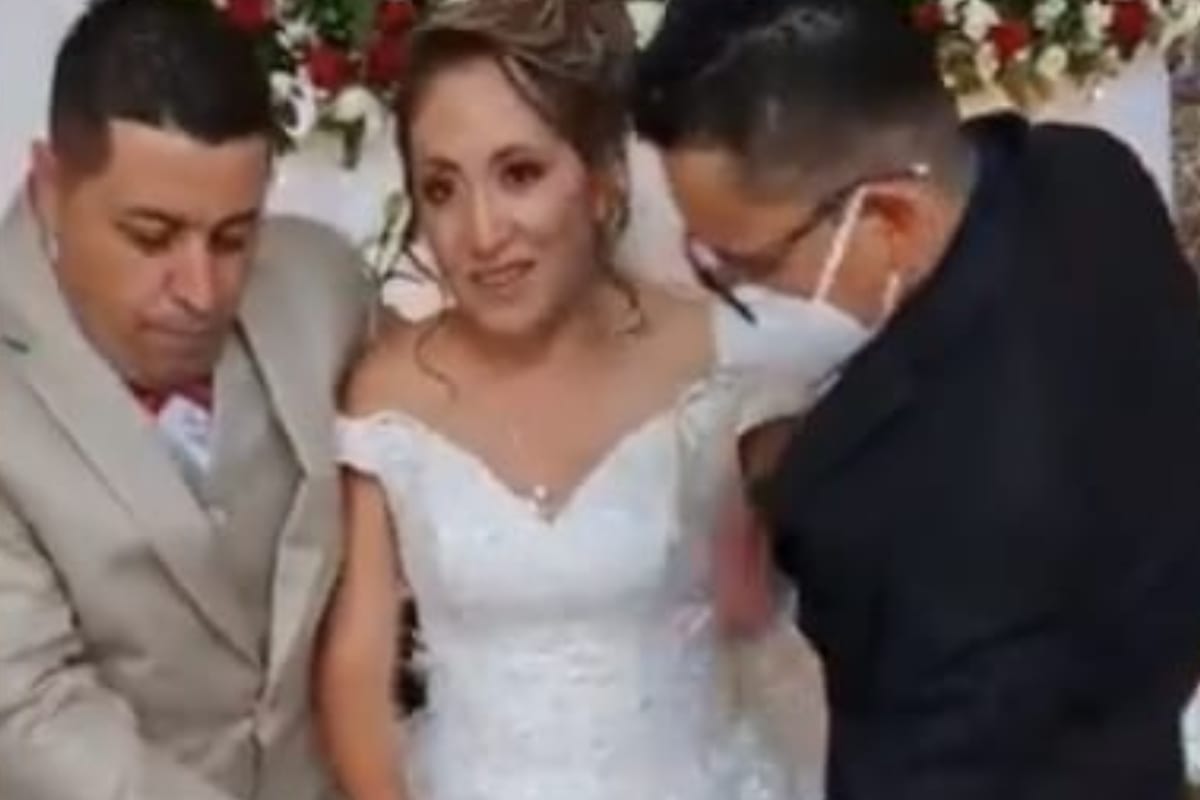 A surprise for everyone! A guest arrived at his friends’ wedding, wearing a unique gift on his shoulder. The people at the wedding did not hesitate to approach such a strange scene and notice that one of those present was a gas tank, wrapped in gift paper and that caused the laughter of the bride and groom, who gratefully took the photograph of I remember with the guest.

Although it wasn’t a blender, a set of glasses, or a set of towels; the couple looked more than happy and joking with the young man who brought such a unique present. The curious present of the wedding, which took place in Mexico, went viral on social networks, where people did not hesitate to make jokes about the situation and rejoice for the gift the bride and groom received.

The video that was broadcast on social networks shows a young man entering the event room where a wedding is being held. The person who records the moment, focuses the camera towards the entrance of the room, where a man arrives and surprises the guests at the strange gift that he carries between his shoulders.

The young man, who is dressed in a formal suit, adjusts the mask with his free hand, while the other holds the unique wedding present. He is not sorry, nor is he shy; He, very sure of himself, begins to approach the table of the bride and groom, who when they see him get up from their seats to greet him. Filed Under: Guest Surprises Strange Gift

In the short clip, it is observed how few guests are in the celebration and of course, most of them wear face masks; a sanitation measure that must be implemented in the festivities that take place. But that is not surprising, what is striking is how several get up when they see the young man, to observe the present that he carries on one of his shoulders.

While ‘Paloma Negra’ is playing, set by a group of Mariachis, the applause is heard towards the guest and that large gift that he has been carrying. The others would think that it is strange, but the bride and groom seem to be happy to see their guest with the curious present, which because of his figure, they already imagine it to be. Filed Under: Guest Surprises Strange Gift

The guests closest to the bride and groom’s table remain attentive to such a meeting, the newly married couple approaches the young man, with smiles and a couple of laughs, noticing the present that the young man was carrying. What was that unique gift about? Nothing more, nothing less than a tank of gas.

It seems that it was an ideal gift for the bride and groom, more because of the situation that Mexico went through in a matter that the gas workers union organized a work stoppage, a couple of weeks ago, so that people on social networks, considered that it was a perfect gift for the couple that was getting married at the time. Filed Under: Guest Surprises Strange Gift

Guest surprises strange gift: “I wonder what it will be”

Between laughs and jokes, the couple appreciated the gift that their guest had brought them; even the groom began to load the gas tank, to make sure it was full and the couple’s friend began to laugh about the reaction of the couple, while some curious people approached and recorded the gas tank that the young man carried as gift.

“I wonder, what is it?”, Mentions the guest, laughing at the expressions of the couple, who do not hesitate to laugh at the curious situation they are living with their guest. The bride and groom very happily approach the young man to pose in the photograph of the memory, placing the famous gas tank in the middle of the three. Filed Under: Guest Surprises Strange Gift

The identity of the guest, or the couple, is not known. But the video on social networks quickly went viral, obtaining positive comments from the audience for the curious gift this couple received; some made fun of it, others mentioned that they were lucky to receive a tank of gas and many others only commented on the good friend that the young man is.

As the situation has been, it shows that the young man thought of a functional gift for the couple and that it will not be wasted. Without a doubt, it will make the use of gas tanks fashionable as a good gift at weddings and something that other couples can implement in the months of gifts that they usually place. Filed Under: Guest Surprises Strange Gift

Users on social networks have commented on the video that was posted on different platforms, instantly going viral. Internet users thought that it was a good gift, so they did not understand why people had decided to make fun of the young man who gave the gas tank.

“Super gift and very necessary for the home, many times we give away things that they don’t even use, I don’t see why they offend. Maybe it’s envy, they would already like guests like this young man ”, mentioned a user on one of the pages that posted the video of the gift, highlighting how useful it is for the newly married couple.

“A round of applause for this guest”

Internet users also highlighted that this guest did think of a good gift for the wedding, since on different occasions they usually give things that are not necessary and he did give something that will be necessary for the newlyweds. For this reason, it was a good idea of ​​him to give the gas tank to the bride and groom.

“A round of applause to that guest, he does think about what is really needed when he is just starting to furnish a house,” mentioned a follower of said account, in the comments section. He was quickly seconded by more people, who did not hesitate to say that he was correct.

This gift would seem like it is not necessary for the married couple, but quite contrary to what others might think, it is a very functional gift. According to users on social networks, people who live in Mexico and have the need to buy a gas tank, know how expensive it can be and that they give it to you, they are a beneficiary.

“Only those who have bought their cylinder know that apart from being expensive it is hyper necessary, I had borrowed my mother’s until recently and buying mine was to pay $ 1800 pesos ($ 90 dollars) for the cylinder and gas. It is preferable to give something that one knows they need to things that end up saved for a long time. “, Replied a young woman, in the comments.

There was no shortage of people who remembered their wedding day and the gifts they gave him, praising what this young man did with his friends and that will be of use to the newly married couple. This person mentioned that if someone likes to give a nice wedding gift, they could give boxes of soaps, cleaning brushes, or other items, just as necessary while starting to make a home.

“What a gift father … those are the best memories a gift on that special day. A box with soap, fibers, cleaning brushes and various cleaning utensils and what a great ‘stop’ that gift gave us. “

Although people may come to see this gift as something out of place, the truth is that in Mexico it is considered a great gift, since in these times the price of gas tanks has risen, reaching approximately $ 100 dollars. For this reason, someone giving you a cylinder is a good thing.

“A gift of almost 2 thousand pesos, with everything. Congratulations to the man who left prejudices behind and thought about what is necessary when one becomes independent, “said the young woman in one of the pages where this gift went viral, mentioning that it is very useful when you become independent with your partner and start to make a home. TO SEE VIDEO CLICK HERE

Some commented that it is a practical and useful gift, among so many glasses, objects for the bed, towels or photos; So this young man really showed off with his friends and gave something that will be very good for his new home, for this reason the teasing is left out and the effort he made should be appreciated, since it is not economic at all.

“It is something super useful and practical, everyone gives away photos, china or glasses. Here in my country a 15 kg gas cylinder is worth the equivalent of approximately 1,400 Mexican pesos, “said the man on social networks, where the most curious wedding gift that someone has given in recent months was viralized in video.