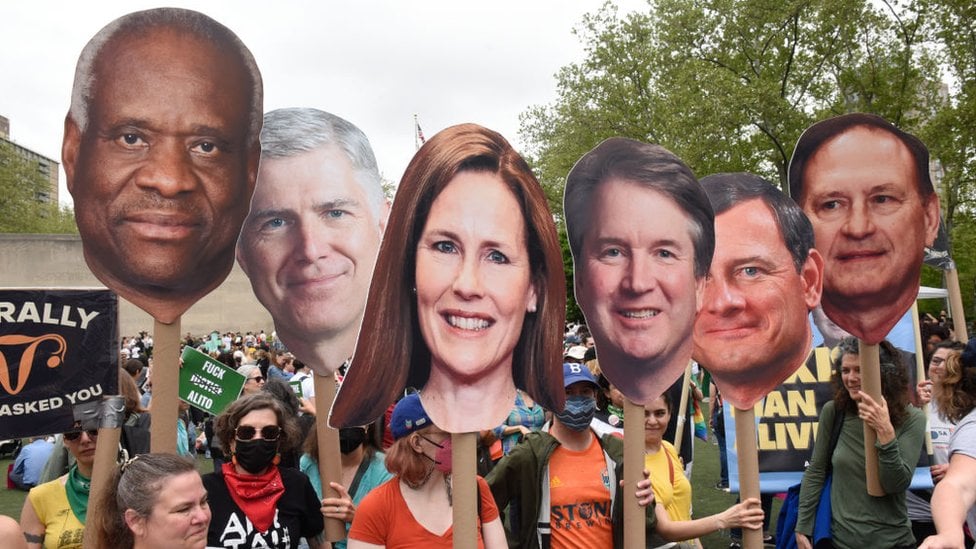 The United States Supreme Court’s decision to strike down the constitutional right to abortion, known as Roe v. Wade reversed a 50-year legal precedent in that country.

The supreme justices voted 5 to 4 in favor of repealing the law that gave millions of women access to abortion and now it is up to each state to legislate independently on the right of women to voluntarily end a pregnancy.

The Supreme Court, made up of nine magistrates, has a conservative majority of 6-3, as a result of the appointments achieved by Republican governments, particularly that of Donald Trump, under whose mandate three judges were appointed to that highest court.

That being the composition of the court, what are the chances of reversing this seismic decision for American society?

Academic experts pointed out to BBC News Mundo the different routes that could be taken, although they stated that it would be a great challenge to make any of them work.

The recent ruling issued by the Supreme Court with which it revoked the constitutional right to abortion was around a new case – the third in the last couple of years – that it had under consideration.

Supreme Court decisions are final. no appeals. The only way his recent decision could change is if another case tried in the lower courts went all the way to the lower court and the justices had to issue another ruling on it.

Nothing prevents them from hearing a new case, but that would imply that the Supreme Court reevaluates a decision with the same magistrates and their same ideological tendencies.

“It is highly unlikely that we will see a different outcome with this composition of the Supreme Court,” Jessica Waters, dean of undergraduate studies at the Department of Justice, Law and Criminology and a faculty member in the School of Public Affairs, told the BCC. from American University, in Washington DC.

“A different decision would imply a dramatic change in the composition of the court, so it is very unlikely that we will see a change of opinion,” he declared.

Change of composition of the Supreme Court

The Supreme Court has a 6-3 conservative majority. A change in that trend would require that several of the conservative magistrates left their position.

“Essentially it would take at least two changes of conservative justices (for centrists or free them),” said Professor Frank Ravitch, chair of Law and Religion at Michigan State University School of Law.

The decision that reversed Roe vs. Wade went 5-4, because one of the conservative justices and chief justice, John Roberts, did not vote for the majority opinion, although he did issue a parallel and concurring opinion to uphold a Mississippi state law that limited the scope de Roe vs. Wade.

However, if a new abortion case were to come before the court again, Roberts would surely follow the opinion of his Conservative colleagues to the letter, Professor Ravitch opined.

The appointments of magistrates to that court are for life. Serving justices, particularly conservative ones, are relatively youngso it is very unlikely that a conservative justice will open a vacancy that can be filled by a more liberal one.

Furthermore, if that remote possibility were to occur, it would have to happen under President Joe Biden or a subsequent Democratic administration that appointed liberal justices.

For both academics interviewed, that composition of the conservative majority will not change in the immediate future.

“The size of the Supreme Court is not mandated by the constitution,” says Frank Ravitch. “The number of magistrates has changed many times, but not since the 19th century.”

Congress would have to authorize the addition of more justices, a process called “court packing” (literally: pack the court) and thus change the bias of the Supreme Court.

It’s an initiative that has been on the table for some time, but the current setup in Congress makes that highly unlikely.

Democrats hold half the seats in the Senate and Vice President Kamala Harris has the tiebreaker vote, however, they are not enough to prevent the filibuster, which is a powerful strategy by which legislative processes can be stymied indefinitely. To block filibustering, the votes of 60 senators are needed.

But adding magistrates is still risky, it states. “If it comes to adding four magistrates now, the door is opened for another government to add another four later to tilt the bias.”

Still, “there are too many mechanisms to go through,” says Jessica Waters. “A lot of changes at the federal level both in Congress and in the judiciary to make that happen. The Supreme Court has been made up of nine magistrates for a long time and there is no tendency for that to change”.

Even though federal law takes precedence over state law and both laws may exist in parallel, there may be conflict.

According to Waters, in recent days we have seen that there are some states that have postponed the implementation of the Supreme Court ruling.

“Some 13 states had laws on their books that would automatically ban abortion once Roe v. Wade and we are already seeing those laws being challenged in some states,” he declares.

But those measures do not have much force, because the Supreme Court has made it very clear that states can restrict or even ban abortions altogether.

“What I think is that this (the postponement) is giving the states a little more time instead of reaching a different conclusion than the Supreme Court,” says the dean of undergraduate studies at American University.

However, expectations are very low. “In 26 states we will see immediately, or within the next two weeks, total or near total bans. We know that some of those state laws that were put in place automatically don’t even make exceptions for situations like rape or incest,” she says.

There could be ways to legislate abortion rights and reinstate Roe v. Wade as the law of the land.

Congress would have to pass laws that codify the right to access large to abortion services in United States.

Currently, those who favor abortion do not have enough votes in Congress to pass such laws. But with the midterm legislative elections, there is certainly a possibility of a different composition in the Senate that implements changes in the future, suggests Jessica Waters.

If in the November legislative elections there is what they call a “blue Wave” (a surge of support for the Democrats), in theory it would be possible to have a Senate pass pro-abortion legislation.

President Biden would have to sign it into law and he has given indications that it would. That would be a forward route.

Frank Ravitch of Michigan State University believes that a reaction to the court’s decision to abolish the right to abortion, combined with the recent ruling in favor of carrying weapons, could influence the outcome of the legislative elections. “That has a lot of suburban parents, a lot of women, and a lot of men who support women’s decision to abort very concerned.”

but all that it will take time: that the new Congress enters into session next January, that the bill be proposed, that it be approved and voted on in both chambers and then promulgated.

For now, Jessica Waters notes, the United States is entering a period in which the availability of abortion services will depend on where you live either how much money do you have, to travel to a state where abortion is legal. “I don’t see that changing in the near future,” she says.

“Furthermore, there is a greater likelihood that more states will enact much stronger anti-abortion laws.”