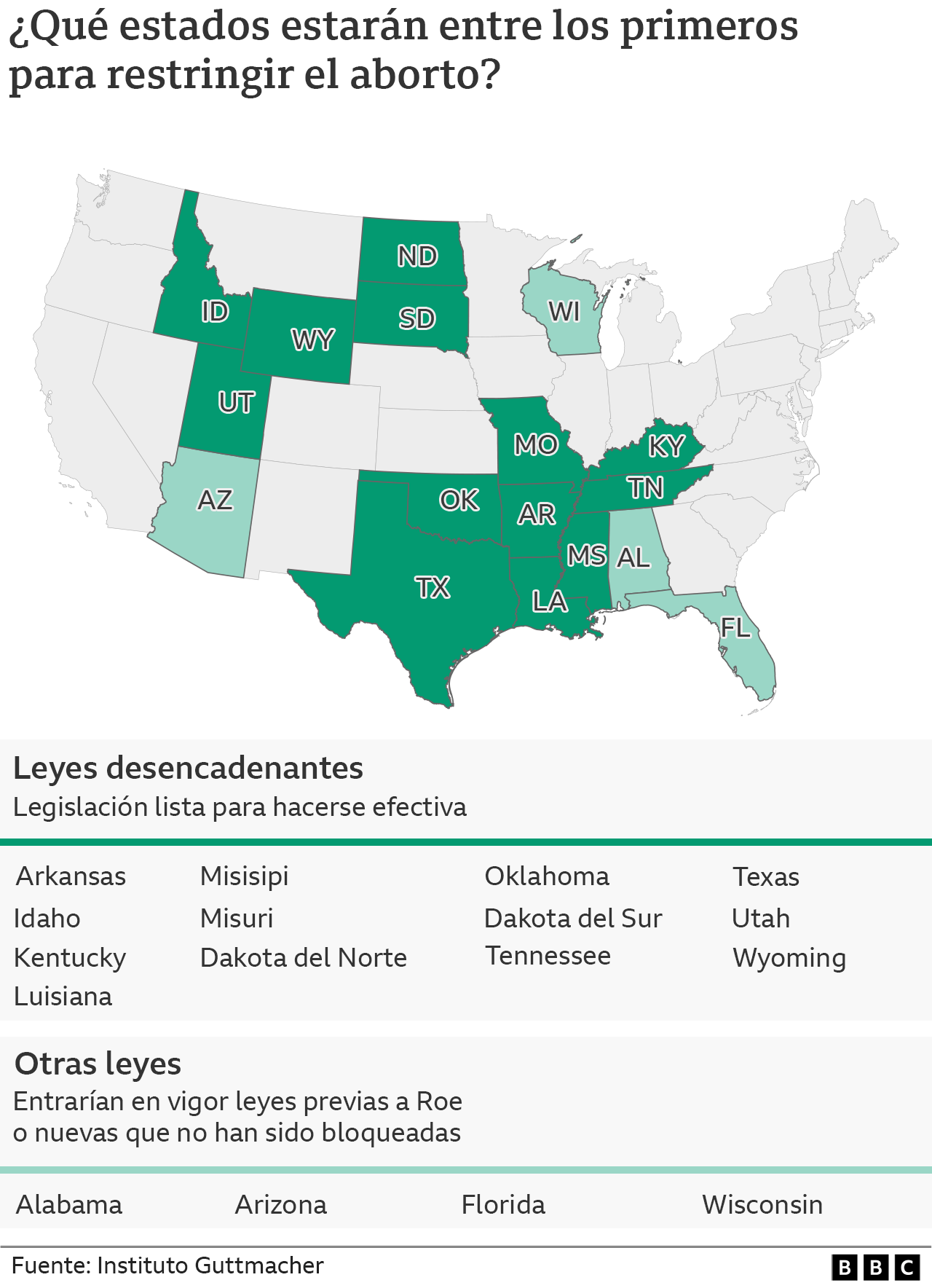 It was the chronicle of a death foretold: it was advanced by a draft of the Supreme Court of the United States leaked on May 2.

Now, revoked Roe vs. Wadethe landmark decision of 1973 that guaranteed the constitutional right to abortion in the US, it is up to the states to legislate whether the termination of pregnancy is legal or not and under what circumstances.

Immediately after the ruling of the Supreme Court was known, Missouri and Texas he hasn been the firstyou conditions to restrict abortion.

It has done so through trigger laws, also known as activation or “trigger” laws, designed to take effect automatically or through swift state action once constitutional protection is removed.

The opinion “immediately restores Missouri’s deep-seated history and proud tradition of respecting, protecting and promoting the lives of the unborn.”

On Twitter, Schmitt noted that this makes Missouri the first state in the country “to effectively end abortion.” “This is a monumental day for the sanctity of life”he added.

“Today the issue of abortion returns to the states,” said Texas Republican Attorney General Ken Paxton. “And in Texas, that question has already been answered: Abortion is illegal here.”

Additionally, Paxton said he would close his office and make June 24 a annual holiday in memory of the nearly 70 million babies “killed in the womb”. “Our hearts and prayers go out to all of them,” she added. “Such a thing should never happen in America again.”

Several states are expected to follow in the footsteps of Missouri and Texas. And it is that others 11 they have a listas heeye triggers:

And in at least four other states they could revive the abortion bans prior to Roe vs. Wade or they would have new laws that have not been blocked by courts:

Added to this are the laws related to the end of pregnancy that the states have been discussing in recent years. In all, the Guttmacher Institute, a private nonprofit organization that supports abortion rights, anticipates that could be 26 states in which it would eventually end up restricting The procedure.

And in those where there is more than one law on the subject, it will be the local officials who will decide which prohibition to apply.

If all of these state regulations were to go into effect, they would limit abortion from:

States in which it was already prohibited

However, the existence of Roe vs. Wade nor did it guarantee that access to abortion would be respected throughout the country.

The legal precedent, which made it impossible for states to prohibit the procedure while the fetus was not viable outside the womb (what today is considered to occur around the 23rd week of pregnancy), was already challenged by Texas and Oklahoma with individual laws before being invalidated.

The first to enter into force was that of Texas, in September of last year.

Since then, the call “law of the heartbeat” It prohibits termination of pregnancy if the doctor can detect embryonic or fetal heart activity, which usually occurs after the sixth week, a point at which many women do not yet know they are pregnant.

It does not contemplate exceptions for cases of incest or rape, although it does for when the woman’s life is in danger, and persecutes those who practice abortion, not those who submit to it.

Inspired by that legislation, Oklahoma approved in May an even more restrictive, the most limiting in the country so far: It prohibits abortion from the moment of fertilization, except in cases where the life of the mother is threatened or the pregnancy is the result of rape or incest.

In the state laws the prohibition is not absolute and in most exceptions are contemplated, although they are limited to when the woman’s health or life is at risk, or to cases of rape or incest.

They are caveats that are currently codified in the Hyde Amendment—a piece of legislation passed in 1976 and in effect since 1980—as the only reasons the federal government will pay for abortions through Medicaid, the program through which people of less income receive health services.

They were already considered in 1959 by the American Law Institute, an independent group of jurists, when it began to draft model legislation on the crime of abortion.

And they have been supported for decades even by those who worked to get the Roe vs. wade, as well as the majority of Americans (including those in majority Republican states), as polls have shown year after year.

However, these state laws make no exceptions for victims of rape or incest:

The state senator who sponsored the Arkansas legislation, Jason Rapert, a Republican and president of the National Association of Christian Lawmakers, said it was his faith that drove him.

She explained that she had heard testimonies from rape and incest victims who expressed “the mental anguish they went through as they dealt with the fact that they ended the life of their own baby” and who now oppose abortion. “What Texas has done is absolutely unbelievable,” Rapert said in September, referring to the “law of the heartbeat.”

For its part, Mississippi law —which prohibits abortion beyond the 15th week and in favor of which the Supreme Court voted, thus de facto invalidating Roe vs. Wade— allows termination of pregnancy in cases of rape but does not specify incest.

And while all prohibitions allow an exception for save woman’s lifeonly that of these states cite protecting your health (“avoid severe physical harm to the mother”):

To make the caveat, states would require both doctors and patients to provide documentation to justify the procedure, including information such as the gestational age of the fetus, indication of cardiac activity and attesting medical records, as noted. Oklahoma law, “the medical condition” or condition of the pregnant woman that precludes compliance.

At the same time, there are states who have moved to strengthen existing protections or expand access to abortion this year.

According to the Guttmacher Institute, these four states have codified the right to abortion throughout pregnancy without state interference:

And 12 explicitly allow it as long as the fetus is not viable outside the uterus or the intervention is necessary to protect the life or health of the pregnant woman:

These would continue providing the procedure not only to women in their jurisdiction, but also to those from territories in where is prohibited.

Between 2012 and 2017, at least 276,000 women ended their pregnancies outside their home state, according to a 2019 analysis by the Associated Press based on data from state reports and the Centers for Disease Control and Prevention (CDC).

Likewise, representatives of organizations with clinics in Texas confirmed to BBC Mundo that since the “heartbeat law” came into force they have had to reject “hundreds, thousands of patients because they are not eligible”, while health centers offering pregnancy termination services in New Mexico, Kansas, Colorado, Missouri and Oklahoma have seen a significant increase in Texan patients.

According to data collected by Planned Parenthood, a US non-profit organization that offers reproductive health, sex education, family planning and abortion services in the US and around the world, between September 1 and September 31 December 2021, the increase was already 800% compared to the same period in 2020.

The Guttmacher Institute estimates that some 36 million women of reproductive age would live in states without access to abortion.

Average profile of those who abort

According to the Centers for Disease Control and Prevention (CDC), in 2019, 630,000 abortions were carried out in the US, although based on its own calculations, the Guttmacher Institute ensures that the true figure is closer to 860,000.

Regarding the average profile of the woman who sought to terminate the pregnancy, the CDC indicates that 92.8% did so during the first trimester.

According to the same source, most of those who aborted were not married, although they could be living with a partner at the time they underwent the procedure.

About one in 10 women who terminated pregnancy were teenagers, although most were in their 20s and 30s.

About 60% had given birth before, and nearly 60% had never had an abortion before.