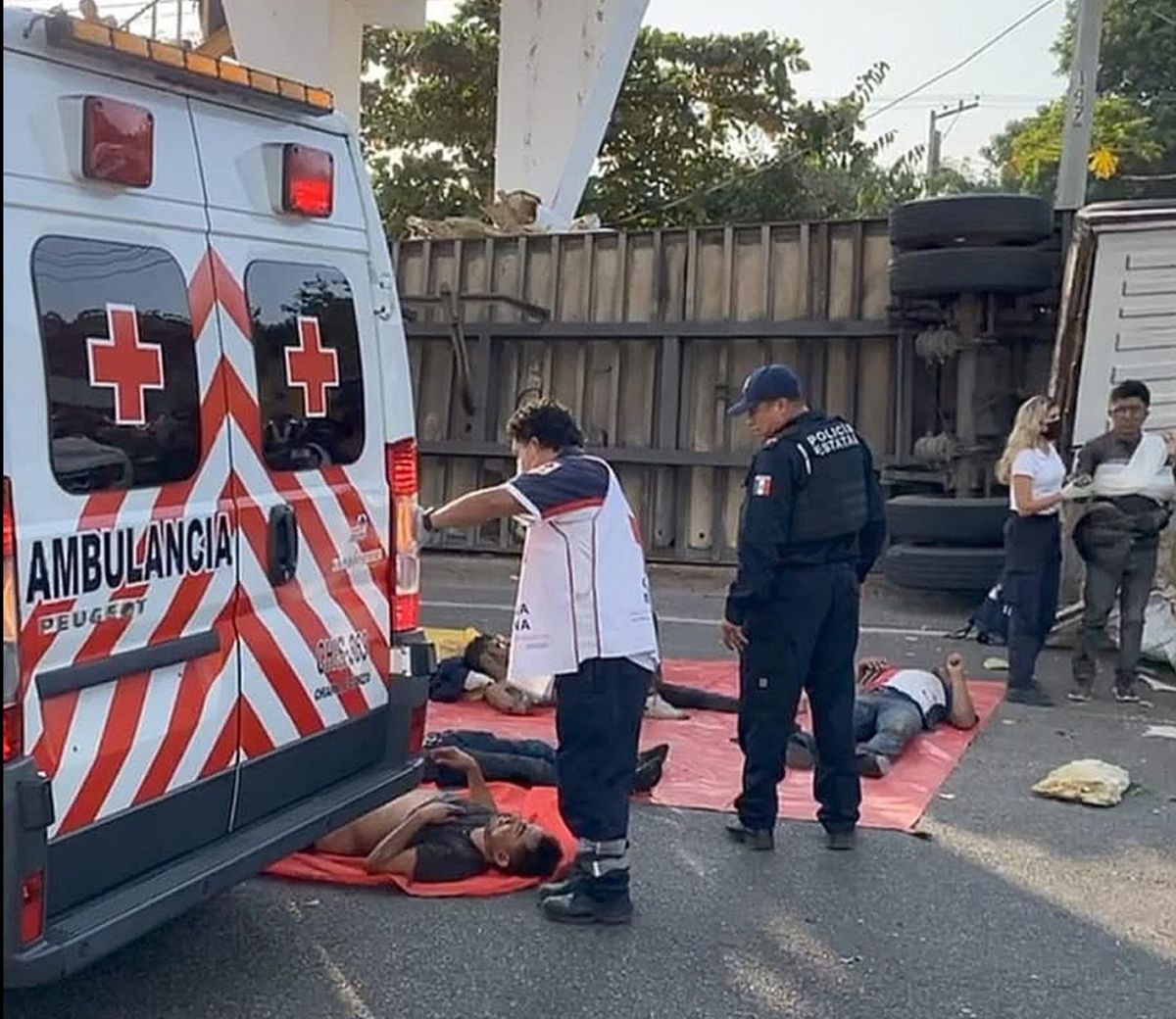 “Do not sleep! Don’t close your eyes! ”A migrant pleaded with one of his injured companions.

Both were part of the more than 160 migrants, mainly from Central America, who were traveling crammed into a truck that overturned Thursday afternoon in the state of Chiapas, in southeastern Mexico.

“Remember what you promised your mother, hold on!” That migrant implored his friend, Sabina López, a neighbor of the place where the incident occurred, told the AFP agency.

The incident left at least 55 dead and a hundred wounded, according to the report of the federal authorities presented this Friday.

Most were from GuatemalaForeign Minister Marcelo Ebrard reported, without specifying the number.

It is one of the greatest tragedies of this type to have occurred in Mexico and a reflection of the migratory crisis in Central America and the Caribbean that has worsened in recent months.

What is known of the victims?

The head of the National Guard, Luis Rodríguez Bucio, reported this Friday that around 160 migrants were traveling in the cargo vehicle, mainly from Guatemala, Honduras and El Salvador, seeking to reach the United States.

Around 3:30 p.m. local time (9:30 p.m. GMT), they were circulating between the cities of Chiapa de Corzo and Tuxtla Gutiérrez when, allegedly, excess speed and a brake failure led to the overturning of the vehicle.

The truck hit a pedestrian bridge and some of the migrants were projected through openings in the trailer bed.

A first list of victims published by the Chiapas government named Naymer Fuentes Bravo, a 30-year-old Guatemalan, as one of the deceased.

At the scene of the accident, 49 people died, while another six died in hospitals, according to this Friday’s report.

Of the injured, 95 are originally from Guatemala. Another three came from Dominican Republic, one of Ecuador, one of Honduras, one is Mexican and there was no confirmation of another four.

“It was horrible to hear the wailing”

Sabina López was one of the residents of the El Refugio neighborhood, in Tuxtla Gutiérrez, who rushed to help the victims after hearing a loud noise.

“It was horrible to hear the wailing. I just thought of helping, ”López, 18, told AFP.

There were dozens of people screaming in pain, many of them still trapped in the trailer that split in two upon impact.

Others lay unconscious and those who emerged unhurt they looked terrified and hugged.

López and other neighbors had to move those who had already died to the asphalt and put sheets over them.

“There were a lot of people lying around, some were already dead. We helped the paramedics in what we could with other boys to help those who still had vital signs, “said Isaías Díaz.

The head of the National Guard explained that the migrants entered Mexico in the La Mesilla area, on the border with Guatemala, and concentrated in the city of San Cristóbal de las Casas.

An hour and a half before the incident, they were put into the trailer that the traffickers made slots for easy ventilation.

“But this, when the tragic event occurred, could have affected their security. They could have been projected when the incident occurred, ”said Ricardo Mejía Berdeja, Undersecretary of Public Security.

The destination of the truck was the city of Puebla, about 700 km in the center of the country.

The transfer of dozens of migrants in trucks is a clandestine practice that has become increasingly frequent in Mexico by traffickers, who charge thousands of dollars to do so.

The president of Mexico, Andrés Manuel López Obrador, regretted what happened: “It hurts a lot when these cases occur. We have been insisting that the causes that originate these unfortunate events must be addressed ”.

In recent weeks, the Mexican National Migration Institute located and intercepted several trucks with hundreds of migrants on board in states near the southern and northern borders of the country.

Between January and October of this year, more than 228,000 migrants were detained by Mexican authorities, almost 64% more than in all of 2020. More than 82,000 people were deported in this same period.

In addition, asylum applications in Mexico they broke their all-time record this year. The Mexican Commission for Aid to Refugees received more than 123,000 petitions from January to November 2021, mainly from Haitian, Honduran and Cuban citizens.