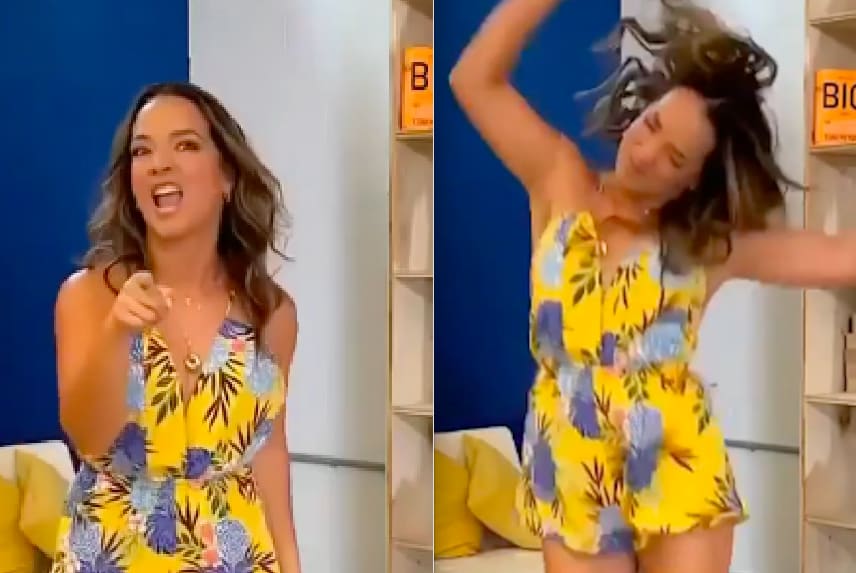 Get fed up with criticism! Adamari López surprises in social networks by sending a forceful message in response to all the criticisms, and affirms that she really “does not care about her negative comments”, however things did not turn out well for the Puerto Rican, since more mockery of her they ended up arriving.

Adamari López has always established herself as one of the favorites among the Hispanic public, and it is because of her sympathy or her way of being so pleasant that she establishes ties with all those people who know her. Unfortunately, just as there are people who love her, there are others who do not hesitate to point out everything she does.

Tired of criticism, Adamari López sends a strong message, but it goes wrong

And it is that since her separation with Toni Costa, the Puerto Rican has been receiving endless criticism and reproaches, and not only about her love relationship or her family, but also about her physical appearance, where many followers do not usually measure the degree of comments made to her.

After this wave of criticism and ridicule, the presenter of the morning program Hoy Día has decided to react to these comments for the first time, sending a forceful message through social networks, where she stated that “she really did not care much about these comments.”

“I do not mind”; Tired of criticism, Adamari López sends a strong message

Through the Instagram account of the program “Suelta la sopa” a video was published in which the Puerto Rican appeared dancing and moving her curves from one side to the other, while sending a strong message to all those people who have been judging lately.

In the video, which already has more than 162 thousand reproductions, the song “No me importa” is heard while Adamari López appeared dancing and singing it in front of the camera, making it understood that this message was addressed to all the people who they criticized, while showing off her slim body in a yellow jumper with floral details and white tennis shoes.

At the bottom of this publication, the account wrote the following message from Adamari López for the people who criticize it: “That! Adamari López responded to the rhythm of ‘I don’t care’. The Puerto Rican presenter danced and jumped to make fun of her haters, showing her amazing figure ”.

Unfortunately for Adamari things did not turn out as she expected, since followers of the account of “Suelta la sopa” did not hesitate to leave another comment and start making fun of the Puerto Rican, stating that he really did care since he was talking about it. and answering it.

Several followers went with everything against the beautiful telenovela actress after this forceful message: “He wants to hide that he does not care but he does care JAJAJ”, “Well if you care from the moment you are making this video hahaha”, “Yes He wouldn’t have cared if he hadn’t lost weight because of the hate people threw at him. She is fooling herself. How bad it is for him ”.

On the other hand, some followers pointed out that they did not believe that he was really dedicating that message to the “haters”, but rather to the alleged news that his ex Toni Costa already has a new partner: “¿¿¿¿¿¿¿¿For haters? ??? How strange because he came out with that just the day they unveiled the great body of Tony’s new girlfriend. “

“She is beautiful”; Tired of criticism, Adamari López sends a strong message

The good thing for the driver was that other followers took her side, since after sending this forceful message in which she stated that “she did not care about the criticism” she received, other users highlighted that every day they saw her happier, in addition to affirming that he was glad that she was already well:

“That is the attitude, with a Puerto Rican I do not fuck $%”, “The people who criticize this lack of a life of their own and only live on other people’s lives, she is beautiful”, “How beautiful she is, what a change, you can see beautiful ”,“ She looks beautiful definitely, it burns whoever burns it ”,“ That’s the way it should be, you no longer care that Toni has a girlfriend, your heart healed ”,“ That Ada, you don’t give a damn what they say and a lot less what they do ”, were one of the other comments he received. Filed Under: Adamari López message. VIDEO HERE

Both still look spectacular. The Puerto Rican driver, Adamari López appears next to the Mexican Miss Universe, Andrea Meza and followers go with everything to the beautiful driver, stating that the model looked much better than she and that the outfit did not favor her at all. the also actress.

Currently Adamari López has been positioning herself in the public eye since she ended her relationship with the Spanish dancer Toni Costa, father of her daughter Alaia, after this, the pretty short girl has been impacting everyone with her spectacular physical change, looking more slim and happy than ever, something that can be observed through cameras.

However, it seems that the bad comments have not completely disappeared, since on one occasion in which Adamari López appeared next to the Mexican model and winner of the Miss Universe 2021 contest, Andrea Meza, the users in networks Socials went with everything against this beautiful driver, who did not hesitate to leave several comments about it.

It was through the Estrellas Tv Facebook account, where the page published a photograph four days ago, where the 27-year-old model, Andrea Meza, appeared just when she was a guest on the Telemundo program, Hoy Day, looking like a beauty queen.

Adamari López appears with the Mexican Miss Universe and is she humiliated?

Beside her was Adamari López, wearing a completely red outfit, at the bottom she wore a top, along with high-waisted red satin shorts, while her hair fell. And it is that despite the fact that both looked beautiful, the difference in height is quite considered, since the model measures 1.80 meters, while the Puerto Rican measured less than 1.60 meters.

This difference in height became the center of attention of thousands of followers, where they highlighted how tall the model from Chihuahua looked compared to the host of the morning Hoy Día.

Among the comments that could be read in the photograph of Adamari López next to Miss Universe, there were several criticisms of both, stating that both were very thin, when at first they criticized the Puerto Rican for being “overweight” : “Adamari that she no longer passes, she looks good, but she is already losing a lot, then they look like corpses”, to which another user replies: “We prefer to be skinny than fat, she is very well, before they criticized her because she was fat and now that she’s gone down, no, not even how to understand them ”.

On the other hand, some followers not only criticized Admari López but also the 27-year-old model: “The Miss with the skinniest legs I’ve ever seen, and that’s on television, I imagine she’s worse in person. Adamari does have beautiful legs ”.

“They both look spectacular”

Fortunately, there were other comments that came out in defense of Adamari López and the Miss Universe, stating that both looked spectacular together: “Two beautiful Latin women, with different body types and stature, long live diversity, many would already like to be 50 and look like 30 years ”.

“They are both beautiful, each one of their kind, Adamari congratulations, I need your willpower, very admirable, you look 30 and you wear that style very well with those good abs”, “But if they both look beautiful, the short girl although have abundance, that does not matter, the most beautiful thing that looks good and with a lot of energy, God bless her “,” Those two women are the example for all those women who feel bad because they are short or tall, they are also beautiful, intelligent ”.