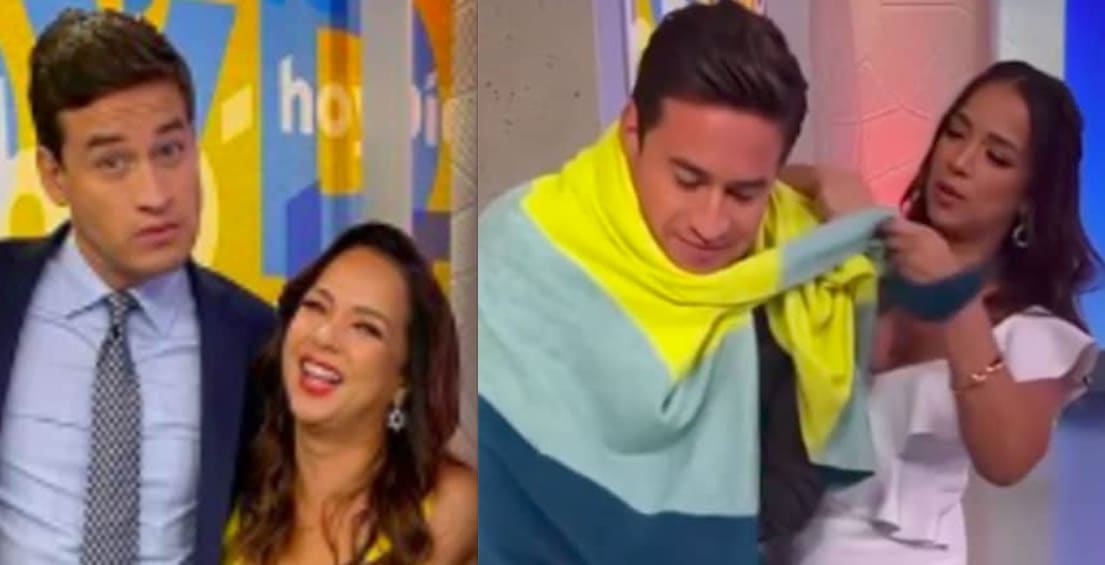 Two of the most beloved and charismatic hosts of Hispanic television are undoubtedly Adamari López and Nacho Lozano, who in ‘Hoy Día’ show their energy and professionalism, but lately, they appear more and more tender and affectionate between the two , so people speculate a possible romance.

Although it is only a few months after the announcement of the separation of Adamari López from her ex-partner Toni Costa, the truth is that the rumors that the host of ‘Hoy Día’ is already ready to find a new beau do not stop and now in some photographs and Recent videos, could it be that it shows your attraction to Nacho Lozano?

Now in a recent video published by an Adamari López fan page on Instagram called ‘Adamary López Torres’, it can be seen in the images as tenderly and saying ‘My love’, the Puerto Rican consents to her partner Nacho Lozano because he is cold.

In one of the commercial breaks, apparently Chiquibaby, Adamari López and Nacho Lozano have to find a place on the set of ‘Hoy Día’ where they do not feel so cold, because while the Mexican is freezing to death and makes exaggerated gestures to attract attention of the Puerto Rican, Toni Costa’s ex covers herself with a kind of poncho.

Although the new stage of ‘Hoy Día’ started just this 2021, the truth is that the drivers have made a very good dumbbell and the chemistry between them is palpable, so much so that people are excited that a romance between Adamari López and Nacho Lozano.

After Adamari López realizes that Nacho Lozano is cold, he takes off his poncho to put it on but as he does so he calls him ‘my love’: “Have my love … take care of yourself my love, take care of yourself”, while the Mexican allows himself to be pampered very tenderly for the Puerto Rican who wears a dress that also caused commotion.

The comments for the images were immediate: “I find him handsome and if he treats her like a queen, what would be the impediment? She has the right to rebuild her life. ” Chiquibombi as a pimp ”.

“How quickly oblivion comes, God knows what she’s doing”, “If JLo can, why can’t she?”, “She has every right to rebuild her life with whoever she wants”, “But now all the men who talk and stay by Adamari’s side. Are they her husbands? Wow, that is having a dirty mind and playing with the other’s reputation! “

‘The suspicious belly’ of the host of ‘Hoy Día’

But speculations about the alleged couple were not the only ones, because the tight white dress that Adamari López was wearing, also brought her comments assuring that she was pregnant because of the belly that could be seen: “But days ago I was almost flat, and that stomach What does Ada have? “,” And what is Adamari’s belly that is ??? “,” What happened here ??? Where did that belly come from ”,“ It has a pronounced belly ”.

And they continued: “How many pregnancies are there?”, “I think Alaia is going to have a baby brother”, “Is Ada pregnant or what?” , “Jummmm I think there is a baby on board”, “I think the same thing had not returned with her husband and they were on vacation, what a shame I thought she was even pregnant, she looks like a belly. But be happy. “

Do the drivers of ‘Hoy Día’ make a great couple?

After working for years in Mexico, Nacho Lozano joined the ranks of Telemundo with the new stage of ‘Hoy Día’ and the charismatic host has shown signs of intelligence and ‘drag’ with the female audience, as many women consider him attractive And now, a photograph with Adamari López sparked romance speculation.

Although Nacho Lozano is very discreet with his private life, it is unknown if he is married, has children or, is single and if he has a partner, but now, a photograph with his partner of Hoy Día, Adamari López, unleashed a wave of comments from that fans would love for both of them to have an affair.

The Puerto Rican is affectionate with her partner

Adamari López just announced her separation from Toni Costa two months ago and is already working on her image to look better and better in the body and to get new love? It could be that the 50-year-old Puerto Rican, who likes them younger, came to have a ‘fixation’ for her partner Nacho Lozano.

A photograph on the morning’s Instagram, unleashed a lot of emotion among the followers of the show because although they always appear together with the Chiquibaby and guests of ‘Hoy Día’, on this occasion, a very tender image caused rumors of romance between Adamari López and Nacho Lozano .

In the snapshot shared on the Instagram account of ‘Hoy Día’ you can see Adamari López very happy and smiling while Nacho Lozano happily hugs her from the back and rests her head on the shoulder of the Puerto Rican who wears a pink Mexican dress with hello on the shoulders.

For his part, Nacho Lozano appears with a very elegant suit and also very smiling for the photo, which unleashed a wave of speculation among the followers who unexpectedly excited assured that they would like there to be a ‘romance’ between the two. HERE YOU CAN SEE THE VIDEO OF NACHO LOZANO AND ADAMARI LÓPEZ VERY ROMANTIC

Adamari López deserves to have a new heartthrob

Most unexpectedly, the comments of supposed ‘romance’ between Nacho Lozano and Adamari López appeared: “Nice couple”, “Now nobody can hug because they are a COUPLE”, “I love the couple they make”, “Mmm .. it smells like me something there hahaha? Haha well ”,“ He already found a substitute ”.

To this last comment, people responded if Nacho Lozano was already ‘the substitute’ of Toni Costa by Adamari López: “Since when are they saying that it is him”, “Toni looks much better”, “And not only that, how has it helped her, which is the most annoying thing “,” have you been present in that relationship, have you lived with them, do you know what happens behind closed doors, do you know? “.

The two have very good chemistry in ‘Hoy Día’

Other people decided to comment directly and ask in the ‘suspicious photo’: “Are they a couple?”, “It seems, right? This hug is seen as a couple and not as a friend. I have always said, “Do not do good things that seem bad” “,” And if they are a couple, what is wrong? “,” My God, she is fast, “said several people.

Another comment was more understanding with Adamari López: “I love both of them, and the fact that they embrace does not mean that they are a couple, because people do not learn that friendship between a man and a woman cannot be? He is very professional and very affectionate, he sees all those in the program, badly thought out, and if there is something with Ada, well she has, she will already be free and what does it matter… .. ”, they assured.

Would Nacho Lozano be the ideal partner for the host of ‘Hoy Día’?

Do you presume to Toni Costa what you let go? Adamari López is in her best single moment and happier than ever with her ‘new body’ and her rejuvenated image, but now, she raises suspicions if she seeks a reconciliation with her ex who is currently traveling with her daughter Alaïa. ?

Through some photographs and videos where Adamari López tells that she is fixing her hair to go on a trip to spend a well-deserved vacation, it began to speculate that the Puerto Rican host of ‘Hoy Día’ would go to Spain to catch up with her ex Toni Costa and her little Añaïa and being together.