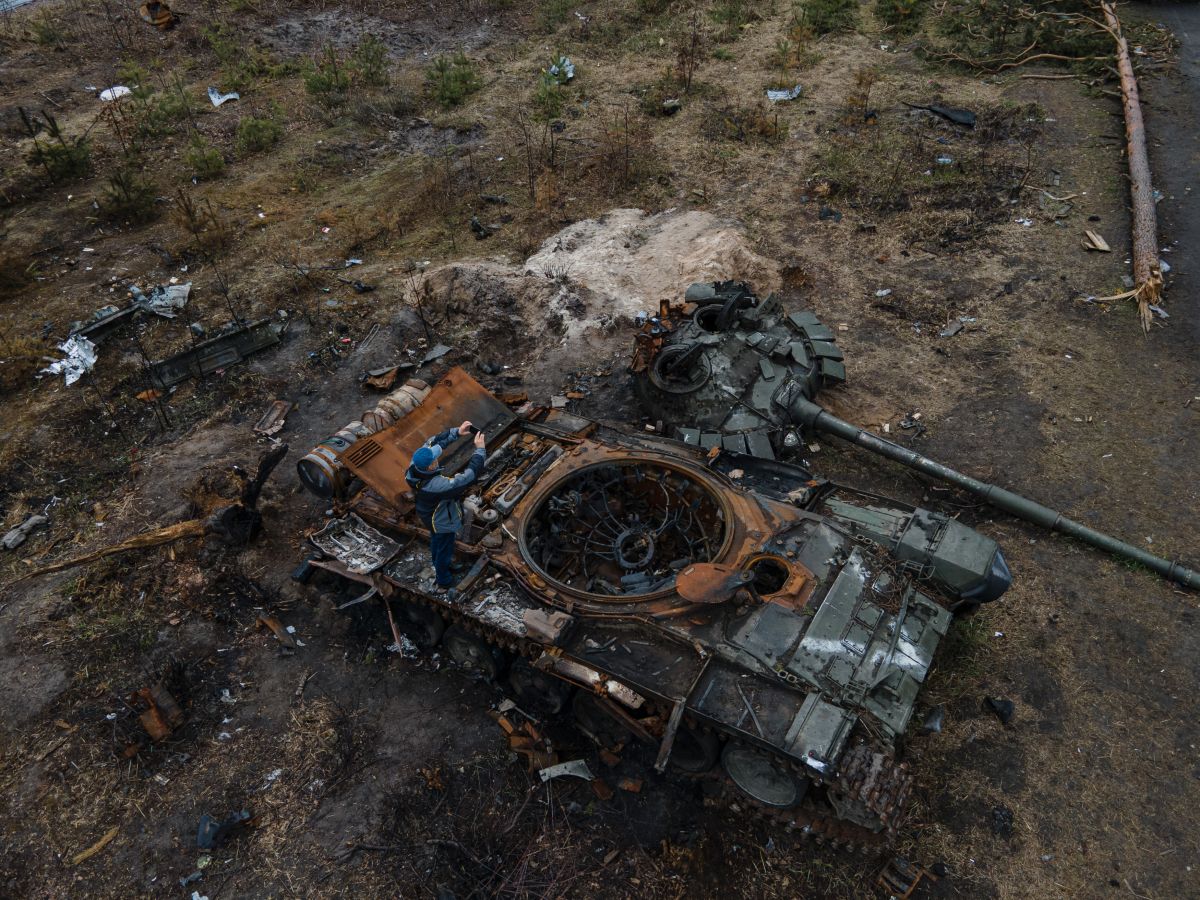 dramatic satellite images show a “cemetery” of Russian Z tanks with 52 vehicles that were blown up by Ukrainian troops in a single battle.

The unprepared Russian battalion, was shelled and shattered while trying to cross the Donets River in Ukraine, in yet another humiliating setback for Vladimir Putin’s forces.

Ukraine claims it inflicted more than 1,000 military casualties on Russia; if true, this would be the worst day for Moscow since the war began.

Russian forces were forced to withdraw from the outskirts of the eastern city of Kharkov.

Ukrainian President Volodymyr Zelensky said the counteroffensive had “liberated” the country’s second-largest city and surrounding villages and gave his troops a clear line to attack occupation forces in the strategic city of Izyum.

“The occupants are gradually being pushed away,” Zelensky said as he praised the effort of his “superhuman” forces.

“I am grateful to all of our defenders who hold the line and demonstrate truly superhuman strength to drive off the army of invaders.”

New satellite images reveal the true scale of destruction from Russia’s failed assault along the river near Bilohorivka, west of Lysychansk.

It seems that the Russian commanders tried to surround the cities of Lysychansk and Severodonetsk by crossing the body of water, but the Ukrainian troops foiled their surprise attack and correctly guessed their plans.

Maxim, a Twitter user who claims to be a Ukrainian military engineer, said he pinpointed the exact spot where Russia was most likely to cross on May 7 and told his commanders, who ordered troops to listen for sounds of Tugboat engines pushing a pontoon bridge.

On May 8, Russian troops blanketed the river, burning nearby fields and throwing smoke grenades, the military engineer said.

Their commanders detected the sound of the ships’ engines and used drones to locate the battalion before ordering a devastating artillery strike.

“About 20 minutes after the reconnaissance unit confirmed that the Russian bridge was being erected, the heavy artillery engaged the Russian forces, and then the aviation also intervened,” Maxim said.

“I was still in the area, and I had never seen or heard of such a tough fight in my life.

“After a day of fighting, on the morning of May 9, the bridge was down.

“Some Russian forces, approximately 30-50 vehicles and infantry, were trapped on the Ukrainian side of the river with no chance of return.

“The aviation began a heavy bombardment of the area and destroyed all the Russian remains there, and the other bridge they tried to make.

“Rumors say that there are 1,500 dead Russians. Their strategic objective was to cross the river and then surround Lysychansk. They failed miserably.”

According to Forbes, the attack killed more than 50 vehicles and up to 1,000 Russian soldiers.

The Donets River is just one of several water barriers that the Russians must cross in order to advance west into Ukrainian-held territory and complete their goal of capturing Donbas.

Images of the bloody battle show the coastline littered with bombed-out T-72 and T-80 tanks and armored vehicles.

The boost means Ukrainian artillery can now reach the important city of Vovchansk, which contains a vital road and rail line supplying Russian forces in Donbas.

The UK Ministry of Defense said Russian troops deployed around Kharkiv were “vulnerable to the mobile and highly motivated Ukrainian counter-attack force”.

“Despite Russia’s success in encircling Kharkov in the early stages of the conflict, it has reportedly withdrawn units from the region to reorganize and replenish its forces after heavy losses,” the ministry said in an update Thursday morning. .

“Once reconstituted, these forces will likely deploy to the eastern bank of the Donets River, forming a blocking force to protect the western flank of Russia’s main concentration of forces and the main supply routes for operations in the vicinity of Izyum. . “The withdrawal of Russian forces from Kharkov is a tactical acknowledgment of Russia’s inability to capture key cities in Ukraine where they expected limited resistance from the population.”