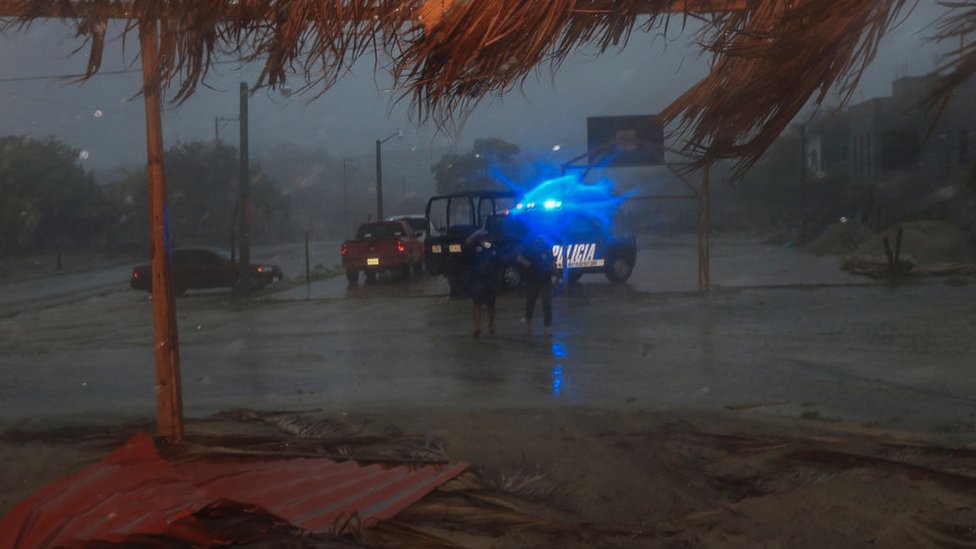 Agatha, the first hurricane of the season in the Pacific, made landfall on Monday in southern Mexico, where strong winds and heavy rains were reported.

Mexican authorities worked all Monday night and into early Tuesday to clear roads blocked by landslides along the country’s southern coast.

Heavy rains produced mudslides and rocks on two highways in Oaxaca state, blocking access to at least one region of that state.

As reported by the US National Hurricane Center (NHC), the eye of the storm – the area of ​​lower pressure around which the strongest winds are found – entered Mexican soil at a point near Puerto Ángel, in the state of Oaxaca.

Agatha made landfall as a category II hurricane on the Saffir-Simpson scale, with maximum sustained winds of 165 km/h, making it a the most intense to arrive in Mexico in the month of May since records are kept.

Previously, only three hurricanes had made landfall in Mexico in May.

Later, as it moved inland, Agatha lost strength, registering sustained winds of around 130 kilometers per hour and was later downgraded to a tropical storm.

NHC forecasts predict that it will continue to rapidly weaken and end Monday night as a tropical storm before dissipating throughout Tuesday.

Some towns in the southern state of Oaxaca were left without electricity and a transformer exploded, according to the Reuters agency. Telephone lines were also cut and authorities had to communicate by radio.

Local press reports indicate that heavy rains and winds have been recorded since the weekend in Oaxaca, where important spas and tourist areas of Mexico are located.

In Mexico, Civil Protection authorities in Oaxaca said they had evicted some families from the San Pedro Pochutla municipality and indicated that at least two highways had been affected by landslides, Reuters reported.

The heavy rainfall also affected several areas of Guatemala and El Salvador, where the authorities issued alerts and warned of possible landslides.

The NHC warned that Agatha is expected to generate heavy rain through Tuesday night. one is anticipated precipitation between 25 and 41 centimeters.

In the state of Chiapas there is also a risk of flooding and landslides, as well as in Veracruz, Tabasco and eastern Guerrero, according to the NHC.

Agatha formed off the Mexican coast and became a tropical storm on Saturday.

The start of the eastern Pacific hurricane season began on May 15 and runs through November 30.

Wednesday begins the Atlantic hurricane season, during which meteorologists predict above-average activity, with the formation of between 6 and 10 hurricanes, of which between three and six will be of great intensity.