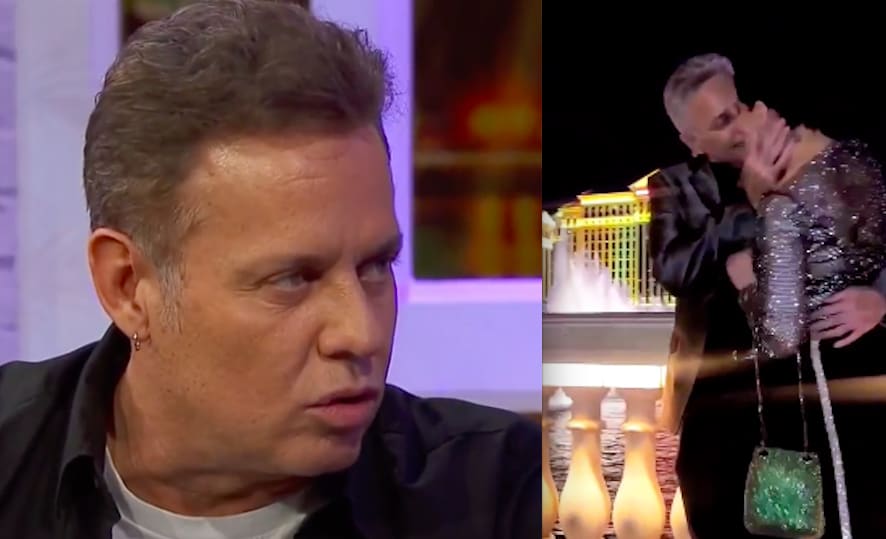 “He hangs out with young girls since his relationship ended.” Just when it is assured that the actor Alexis Ayala does not give “even for rent” to his ex-partner, Fernanda López, with whom he has a daughter, the Mexican presumes a new girlfriend on social networks, and followers throw him in the face of the soap opera villain that “you are only looking for young girls” and that you better “should give your ex money to support your daughter.”

It seems that love is knocking again at the door of the Mexican actor, Alexis Ayala and it is that after he announced his separation with Fernanda López at the beginning of last February, Cupid smiled at him again, since it was this Tuesday he announced his new relationship with another beautiful actress.

It was through the Instagram account of the actress Cinthia Aparicio, who announced that she was dating the 56-year-old actor, Alexis Ayala, something that, in the words of the actress, was an extremely beautiful love and that said incidentally, he was praised by many on his social networks.

In the short video, which already has more than 2,000 likes, it is possible to see the happy couple giving a passionate kiss while in the background Caesar Palace, a popular casino in Las Vegas, Nevada, is observed, while the classic fountain that adorns in various effidices begins to create the perfect environment for a very romantic scene.

In love with her: Alexis Ayala has a new girlfriend

On the other hand, the actor of Mexican soap operas, such as “The shadow of the past”, “What life stole from me”, “Against the wind and tide” and various other productions, did his thing, since through his account Instagram also published a photo where he appeared with his new girlfriend, actress Cinthia Aparicio.

In the photograph, which already has more than 16 thousand likes, it is possible to observe Alexis Ayala enjoying a prestigious club in Las Vegas, while in front of him it is possible to see the young actress with a fitted red dress of her back to the camera, while he watches her with a big smile and writes at the bottom of the photograph: “Beauty”.

Don’t you give your ex money to support your daughter? Alexis Ayala boasts a new girlfriend on social networks

Despite the fact that both Alexis Ayala and his new girlfriend, Cinthia Aparicio, received endless positive comments on their respective Instagram accounts, where they were happy for this new stage for the actors, that does not mean that “ everything is going great for this actor ”.

Since days before this news was released, the TV Notes portal stated that a person close to his ex-partner Fernanda López, commented that the also theater actor did not give support to the actress to take care of her daughter, stating that she has struggled a lot to take care of her and ask Alexis for money.

He has dated only young girls; Alexis Ayala boasts a new girlfriend

According to the Mexican magazine TV Notes, it is stated that a person close to Alexis Ayala’s partner commented that the actor did not give him anything to take care of his daughter, and that, despite the fact that both he and Fernanda López had finished in “good terms” things are not the same as before.

During the interview with this alleged source, the magazine asked him how these actors were after their celebration, to which the close person replied that Alexis was undoubtedly as if nothing had happened: with a 20-year-old girl, because as a result of their separation he has dated several young women ”. VIDEO HERE

After these statements, the source that affirms that Alexis Ayala is dating only young girls, confessed that things between the actor and his ex-partner were not going well at all: “When they decided to separate, everything was carried out in peace and common agreement, but after several months the problems started and I think they are more than I imagined ”.

“It’s that when they decided to end their relationship, she left the house they shared, because it was owned by Alexis, and they decided that she and her daughter would move to a smaller apartment, supposedly everything they did was the most convenient for all three, but then the problems started ”.

Given this, the source stated for the magazine of TV Notes that supposedly Alexis was not going to give Fernanda López a peso for the care of her daughter: “Well, now that the children have returned to school and the expenses have increased, Fernanda He called Alexis to ask for help with books, uniforms and the supermarket, but he got upset and told him that he was not going to give him a peso because everything had been stipulated in the agreement that they both signed.

The source comments that the agreement stipulated that he would give him 12 thousand pesos of pension per month, but that the extra expenses would be given separately: “Obviously, this is where you really start to know who you divorced,” he said for the Mexican magazine, TV Notes.

I wouldn’t give it one more peso

“Imagine, just from what I more or less know, is that where Fer lives is an income of about 18 thousand pesos, tuition, I stayed in that he pays 8 mi”, after this he mentioned that also Fernanda’s daughter López and Alexis Ayala have a healthy diet just like their mother’s and that added extra money.

Despite saying that “he had no money”, Alexis Ayala went with his new girlfriend on vacation

The problems began to grow even more when Fernanda López found out that Alexis Ayala had gone on vacation with his new girlfriend after he told her that “he no longer had any more money to give her”: “She is very upset when she called him To ask him about school, he told her that he had no money, but later he found out that he had gone on a trip with the girl he was dating ”.

“It is an unconscious”

TV Notes asked the new source who Alexis Ayala’s supposed new girlfriend was, who he referred to as being around 20 years old: He went to San Miguel de Allende for the weekend ”, he commented.

The source close to the relationship comments that the actor Alexis Ayala was a rather unconscious father rather than disobedient: “Well, I would use the term” unconscious “because Alexis does pay the monthly payment, but he does not want to give a single peso more and that to know that Right now, Fer is dedicated 100% to her daughter ”.

On the other hand, the Instagram account of “The mitote was armed” released the news of Alexis Ayala’s new girlfriend, who, according to the source close to the actor, was in her early 20s, something that Of course, it did not go unnoticed by anyone, arguing that every day men were looking for more young women:

A follower, openly argued the following, also blaming Alexis’s ex for his alleged betrayal: “The gentlemen insist on having young girls, what a shame, in the end they only walk with them to take advantage of them after they deceive them with their instructors, Right Fernanda López? ”. Some images of this note come from the following video