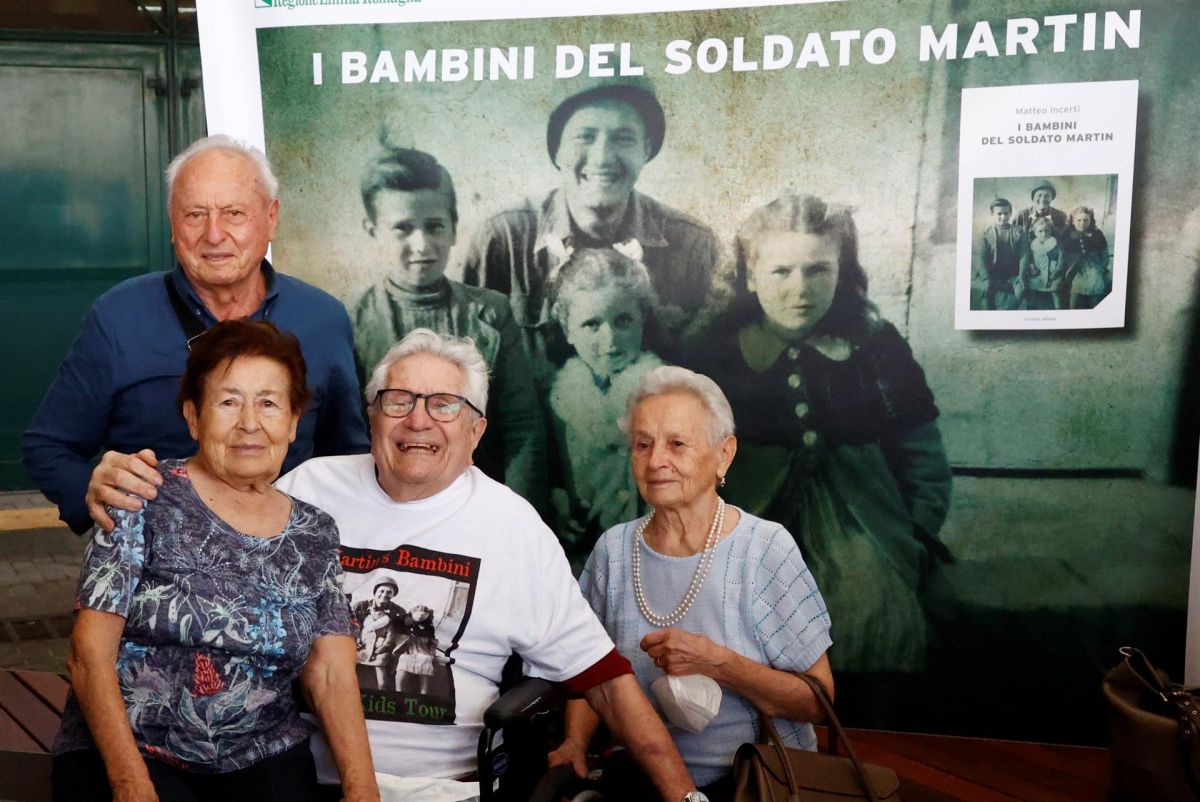 Private Martin Adler kept the photo in black and white for most of his life, not knowing the names of the children who posed next to him, nor what had become of them after the end of the World War II.

Old Adler had only one certainty that accompanied him all this time: for a second he had not riddled them with bullets. More than 70 years later, the four protagonists were able to meet again in Italy.

In the historic image, Martin is dressed in his American soldier uniform and poses with three Italian children he had just rescued when the Nazis withdrew to northern Italy in October 1944.

Italy had been invaded by the Third Reich and its troops carried out massacres such as that of Marzabotto, south of Bologna, when the Waffen-SS attacked the civilian population in retaliation for the activities of the partisan resistance.

In that context, Bruno, Mafalda and Giuliana Naldi, three children between 3 and 6 years old, They were hidden in a huge wicker basket by their mother. She wanted to avoid that, in the face of a safe irruption of German soldiers in her house, the children could be discovered.

But in the town of Monterenzio, a municipality in Emilia-Romana, the Nazis had already withdrawn and now those who were breaking into house to house looking for enemies were the American soldiers.

Martin was one of them, and when he entered the house and saw that something strange was happening inside the huge wicker basket, he was about to machine-gun it, thinking that a German soldier was hiding behind.

When he put his finger on the trigger and pointed at the basket, the mother came out desperate and stood right in front of her gun to prevent it from firing. “She put her stomach against my rifle yelling, ‘Bambini! Bambini! Bambini! ‘ hitting my chest, ”Adler recalled.

“The real hero was the mother, not me. You can imagine yourself standing in front of a gun and yelling ‘Boys! I do not add.

For the first time since the end of the war, This 97-year-old veteran was reunited with the three brothers. Bruno, Mafalda and Giuliana Naldi, who are now in their 80s, they shook hands with Martin at the Bologna airport, after a day’s journey from Boca Raton, Florida, the AP agency reported.

“Look at my smile”, said Adler about the meeting, which was made possible thanks to the reach of social networks and the Italian writer Matteo Incerti, who tracked down the protagonists of the photo and told the story in the book “Il bambini del soldato Martin Adler ”.

Adler still trembles when he remembers that he was only seconds away from opening fire on the basket where the children were hiding. After 7 decades, he still suffers from nightmares about the war, said his daughter, Rachelle Donley.

The children were very young and have almost no recollection of the episode. Giuliana Naldi, the youngest, is the only one of the 3 siblings who has a vague image of the event. She always says that when she came out of the basket, Adler and another American soldier were laughing with happiness. “They were happy they didn’t shoot,” recalls Naldi, now 80.

She did not understand the situation. “We were not afraid of anything,” he said. He also remembers the soldier’s chocolate, which came in a blue and white wrapper. “We ate a lot of that chocolate,” he laughed.

The daughter of the American soldier decided to use social networks to try to locate the children in the old photo in black and white, starting with the veteran groups. The image reached the Italian journalist Matteo Incerti, an expert on World War II, who traced the steps of the Adler regiment and where it had been stationed from a small detail in another photograph.

The same photo was later published in a local newspaper and then the identities of the three children, who were then grandparents, could be discovered.

“I am so happy and so proud of him. Because things could have been so different in just one second, ”Donley said. “Knowing that Martin could have shot and that none of my family would exist is a very big thing,” said Giuliana Naldi’s granddaughter, Roberta Fontana. “It is very emotional.”

During his stay in Italy, Adler will spend time in the town where he was stationed, before traveling to Florence, Naples and Rome, where he hopes to meet Pope Francis. “My dad really wants to meet the Pope,” Donley said. “He wants to share his message of peace and love. My dad likes peace ”.

They say that before arriving at the Vatican, Adler wants to visit the town of Monterenzio and, like 76 years ago, give chocolates to children.

End of World War II: the Japanese soldier who took 29 years to surrender