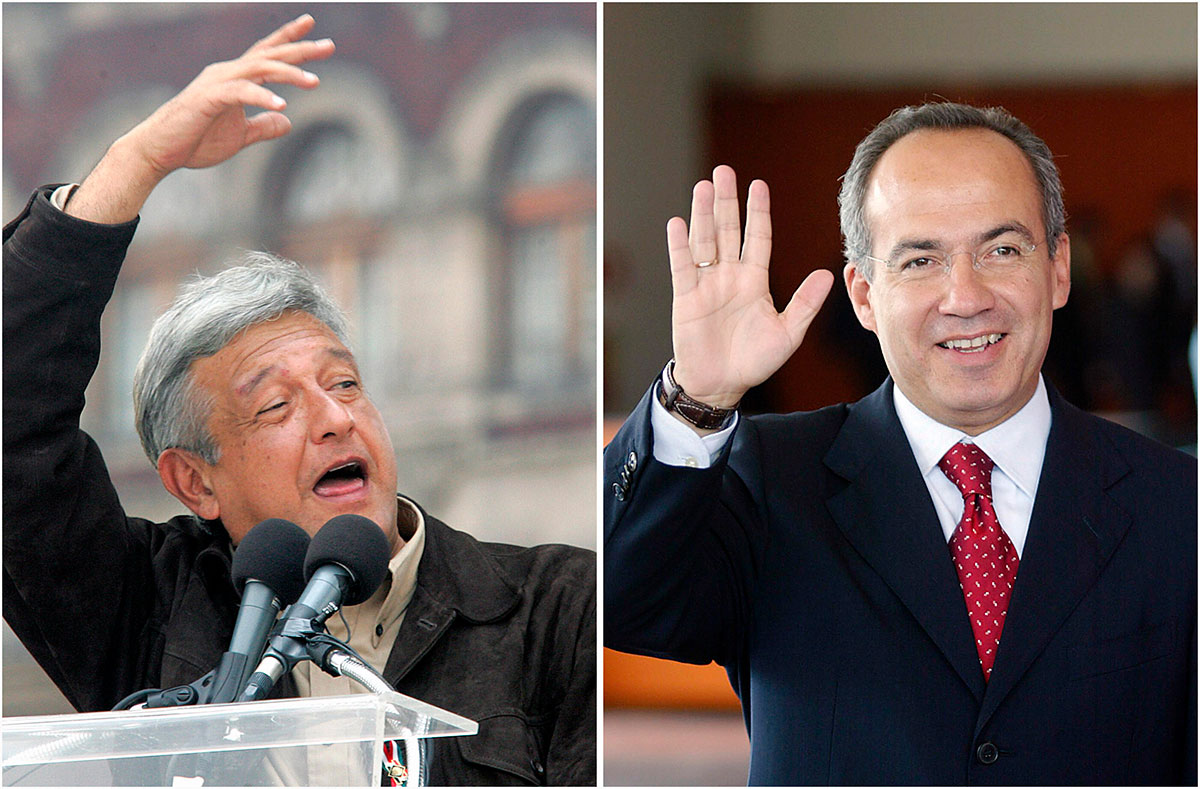 From Nayarit, the President of Mexico, Andrés Manuel López Obrador, denied the allegations of former President Felipe Calderón and opponents of his government, who pointed out on social media that the Mexican president traveled in a “simulated” train car, during the past weekend, in a supervision visit to the works of the New Felipe Ángeles Airport, in the State of Mexico.

“He (Felipe Calderón) believes that we are stuck in the montage age … I no longer understand the other but it is a shame and so, hopefully he takes care of his prestige. It can be said that he does not have, but we must not be unfair or lapidary. They must take care of themselves and above all, as a former president that represented Mexico in his time … Journalists do the same, they have a social function that deserves a code of ethics, journalism and politics is an ethical imperative…” he commented.

The Tabasco president said that these remarks by former President Felipe Calderón are part of an “anger” of their opponents who even fall into the “ridiculous”.

“They are very confused, very nervous, is what we have been proposing, is that the regime changed and it is not a change of government, it is a change of regime, that is why it is the fourth transformation, they thought it would be more of the same … the people and the benefits are for the people, they are upset, they do not understand, ” he said in his morning conference.

“In their anger they even fall into ridicule, López-Dóriga (journalist) is nothing more, not even Felipe Calderón (former president), it is a thought of many, of millions, fortunately the majority of people are awakening, but there are still many conservative dogmatists who do not want to see the reality and they fall into ridicule,” he said.

It was last Sunday, December 5, that the Mexican president published a video on his social networks where he is observed traveling inside a train car with his wife, Dr. Beatriz Gutiérrez Müller, as well as the Head of Government of Mexico City, Claudia Sheinbaum, and the Governor of the State of Mexico, Alfredo del Mazo, together with several members of his cabinet.

“The Mexico-Pachuca highway is extended to 8 lanes. Other roads are being built and the road from Lechería to the Felipe Ángeles airport, to get by train from the center of the city, Buenavista station, to the new airport in 45 minutes ”, the Mexican president wrote in his tweet last Sunday, December 5 .

For her part, the president’s wife, Beatriz Gutiérrez Müller, published on her social networks several videos in real time of the train they have traveled in.

Nevertheless, the video of the Mexican president caused the journalist Joaquín López-Dóriga to point out on his Twitter account that President López Obrador had been traveling in “a simulator.”

“They loaded @lopezobrador_ in a simulator. And show it as real. So # 4-T. And all happy. The wagon doesn’t even move, ”said López Doriga.

The journalist’s tweet was re-tweeted by former President Felipe Calderón, who assured that this video was “a good example of Fake News” and asked that “the lady who cannot read”, referring to Elizabeth García Vilchis, in charge of the Wednesday section “Quién es Quién en las Mentiras de la Semana” (“Who’s Who in the Lies of the Week”), point out this moment within her section in the morning conference.

“A good example of “Fake News”: traveling on a train that does not exist, based on manipulating the images with pre-recorded videos. Let the young lady who can’t read in her section of lies of the week take them out. And do not come out with that “it is not false but it is exaggerated,” said the former Mexican president.

This Wednesday, December 8, In the section “Who’s Who in the Lies of the Week”, Elizabeth García Vilchis showed the tweet of the Mexican journalist and former president Felipe Calderón.

“Sir, I wish granted, but for lying. He refers to me, and is very aware of my section, we congratulate him, “said García Vilchis in response to former President Felipe Calderón from the morning conference in Nayarit.

After reading the Twitter message from former President Felipe Calderón, the Tabasco president came out in defense of Elizabeth García Vilchis by pointing out that the lady” will not know how to read” but “is not a liar.”

“Well, the lady in the section will not know how to read, but the lady does not tell lies, she is not a liar,” said the Mexican president.