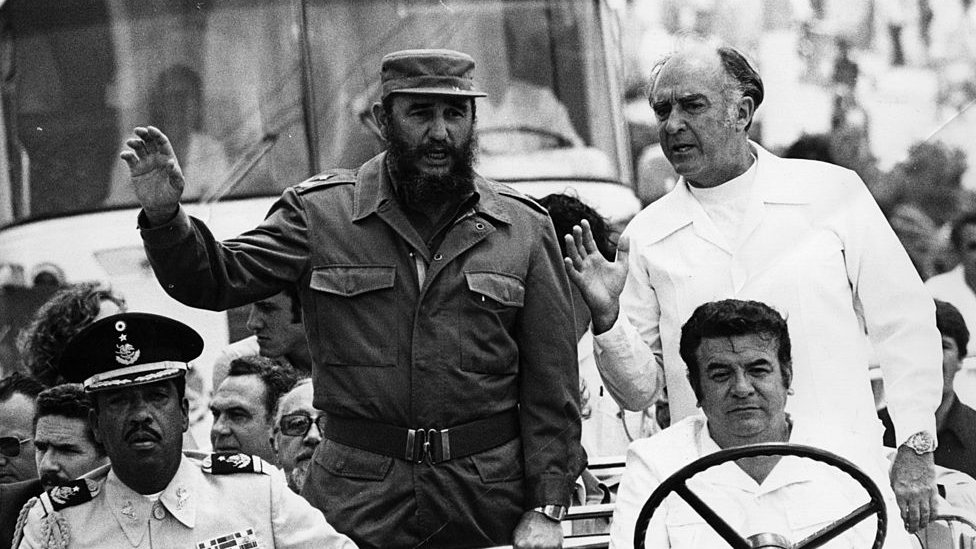 Regardless of whether they are left, center or right, the presidents of Mexico have shaken hands with the leaders of Cuba.

The historic relationship between the two countries experienced a great boost since the mid-20th century, with a cultural exchange that led the peoples of both countries to cultivate a special relationship.

And in politics, the Mexican leaders visited and received Fidel Castro regardless of whether they had much or little ideological affinity with the government of the Cuban Revolution.

The exception was in the early 2000s, when Mexican President Vicente Fox brought relations almost to a halt.

Andrés Manuel López Obrador arrives in Cuba this Saturday on an official visit to Havana.

A trip that, according to Mexican analyst Juan Pablo Prado Lallande, responds to a pragmatic tradition of Mexican leaders: “Cuba is an ace up the sleeve of the Mexican president who is in office.”

Prado Lallande has a doctorate in international relations from the Complutense University of Madrid and the University of Sussex, vice president of the Mexican Association of International Studies and has been a consultant for the United Nations Development Program.

In conversation with BBC Mundo he explains why.

Mexico and Cuba have been countries with close, historical ties that have generated a certain brotherhood. Has that influenced the way Mexicans see Cuba and its social and political problems?

Historically there has always been affinity between Cuba and Mexico at the level of society. It is an affinity that materializes in personal ties, cultural, social, scientific, geographical interaction.

However, economically it is not horizontal. We Mexicans go on vacation, and many Cubans stay in Mexico to study or live in a nearby country with greater freedoms, but nothing more.

Mexican society has changed radically in terms of being more cosmopolitan and having referents that were once negative, such as the United States or the capitalist European countries.

And that perception of the common Mexican in the United States has gradually changed from a nationalistic and negative vision to a more open perception, more empathetic towards integration in North America.

That change in perception, and the adoption of its political-democratic and human rights values, has caused part of society to distance itself from that affinity with Cuba.

That is to say, Cuba went from being one of the most constant and proximal international referents of the Mexicans, to a country, among several, with enormous cultural wealth, but with important lags in terms of democracy and human rights; that is, increasingly different from Mexico.

But is there still a part of Mexican society that looks at Cuba with a lot of empathy?

In the Cold War, the referents of the common Mexican were the relatively close ones. United States, Latin America and Cuba, mainly.

For decades, Cuba played a key role in the perceptions of ordinary Mexicans regarding the outside world. But today, for the Mexican who has more international references, Cuba occupies a less and less place.

And that is very good for Cuba, because it is less the target of criticism regarding its complex and almost static internal situation.

Lately it was much more Venezuela. Today’s Venezuela is what Cuba was to the Mexican right, in terms of strong and constant criticism of democracy and human rights.

So Cuba is much less a protagonist in Mexican political life and that has been good for the Cuban government because it has less criticism in Mexico than before.

Not because of improvements in its internal conditions, but in light of the fact that the Caribbean country is less relevant for Mexicans.

The Mexican governments of the 20th century were always close to Havana, even those not as ideologically related as that of Carlos Salinas, how do you explain it?

Salinas was, of course, neoliberal president economically, but cautious politically, for which he supported the government of Fidel Castro. He was pragmatic.

The governments of the Institutional Revolutionary Party (PRI) have historically always supported the Cuban government for a simple reason: Mexico supported Cuba -in political, diplomatic, economic, commercial terms- while Cuba was respectful of Mexico and did not encourage an armed revolution or politics.

That was the great pact since the Revolution of 1959 that even reaches the present moment.

It was a tacit, implicit agreement that was effective for both parties. Both sides gained in a dimension of pragmatism.

Felipe Calderón, although a PAN member, although neoliberal, his foreign policy was defined by a pro-Latin American perspective. He was the one who promoted the creation of the Community of Latin American and Caribbean States (CELAC).

Very different from his predecessor, Vicente Fox, who destroyed diplomatic relations with key countries, especially Cuba. And Calderón tried to redirect the path or heal the wounds.

Although the above is interesting, we must not forget that the PRI government was more “generous” with the regime in Havana. President Enrique Peña Nieto condoned a US$350 million debt that was recorded as international financial cooperation.

In other words, in financial terms, the PRI has supported Cuba more than it has up to now with López Obrador. The PAN governments were the only ones that did not join this relationship scheme, despite the fact that Calderón wanted to heal the wounds.

Is the arrival of López Obrador and his leftist support base a return to Mexican social support for Cuba?

It is a part of society that does have that vision.

Foreign policy in every country, but especially in the government of López Obrador, is an instrument of domestic policy.

Let’s talk about the visibility of the president. What he does on his first trip to the south is, first of all, to send a national message by establishing himself as a regional leader in Central America and Cuba, and secondly, effectively, to exercise his leadership role in the region.

A trip to reinforce its weight, its presence, its influence, its rating, at the national level among his relatives and as far as he can go. This ideological identification between the Cuban government and the Mexican government is used, with which it coincides in some -not in all- aspects.

Mexico tries to show itself as a country of solidarity, a brave country, that promotes the interests of Cuba or its historical needs, in terms of the US embargo, but above all it is an exercise in visibility in favor of President López Obrador by resorting to Cuba.

This is not new, this is normal in any country. But in the Mexican case, resorting to Cuba via our foreign policy, so that the current government gains visibility, gains strength, gains prominence, gains legitimacy, in leftist and progressive circles and in more social sectors, is historic and effective. .

Cuba is an ace up the sleeve of the Mexican president who is in office. And it is a successful ace, regardless of the government in question.

And would López Obrador expect success because there is a majority in Mexican society that receives that message?

It is relatively successful, because the message is directed at your followers and potential followers.

But an important part of Mexican society does not agree with this trip, criticizes it and even rejects it.

But Mexico, I repeat, is very different from before.

Before, the common Mexican traveled and felt more identified with Cuba and embraced the idea that the current president of Mexico would travel to Havana. Now there is a more open, more cosmopolitan, more critical Mexico, because this trip does not endorse that sector, it rejects it, it criticizes it.

For this sector of the Mexican population with a more international vision, President López Obrador’s trip to the island is not appropriate.

The opposition criticizes that this trip means supporting a country that is not democratic, that does not respect human rights, where there are enormous gaps in terms of political and social freedoms, which further divide us as a country.

Based on his democratic bonus (30 million votes in his favor in the presidential elections), López Obrador could be a benchmark in democratic matters in the region. But that is not in the interest of the Mexican president and this trip weakens him in that regard.

Do Mexicans who maintain empathy for Cuba overlook social problems because of their ideological affinity?

The Mexican left is very romantic and idealistic. Here we have more than 100 years without a revolution and it is very easy from political stability to look favorably on a revolution as an act of war and as a process.

Mexicans go to the island, they go to Varadero and close one eye regarding the limit of human freedoms, while they open the other eye to enjoy that Caribbean paradise.

But they certainly do not look at what has really been happening in the country for more than six decades in terms of democracy and human rights, which, in light of the Mexican evolution in this regard (with several experiences of alternation in government), is an inconsistency.

The Mexican left is very partial in its assessment of the Revolution, but it is easy to applaud it from a country where there are more freedoms, not absolute, there is more democracy, not absolute, human rights are respected, insufficiently, but seek.

It is even a heroic and anti-imperialist act to support Cuba without accepting that our greatest social, economic, cultural, financial, political bond is with the United States and other economically liberal countries and, as it is said here, politically conservative.

Mexico is much more involved in all these aspects with the United States, infinitely more, than with Cuba, which in practical terms, in recent years, is increasingly further away from the Mexicans.