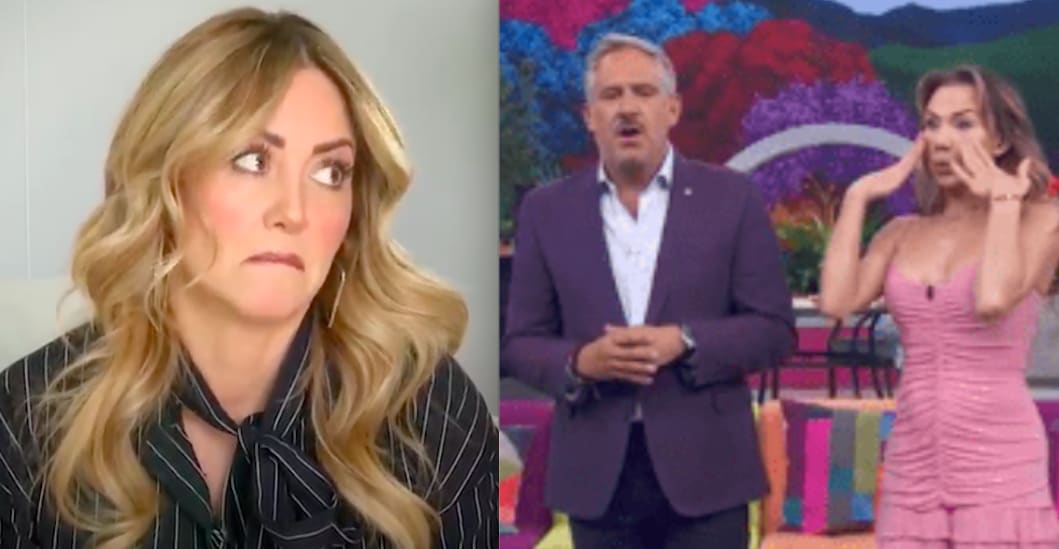 Andrea Legarreta is absent from the Hoy program: What a surprise that many viewers took away after during the program of Televisa, Today, The host Andrea Legarreta did not appear and in her place was the actress Michelle Vieth, what will have happened to Erick Rubín’s wife?

The beautiful presenter, Andrea Legarreta is undoubtedly one of the longest-lived main conductors in the program Today, And it is that since its first broadcast in 1998, the charismatic presenter was already part of the main conductors of the project, being only in the year 2000 to 2002 where the actress would not participate.

Andrea Legarreta is absent from the Hoy program

With this in between, it was quite surprising for everyone when this Friday, August 13, the Mexican host, Andrea Legarreta, did not appear on the morning show of Televisa Hoy, and was instead replaced by the actress from the United States, Michelle Vieth, who was returning to the company after years of absence.

It was at the beginning of the program where viewers did not go unnoticed the absence of Andrea Legarreta, where many wondered what had happened to her, however, no one gave reason, not even the host, since in social networks she did not comment on anything to the respect.

At the beginning of this program, the conductors welcomed the spectators, however, it was the conductor from Guadalajara, Galilea Montijo, who without giving any explanation of the absence of Andrea Legarreta to Today, He welcomed Michelle Vieth with a few short words.

Given this, the protagonist of soap operas such as The stepmother, My little naughty, Friends and rivals, Among others, he answered how happy to be back on the program, although only as a guest host. The blonde returned to television more than a year ago, after she was working on several projects for Tv Azteca.

Andrea Legarreta is absent from the program: It is not the first time that Michelle Vieth is in the Hoy program

Despite the fact that Michelle Vieth had already been announced previously as a guest host of the program, viewers never imagined that Andrea Legarreta was not going to attend, initially believing that the Mexican would rejoin with the passing of the program, however this was not So.

According to the portal The Herald of Mexico, This would not be the first time the beautiful 42-year-old actress would participate in the program, since in the first season of The stars dance in today she was present, but during her participation, the actress cried because of the criticism she received, causing her to vomit in front of everyone.

She was not the only one absent: Andrea Legarreta is absent from the Hoy program

At the end of the participation of the beautiful actress, being fired by her companions, the place of Andrea Legarreta was now replaced in the section The kids of today by the former vocalist of Playa Limbo, Sargento León, where once again the reasons why Erik Rubín’s wife had not attended this day’s program were not stated.

On the other hand, it should be noted that not only Andrea Legarreta was absent, since his partner Raúl el Negro Araiza was absent due to his participation in the telenovela The heartless, However, with Legarreta it has not been said where he is or why he did not attend the program today. YOU CAN SEE THE VIDEO HERE

After the Instagram of Chica Picosa 2 released some photographs where Erik Rubín could be seen dancing with a young influencer, the rumors of the singer’s infidelity to Andrea Legarreta did not take long. Filed Under: Andrea Legarreta is absent from the Hoy program

However, it was the host of the Hoy program herself, who showed her face and broke the silence about her husband’s alleged infidelity. Legarreta offered interviews to various media that approached her when she left the Televiso facilities, such as the reporter Eden Dorantes, who uploaded the talk to her YouTube channel.

The Mexican clarified that there is no infidelity and that the relationship with her husband continues to be one of respect and love: “I do not consider it disrespectful that my husband has a life apart from our life, I mean going out with his friends, sharing with friends, it doesn’t seem bad to me because I also go out with my friends ”.

“This weekend he was there with a group of friends where this girl who is the partner of one of Erik’s friends and us, if you notice, he turns around and knows that the camera is there because in the end it is in a public place, and she is dancing, and she is not doing anything, not kissing, or touching her, so the lack of respect I think is for the way they want to manipulate and handle this information, that is a lack of respect, towards him, towards me ”, he commented. Filed Under: Andrea Legarreta is absent from the Hoy program

The host of the morning newspaper Hoy assured that like every couple has gone through hard times, however, those photos were not the case, since the images did not show anything bad. “He and I know what we live. We also know that we have had tough times, complicated stages, but not this ”.

“This is stupid, wanting to find something negative where there is none. Sorry, but those who think that marriage means that, it means shutting yourself up like a cage and not having an individual life, because I respect them a lot, but for me it is not that ”, explained Legarreta. Filed Under: Andrea Legarreta is absent from the Hoy program

They respect your space

For Andrea Legarreta, respecting individuality has been the key to leading a marriage of more than 20 years and that has resulted in two daughters, Mia and Nina, he assured that because each one has their space does not mean that there are problems in their relationship.

“For me, he has his job, he goes on tour, he goes out with those from the nineties, there are a lot of guys and girls, they stay in hotels, we on tour too and that’s not necessarily why we are painting the horn and betraying ourselves, doing things that can damage our history that is real, which is not an open marriage, but a marriage of two people who love each other from day one and we are together because we love each other ”. Filed Under: Andrea Legarreta is absent from the Hoy program

I wouldn’t put up with a bad marriage

Legarreta said that if she were not comfortable in her marriage, she would have no problem putting an end to it, and assured that the same would be done by her husband, the musician and singer Erik Rubín: “I am an independent woman who could say ‘I don’t want to continue here , I can be alone and be independent ‘, just like him ”. Filed Under: Andrea Legarreta is absent from the Hoy program

According to Andrea’s words, the gossip that has been created around their marriage has already exceeded the limits: “Yes, I think they are already passing. The people of the networks are becoming more cruel, they point out and attack more, not all, I have to clarify, nor all the media and because there are people who have been very respectful towards us ”.

They have been attacked in networks

The also actress, Andrea Legarreta, said that unfortunately a sector of society has been very cruel to her and Erik Rubín after revealing those photographs, which she said were also uploaded by her husband to her Instagram stories, as they undo in offenses and bad comments towards them. Filed Under: Andrea Legarreta is absent from the Hoy program

“Yes, I am very sad about that sector of society where they are waiting for someone to do something that they can distort to attack someone and mock, attack, attack, celebrate the pain of others. That as a society makes me very sad. Those who have a means to publish something, we should have a bit of awareness and empathy ”. Some images of this note come from the following video