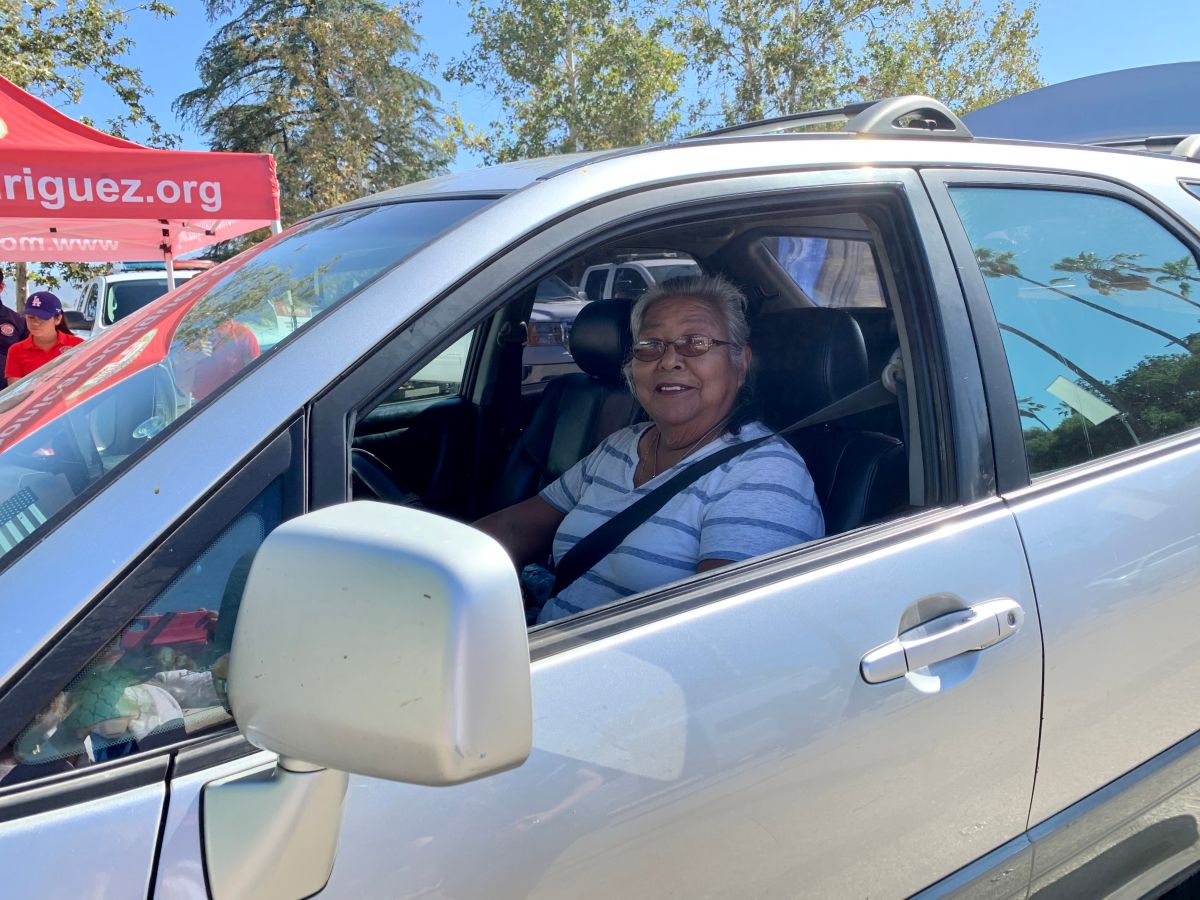 Susan Garcia turned up early to exchange a package of fireworks for gift cards at Brand Park in the Mission Hills neighborhood of Los Angeles.

There were no questions involved, nor did the Los Angeles Police Department (LAPD) officers ask him to identify himself to receive the explosives.

“A friend asked me if I wanted to come and deliver them for him, to help me a little with the gift cards they give in return. He knows that I am a single grandmother, raising two crazy grandchildren, and he wanted to help me. I did him the favor of coming to deliver the fireworks,” said Susan, who lives in the Sylmar neighborhood.

He commented that it felt good to be able to leave them, because they were old fireworks, which are probably not safe. “It’s best to get rid of them.”

Dozens of Angelenos drove to Brand Park in the Mission Hills neighborhood of Los Angeles to hand over hundreds of pounds of illegal fireworks in exchange for gift cards, gas vouchers and even tickets to see Dodgers within the rocket buyback program organized by Councilwoman Monica Rodriguez for Los Angeles Council District 7 which covers most of the northern San Fernando Valley.

The bags and boxes of rockets were transported in the trunks and trunks of the cars, while the bomb squad of the Los Angeles Police Department (LAPD) opened them to collect them, check them and put them in a safe place.

“This is the second annual fireworks buy-back program that we have carried out in which we offer the public the opportunity to anonymously return the ones they have in their homes to motivate them not to use them,” said Councilwoman Rodríguez.

He pointed out that according to the quantity and weight of the fireworks, it is the number of gift cards, gasoline vouchers or tickets for Dodgers they receive.

“The use of rockets is illegal in the city of Los Angeles as they can start fires, cause tremendous trauma to pets, seniors and veterans suffering from post-traumatic stress.”

Last year, during the first illegal fireworks for gift card exchange program, they collected more than a quarter of a ton that the community voluntarily gave away.

“It was fantastic because at the time of delivery no questions are asked, no identity is verified. All we want is to get the illegal rockets off the streets.”

He specified that with the fireworks repurchase program they seek to make the public take responsibility, and invite them to the celebrations and festivals that will take place in the city for the 4th of July.

“At the Hanson Dam we are going to have the first drone light show and a music festival.”

His hope – he expressed – is that based on the success they had last year; and in the one anticipated this year, they may extend the buyback program to the entire city of Los Angeles to provide residents with an alternative and solution to illegal fireworks.

“Fireworks are a real problem not only in my district but throughout the city. I am grateful that residents cooperate and participate in keeping our community safe.”

There are many damages

David Ortiz, a spokesman for the Los Angeles City Fire Department, said the point of exchanging fireworks for gift cards is to reduce the number of injured people on the streets.

“We also see an increase in the number of fires due to these fireworks. You can never control where they will fall. Especially the mortars, people bring them illegally to this state”,

He said that he understands that they are a diversion in the country, but they represent a danger and a threat especially in the communities built between the slopes and hills where there is dry vegetation. “After three years of drought, the threat of fires is increasing.”

He noted that mortar rockets are cylindrical, put in a tube and launched and explode in the air.

“Mortars are illegal in California; but in the south of the state, there are 12 different types of fireworks that are commonly seen, including the M80 which are very loud and explosive”.

He said those kinds of fireworks are dramatic for veterans who have the trauma of war, and when they come home, they feel like they’re back in a war zone.

“Those M80s scare pets too, and the 4th of July is when you see the most lost pets in our township, and they end up in animal shelters. Most are never reunited with their owners.”

He added that each year in the country, there are more than 16,000 injured people, 1,000 of them are children under 5 years old.

“Last year we had like 18 people injured in Los Angeles County. It’s tragic and unnecessary.”

He mentioned that in Latin American countries there is a culture of playing with rockets and when we come here, we continue to launch rockets because they bring back good memories with family members.

“But just as we have managed to change the culture, and use a helmet to ride a bicycle and a seat belt in the car, we must become aware of the danger and leave them behind.”

He added that people think that it will never happen to them, but when they have gone to the scene of an emergency, they have witnessed first-hand, the shame on the faces of the father and mother, when one of their children was injured. painful and permanent by fireworks.

‘I don’t want them around’

Clark James said that when he heard about the fireworks buy-back event, he decided to turn in the ones he had in his house.

“This event is a great opportunity to get rid of them. I don’t want to be around them.”

He said he bought the fireworks because he works for the television special effects industry, and the ones he took to deliver are the ones he had left.

“It’s not something we typically use. It is best not to keep them around you. By handing them over, I feel safer.”

And he applauded the fireworks buyback program, saying it’s a great opportunity to get fireworks out of the hands that can spark fires in California during the worst of fire season.

The deputy chief of the Los Angeles Police Department (LAPD), Alan Hamilton, said it is important to remove fireworks from the streets so that people do not get injured and do not cause fires in the mountains.

“We invite you to come enjoy the many professional fireworks shows that will be on July 4th around Southern California.”

He recalled that fireworks are dangerous, especially those made at home; or they come from other countries for which quality control is unknown.

“When these two things are put together, they are not very unsafe and very dangerous.”

Commander Hamilton called on Angelenos not to use rockets in the community.

“I would remind you that you are subject to arrest and that there are undercover LAPD officers in plain clothes as well as uniformed police officers who are going to be watching for rockets during the 4th of July holiday.”

So he said if they’re in possession of fireworks, it’s a misdemeanor and a fine; and if they are selling explosive rockets, they can potentially commit a serious crime; And if they injure or kill someone, it’s serious.”

His greatest wish, he emphasized, is that all Angelenos enjoy Independence Day safely.