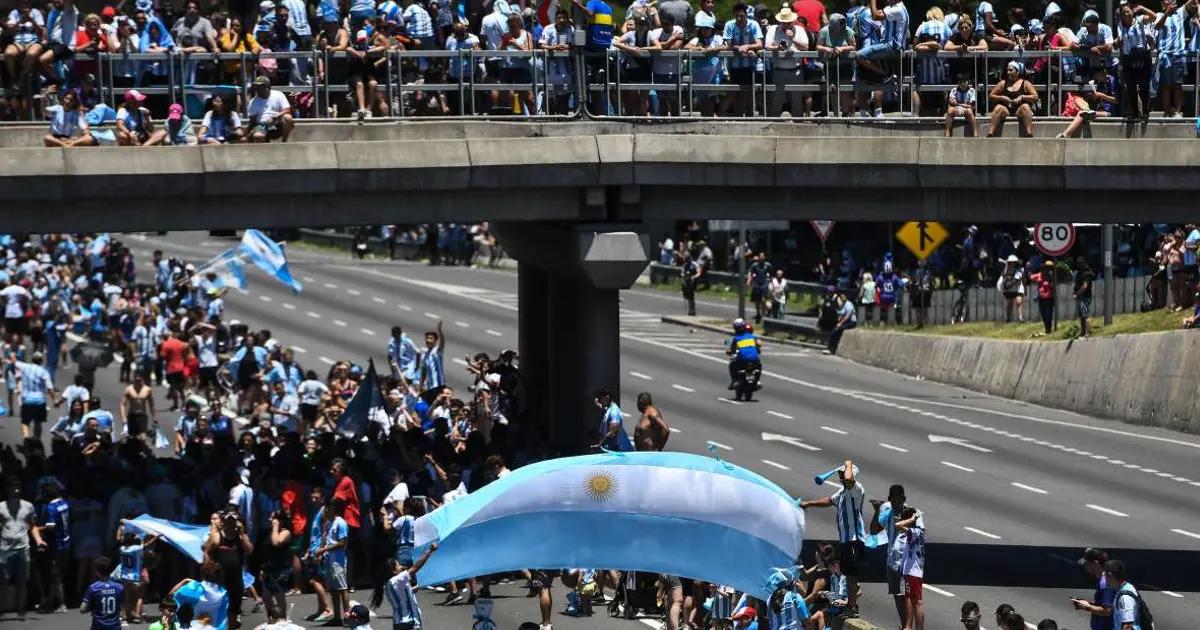 The streets of Buenos Aires have been in a frenzy since Argentina’s national team became World Cup champions for the third time after a 36-year drought. After landing in their homeland this Tuesday, the players were greeted by thrilling supporters. An unusual and dangerous situation occurred in the afternoon when the caravan of the South American team was passing under a bridge, and two fans decided to jump into the void to fall into the bus.

This is what Buenos Aires looked like from above:

According to information from the local media Infobae, the convertible bus of the national team was moving under the Olavarría Bridge, in a border area between Villa Madero and Villa Celina. While the bus was traveling on the Riccheri highway towards the Federal Capital, two people jumped inside the bus.

In the video that went viral on social networks, it can be seen how the players realized the intention of the fans and made warning signs that were ignored. In the clip is fully visible how a fan could fall inside the vehicle and stand, putting the integrity of the players at risk.

However, the other person was not as lucky, as he miscalculated and threw himself seconds later. He hit the back of the bus and fell to the pavement, surrounded by a crowd.

In the clip, security members quickly tackled another fan inside the bus as soon as he fell. This episode led to a return to the national team’s sports complex and a helicopter tour of the Obelisk area.

The video shows the exact moment when the two Argentine fans tried to reach their idols and jumped from the bridge:

Another fan did the unthinkable, putting his life at risk when climbing on top of the Buenos Aires obelisk, at 67 meters above ground:

The reception of the Argentines in the streets has been crazy and far exceeded the planned security arrangements. According to Infobae, at least five million people showed up in different corners of the city to celebrate with the players.

Some places were unbelievably crowded:

Several local media reported that this episode occurred earlier, after the arrival of the Albiceleste at the airport in the early hours of the morning. Scaloni’s players made that first trip in an open-top bus, and apparently, another fan jumped into the vehicle and had to be helped by the players to avoid falling into the void, thus achieving his goal.