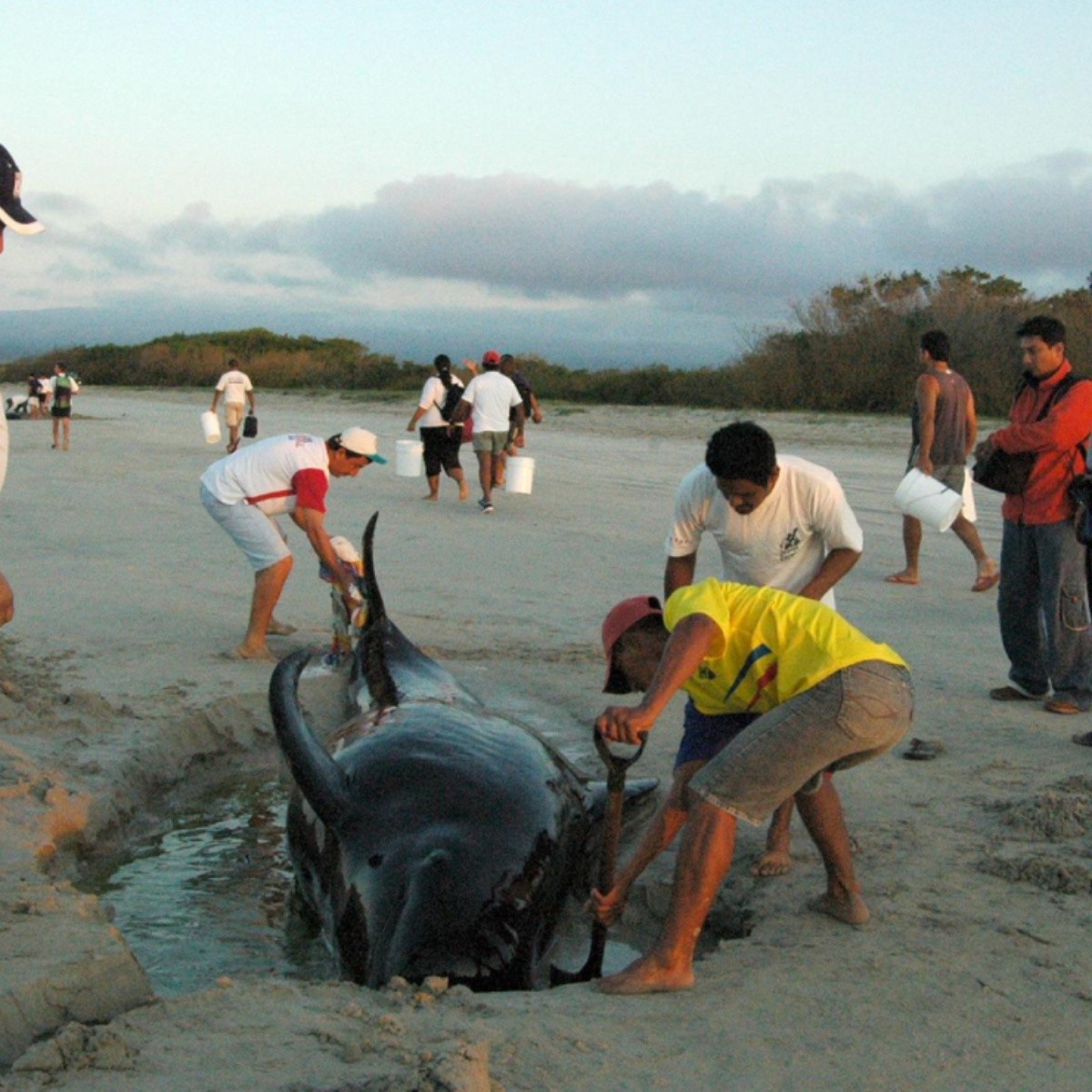 Ocean Beach, Australia.- Nail 200 pilot whales died after being stranded on a wave-swept beach on the rugged west coast of the Australian island of Tasmania, where The rescuers were only able to save about thirty copies this Thursday.

After an intense day of efforts in difficult conditions, only 32 of the approximately 226 pilot whales found stranded on the beach were able to be rescuedaccording to the state wildlife services.

“We have been refloating those whales deemed fit to be released into the sea,” Sam Thalmann, a marine biologist, told AFP.

“Every whale that has been released has been tagged. Unfortunately there may be a few that run aground again, but we expect most to head further out to sea,” he added.

Since the animals were found off the west coast of this South Australian island, locals have covered the pilot whales with blankets and doused them with buckets of water to keep them alive.

But in most cases it was not enough.

“Unfortunately, we have a high fatality rate in this stranding. This is mainly due to the exposure conditions at Ocean Beach,” Brendon Clark, operations manager for local wildlife services, told reporters.

“The environmental conditions, the waves that are on the exposed west coast, it is certainly taking its toll on the animals,” he added.

Among the tasks was also the removal of animal carcasses to avoid attracting sharks to the area.

Two years ago, that same area was the scene of the stranding of almost 500 pilot whales, the largest recorded in the country. More than 300 died despite efforts to rescue them.

Clark said conditions were less harsh then for the cetaceans because they were “in much more sheltered waters.”

– Investigation of the causes –

The remains of the dead animals will be subject to autopsies to try to find out the reason for the stranding, often unknown.

Scientists suggest that it may be due to specimens that lost their way after searching for food near the coast.

Pilot whales, which can grow up to six meters, are highly social animals and follow mates who may be in danger.

It sometimes happens when old, sick or injured whales swim to shore and other pod members follow them, trying to respond to distress signals from the stranded whale.

Others believe that gently sloping beaches like those in Tasmanian they confuse the sonar of the cetaceans and make them believe that they are in the open sea.

This week, 14 dead young male sperm whales had also been found washed up on a remote beach on King Island, situated between Tasmania and the Melbourne coast.

The death of the cetaceans could be a case of “misadventure”, wildlife biologist Kris Carlyon, of the state government’s environmental agency, told the local Mercury newspaper.

Strandings of large aquatic mammals are also common in nearby New Zealand, with an average of 300 animals stranded each year, according to official data.

Discoveries of 20 or 50 pilot whales are not uncommon there. Even in 2017, there was a massive stranding of almost 700 specimens.