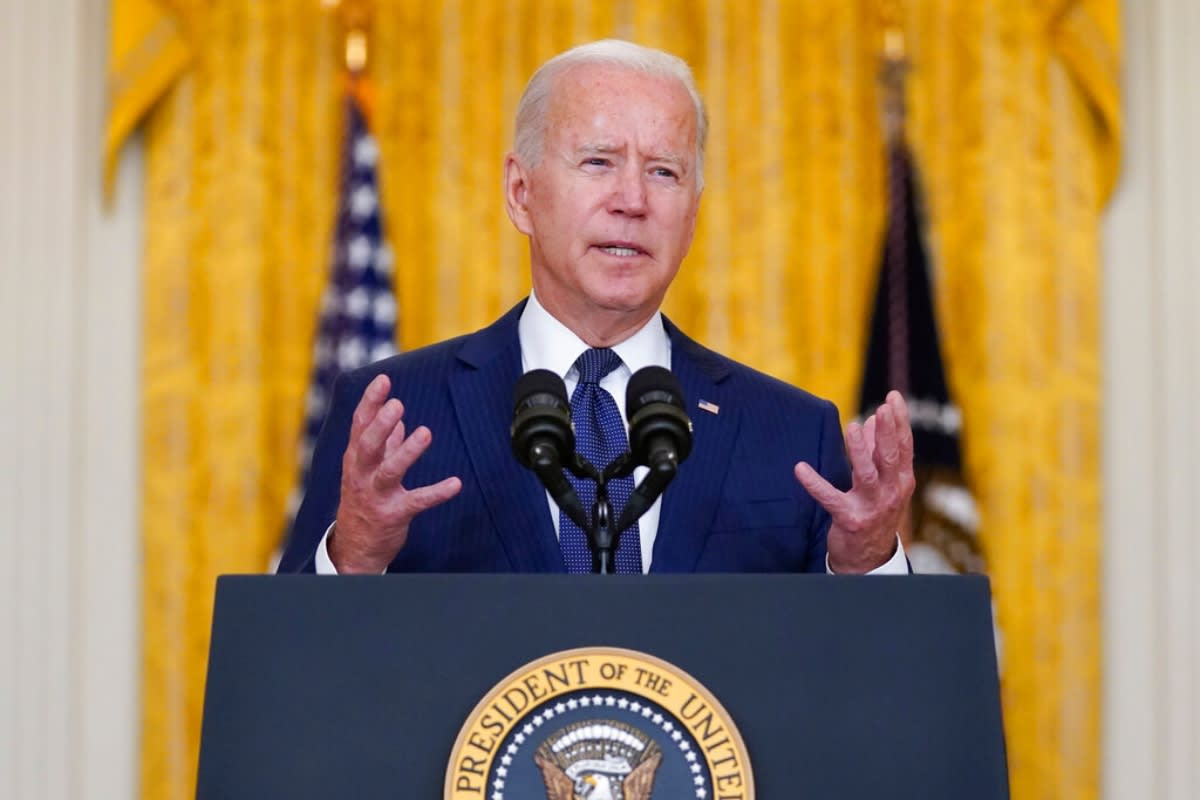 Biden reacts Kabul attacks. After the bloody attacks in which at least 18 American soldiers died, President Joe Biden on Thursday launched a serious threat to the Islamic State (IS), assuring that he will persecute them and make them pay for the attacks, in a speech to the nation from the White House.

The President Biden vowed revenge after 13 US soldiers were killed and 18 others injured in the attacks on the Kabul airport, which the Islamic State (IS) group has claimed. “We will persecute them and make them pay,” promised the president, visibly moved, as reported by the Efe news agency.

Biden reacts to Kabul attacks: “Terrorists will not win”

In this sense, he stressed that he has asked the heads of the Armed Forces to draw up different plans to attack IS enclaves, ensuring that they know “who they are.” Biden reiterated that the US will continue with the evacuation, since the “terrorists are not going to win” and was open to sending more troops to guarantee the mission, but pointed out that the commanders had not requested it for the moment.

“I have instructed the military that if they need additional forces, I will approve it,” he said. The Pentagon has noted that there are currently 5,000 people inside the airport waiting to board one of the evacuation planes. The attack occurs five days before the date set by Biden himself for the end of the evacuation mission and the withdrawal of troops from Afghanistan, on August 31. Filed Under: Biden Reacts to Kabul Attacks.

This is the first fatal attack suffered by US troops in Afghanistan since February 2020. The US believes that a suicide bomber of the terrorist group IS detonated a bomb at one of the entrances to Kabul airport, the so-called Abbey Gate, while another he detonated the explosives he was carrying near the Hotel Baron, located in the vicinity of the airfield, which was followed by an armed attack.

After his speech to the nation from the White House, President Joe Biden also assumed responsibility for the attack in Kabul that has left dozens of fatalities, but defended that his “only alternative” is to remove US troops from Afghanistan. Filed Under: Biden Reacts to Kabul Attacks.

Biden reacts to Kabul attacks: “I am responsible”

“I am responsible, fundamentally, for everything that has happened lately,” Biden acknowledged in response to questions from the press after addressing the nation in a televised speech. Despite assuming responsibilities, he recalled that his predecessor Donald Trump (2017-2021) reached an agreement in February 2020 with the Taliban, to withdraw US forces from Afghanistan before May 1, in exchange for the insurgents not welcoming terrorists and will not attack foreign troops.

Thus, upon reaching the White House, Biden found that he only “had an alternative.” As he said today, his only option was to continue with Trump’s agreement to remove US soldiers from Afghanistan. “I have never,” he said, “been of the opinion that American lives should be sacrificed to try to establish a democratic government in Afghanistan, a country that has never in its entire history been a nation. And that it is made, and I am not saying it in a derogatory way, of a group of different tribes that have never, never gotten along ”. Filed Under: Biden Reacts to Kabul Attacks.

Although Biden kept his predecessor Trump’s agreement with the Taliban, he did push back the withdrawal date from May to September, although he later brought it forward to August 31. The Pentagon has reported the death of 13 US soldiers and 18 wounded, while official sources in Kabul account for at least 60 dead and 140 wounded, mostly Afghans trying to board some of the evacuation flights from the countries. allies.

The Islamic State affiliate that has claimed responsibility for the attack is known as the Islamic State of Khorasan (as the jihadists refer to Afghanistan). It was created in 2015 and is a staunch enemy of both the United States and the Taliban, according to the Efe news agency. Filed Under: Biden Reacts to Kabul Attacks.

Biden reacts to Kabul attacks: the death toll rises to 13

The United States Armed Forces on Thursday raised the death toll to 13 and the number of wounded among US soldiers to 18 in the attacks on the Kabul airport, which has been claimed by the terrorist group Islamic State (IS), according to the agency of news Efe.

This was reported by the spokesman for the US Central Command (CENTCOM), Captain Bill Urban, in a statement. Previously, the US authorities had indicated that there were 12 soldiers killed and 15 wounded. Urban explained that the death toll increased after the death due to injuries sustained by one of the soldiers during the explosion that occurred next to one of the entrances to the airport, the so-called Abbey Gate. Filed Under: Biden Reacts to Kabul Attacks.

Wounded are in the process of evacuation

Captain Bill Urban added that the wounded are in the process of being medically evacuated from Afghanistan in a C-17 plane, equipped for this type of cases and that has surgical units. From Kabul, Afghan official sources told Efe that there were more than 60 deaths and another 140 injured by the double attack, although they did not specify if the Americans were among those victims.

Previously, the head of CENTCOM, General Kenneth McKenzie, explained in a press conference at the Pentagon, in which he telematically intervened that two IS suicide bombers detonated the bomb vests that were attached to his body outside the airport. One of the devices was detonated near the Hotel Baron, near the airport, and the other exploded at one of the access doors of the airfield, in whose surroundings there were thousands of Afghan citizens trying to enter to leave the country on international evacuation flights. Once the explosions occurred, “IS fighters opened fire on civilians and military forces” in the area, the general said. Filed Under: Biden Reacts to Kabul Attacks.

USA orders flags to be flown at half mast

The government of President Joe Biden ordered this Thursday that public buildings fly the United States flag at half mast, after the death of dozens of people in a double suicide attack perpetrated by the jihadist group Islamic State (IS) at the Kabul airport .

White House spokeswoman Jen Psaki announced at a press conference that the decision includes the White House, federal government buildings, military posts, naval stations and ships throughout the country, as well as in its territories. Psaki assured that the measure, which will be in effect until the evening of next Monday, is “in honor of the victims of acts of senseless violence in Kabul.” Filed Under: Biden Reacts to Kabul Attacks.

The IS takes responsibility for the attacks

The IS claimed this Thursday a double suicide attack that the Kabul airport left with at least 60 dead and 140 wounded, mostly Afghans who tried to board some of the evacuation flights from the allied countries, which also suffered victims between their ranks.

The Pentagon reported that at least 13 US soldiers have been killed and 18 others injured in the double attack, which was followed by an armed attack. In a message to the nation, President Biden promised revenge against the perpetrators of the attacks, whom he assured that he will persecute and make them pay for the attacks. Filed Under: Biden Reacts to Kabul Attacks.

The attack, the first fatality suffered by US troops in the Central Asian country since February 2020, occurred five days before the date set by Biden himself for the end of the evacuation mission and the withdrawal of troops from Afghanistan, on 31 of August.

President Joe Biden called the 13 US soldiers who died in the Kabul airport bombing as “heroes” while assisting in evacuation efforts. Biden gave a speech to the nation, after those 13 soldiers were killed and 18 others were injured, in the attacks on the Kabul airport, which the Islamic State (IS) group has claimed. Filed Under: Biden Reacts to Kabul Attacks.

Trump Says “Savage” Attack “Should Never Have Been Allowed”

Former President Donald Trump considered Thursday that the “savage” attack near the Kabul airport, in which at least 13 US soldiers died, “should never have been allowed.” Trump did not go so far as to directly criticize his successor, Democrat Joe Biden, against whom he has lashed out in recent days for the US exit from Afghanistan.

“This tragedy should never have been allowed, which makes our pain even deeper and more difficult to understand,” Trump, who ruled the US between 2017 and 2021, said in a statement. With a less aggressive tone than in others At times, he conveyed his condolences and those of former First Lady Melania Trump to the “brave” members of the Armed Forces. “Our thoughts are with the families of the innocent civilians who died today in the savage attack on Kabul,” he said. Filed Under: Biden Reacts to Kabul Attacks.