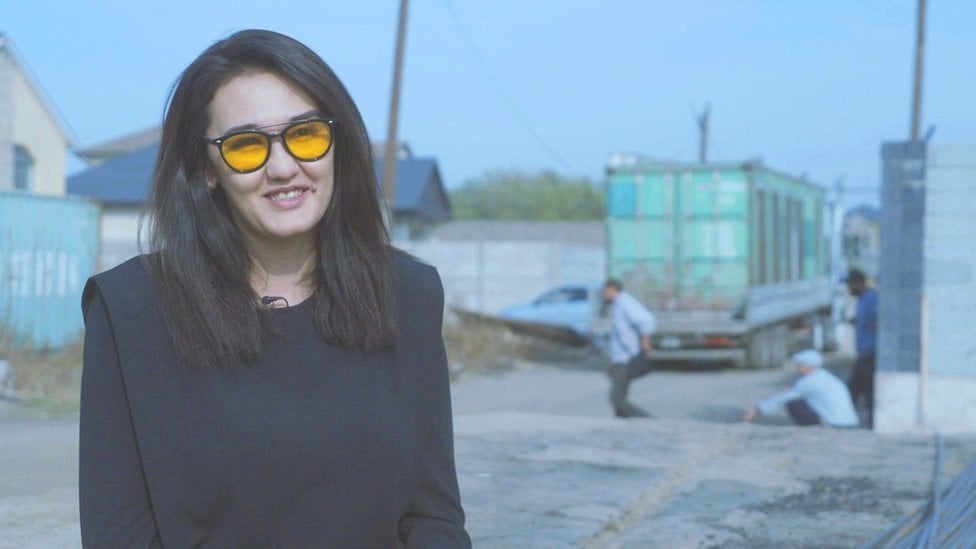 As Moldir Shubayeva walks through the dusty construction site of her new bitcoin mine, she stands out from the crowd of engineers and laborers.

The smartly dressed 35-year-old stares through giant yellow-lens sunglasses as welders blow sparks from inside dumpsters and trucks dump tons of gravel fill into the building foundation.

Moldir is one of the new generation of crypto entrepreneurs in Kazakhstan and is overseeing every detail of his new bitcoin mine in the city of Almaty.

She became a big name in a male-dominated industry, respected for growing her mining company to become one of the most important in the country.

“I have spent the last four years of my life almost exclusively at work and sometimes I even sleep in my office,” he says.

Moldir became interested in bitcoin about five years ago and started mining coins with his brother at home before building larger mines and renting them out to clients.

The growth of his business and industry in Kazakhstan has been relentless, he says, particularly in the last year.

“The morning starts with me checking the price of bitcoin to see how much it has grown. When it hit $50,000 per coin it was really exciting! It’s constant adrenaline,” she says.

Since then, its value has dropped significantly, to around $35,000 at the time of this writing.

But for Moldir and many others in Kazakhstan, crypto mining still generates considerable wealth.

Crypto mining is the process that underpins many cryptocurrencies, such as bitcoin, ethereum, and litecoin.

This digital money has no central authority and no banks. Instead, every payment and transfer is verified by a vast network of volunteer computers.

The calculations are extremely complex, so the task requires a lot of computing power.

As an incentive, the system rewards people who contribute to the effort with bitcoins.

Thanks to companies like Moldir’s, Kazakhstan became second only to the US in bitcoin mining. now contribute with about 18% of the power of the global network that keeps the currency running.

The industry began to establish itself here in 2019, thanks to the cheap and abundant electricity supplies of Kazakhstan and at crypto-friendly government policies.

But in the summer of 2021 it really took off, thanks to a sudden and unexpected ban on all crypto mining in neighboring China.

Companies flooded the country, bringing with them tens of thousands of computers.

Kazakhstan’s mining facilities were overwhelmed and new ones were needed to handle the influx.

You can get an idea of ​​the scale of the industry if you travel 1,300 kilometers from Almaty to Ekibastuz, a

Here you will find what was until recently the largest cryptocurrency mine in the world, built by the company Enegix.

The first thing you notice when you enter this megamine is the noise.

And at the other end you can hear the constant hum of a large fan that cools the room.

“The sound of the machines working excites me because it is the sound of money, digital money“, says Yerbolsyn, 34, owner of the facility, with a big smile.

The company grew from a small garage with just a handful of computers to the facility it now oversees that houses $300 million worth of equipment inside eight large hangars that mine cryptocurrency 24/7.

150 people are employed to keep the machines running, with dozens of engineers working and living in the arid desert region for 15 days at a time.

Almaz Magaz, 19, works 12-hour shifts. His main task is to keep the dust out of the hangars in case it affects the machines. When there’s a break, it’s up to him to fix it and get it up and running as soon as he can.

He admits that at first he had no idea what the machines were doing.

“I didn’t know about bitcoin before I came here. I had never heard of it!” she assures.

Almaz’s work, and that of the rest of the staff, is supervised by Yerbolsen through a large bank of CCTV signals in Almaty.

“We are proud that Kazakhstan is now so important to the world of cryptocurrencies,” says Yerbolsen. “We are patriots and we want to raise the flag of our country even more!”

But not everyone is proud of the country’s recent success. Environmental activists often criticize cryptocurrencies for the amount of energy used to mine them.

It is not known how much of that energy is renewable, but climate expert Dana Yermolyonok says that in Kazakhstan only 2% of energy comes from renewable sources.

“Here it is mainly coal. Especially when it comes to heat generation and electricity generation,” he says.

Dana lives in Karaganda, the city that has one of the largest coal basins in the country, and doubts that the wealth generated by crypto mining is worth the environmental cost.

“Every day, when I leave my house, i can see the contamination. In winter, when there is no wind, I can’t even see my next door neighbor’s building. I don’t see why I have to breathe this air, while they are generating income”, she maintains.

There are also concerns that crypto mining could lead to power shortages.

The government says that in just one year mining contributed to a increase of between 7% and 8% in the electricity used throughout the country.

The amount of electricity going into mining in the country is now equivalent to what it takes to keep the lights on in a big city here.

In November last year the country imported additional electricity from Russia to meet increased demand, and restrictions were introduced on mining in regions where supplies are lowest.

This caused some miners to close their facilities and try to relocate.

Askhat Orazbek, Deputy Minister of Digital Development of Kazakhstan, acknowledged to the BBC that the rise of cryptocurrencies in his country has been too fast and that it needs to be controlled.

“There are doubts about the volume of electricity that miners now consume. If in 2019 we said that we had surplus energy, now we are no longer talking about the surplus. Electricity is not infinite in Kazakhstan, so we can say that at a certain volume of mining we will stop“.

The Orazbek government introduced a tax in January 2022 that further taxes the mining industry on the electricity it consumes. They expect the additional revenue can be used to help create cleaner energy sources.

“Today, mining in Kazakhstan really consumes what is called dirty energy,” he said.

“That is why we say that a certain fee will be introduced for cryptocurrency miners (…). Y any further development will only be possible if green energy infrastructure is built“.

However, unlike some countries like China and Kosovo, and potentially Russia, Kazakhstan appears committed to keeping its mining industry going.

“Our goal is not to miss this moment and to be among the participants of this crypto revolution in the world,” he added.

Kazakhstan is still reeling from violent protests that erupted earlier this month following a sudden spike in fuel prices.

There was no direct link to crypto mining, but the incident showed two important points.

First of all, what can happen when the energy supply is threatened. And secondly, how important Kazakhstan has become for the world of cryptocurrencies.

When the Kazakh government shut down the internet for five days, the global bitcoin network slowed down significantly and the price of coins dropped.

It is clear that the stakes are high for the government in dealing with this new nascent industry.