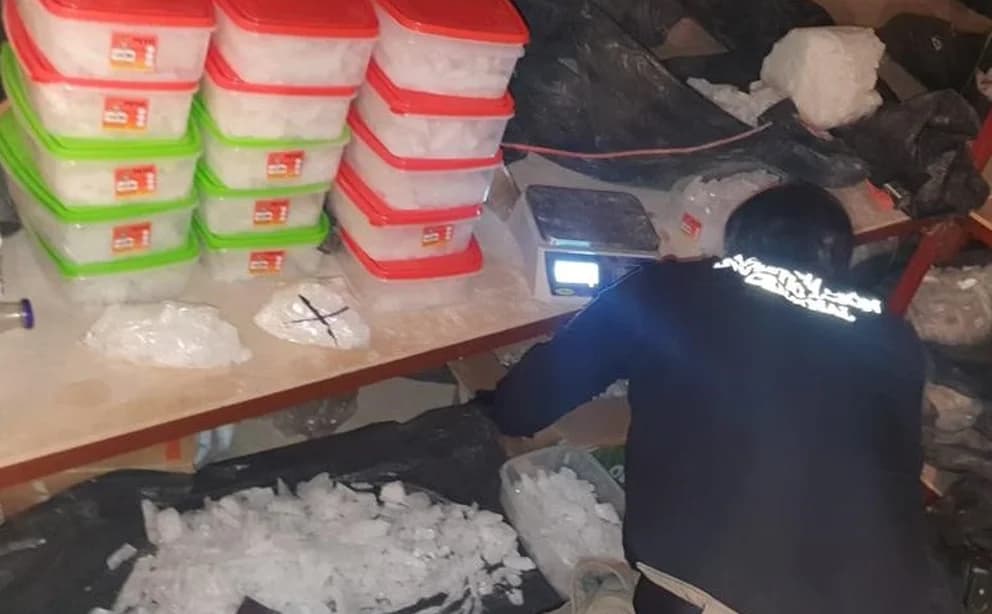 The shipment corresponds to more than 400 thousand doses of methamphetamine, which was withdrawn from the illicit market in coordination with the Fiscalía General de la República Mexico (FGR).

Federal authorities seized 400 kilograms of crystal in Culiacán , a bastion city of the Sinaloa Cartel; the amount of synthetic drug seized corresponds to more than 400 thousand doses, which were made available to the competent authorities.

Through a statement, the Secretary of National Defense (Sedena) reported the seizure that occurred on Saturday, March 12 in the capital of Sinaloa, which was achieved thanks to an anonymous complaint received from local authorities, which led to an investigation.

“As a result of intelligence work, it was determined that an address located in the 7 Gotas neighborhood, in the city of Culiacán , Sinaloa, was used for the storage of synthetic drugs, for which military personnel and the National Guard constituted a force together and moved to the scene of the events, providing peripheral security , at the same time that authorization was requested from the judicial authority to carry out the search of the reference property, ”said the Sedena.

After carrying out the search, the federal security elements managed to seize 400 kilograms of synthetic drug with the characteristics of crystal contained in 66 bags, 10 coolers, 8 containers and 3 tubs ; 3 drums of 50 liters with a colorless liquid substance; a 50 liter drum with a brown liquid; 2 motorcycles; a tub of white powder; a property and a vehicle.

According to what was communicated by Sedena, the insurance managed to “ prevent more than 400 thousand doses of this type of substance from damaging the health of the national and international population ; endorsing its commitment to watch over and safeguard the well-being of Mexicans.”

Read also: Blow to the Sinaloa Cartel, seized 4,409 pounds of fentanyl, coca and meta at the border

One day after the seizure, on March 13, Chihuahua authorities announced the capture of Antonio Leonel Camacho Mendoza, alias Osama Bin Laden or El 300 , an operator of the Sinaloa Cartel linked to the murder of a police officer.

Through a statement, the Attorney General of the State of Chihuahua (FGE) reported that it managed to capture the alleged criminal in the city of Tuxtla Gutiérrez, Chiapas , where he was arrested by elements of the Ministry of National Defense in collaboration with the National Guard.

“Antonio Leonel CM, alias “El 300″ or “Bin Laden” is designated as the leader of assassins of the criminal group called Gente Nueva allied to the Sinaloa Cartel , considered the main generator of violence in the southern region of the entity, having a presence mainly in the municipalities of Parral, Santa Bárbara, Balleza, Guadalupe y Calvo, Matamoros, Allende, Coronado, López, San Francisco del Oro, Huejotitán, El Tule and Valle de Zaragoza,” the agency reported.

After being captured in the capital of Chiapas, El 300 will be transferred to Chihuahua , a state in which he is accused of having planned the execution of the Parral Public Security coordinator, in addition to having disappeared one more from the same corporation.

During the first three years of the Andrés Manuel López Obrador administration , Mexican authorities have arrested 125 members of the Sinaloa Cartel, 108 of the Jalisco New Generation Cartel (CJNG) and 96 of the Gulf Cartel .

According to an intelligence report, despite the fact that López Obrador’s security policy is not focused on the arrest of criminal leaders, there are already more than a thousand leaders and operators of organized crime detained.

Other criminal groups hit hardest by this administration are La Familia Michoacana, with 92 arrests; the Tepito Union, with 89 and the Juárez Cartel, with 57 apprehended assassins.