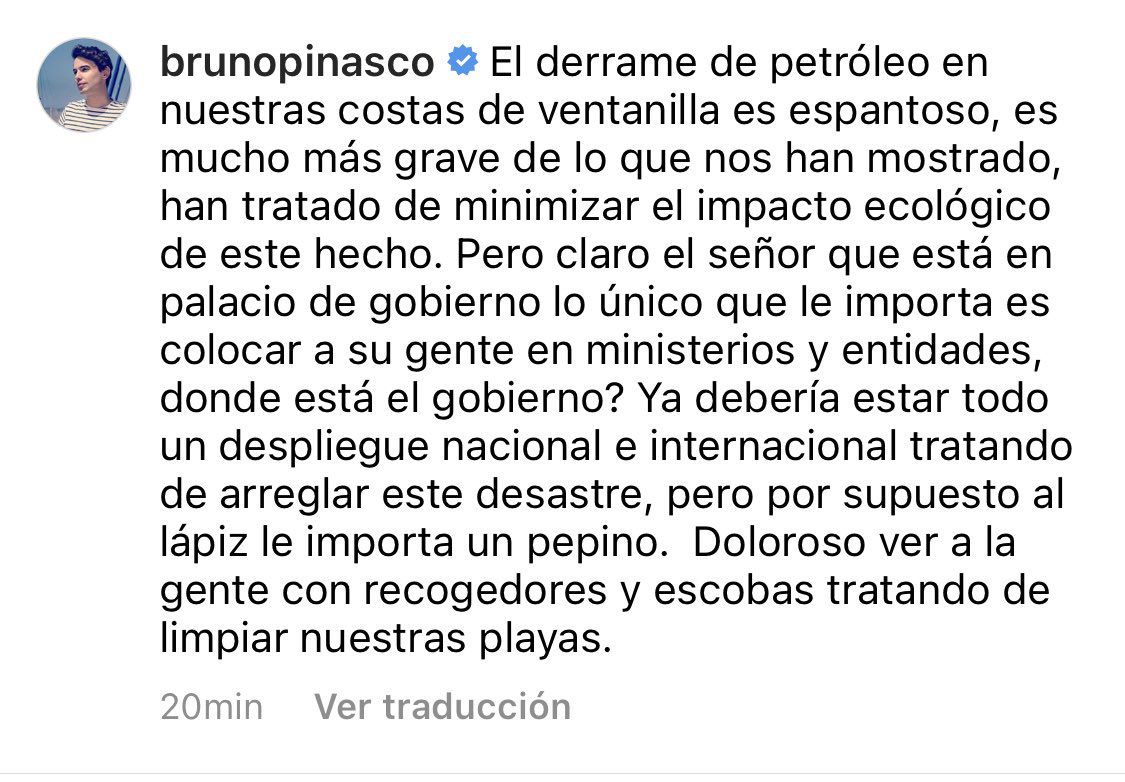 The ecological disaster that was generated after the spill of some six thousand barrels of oil in the Ventanilla Sea continues to arouse outrage. This time, it was Bruno Pinasco who decided to use his social networks to comment on the subject, although his opinion earned him a wave of criticism.

LOOK: ‘Yuca’ returned to JB: this was what Jorge Benavides told Clara Seminara after a complaint

Via Instagram, the famous conductor of cinescape attacked the government of peter castle for what happened last weekend at the refinery Repsol’s ‘La Pampilla’. “The oil spill on our coast of Ventanilla is frightening, it is much more serious than what they have shown us, they have tried to minimize the ecological impact of this fact”, he wrote in the first instance.

However, he later blamed the president for the disaster and assured that his main concern is to place “his people” in government. “But of course The only thing that matters to the man who is in the Government Palace is to place his people in ministries and entities. Where is the Government? There should already be a whole national and international deployment trying to fix this mess, but of course the pencil doesn’t give a damn. Painful to see people with dustpans and brooms trying to clean our beaches“, He said Bruno Pinasco.

These words cost the television host dearly as it quickly became a trend on Twitter and hundreds of people attacked him for not mentioning Repsol in his message, the main responsible for the oil spill.

LOOK: Sebastián explodes LIVE against Greg and tells him “ungrateful”: “He had nowhere to fall dead”

Realizing the criticism against him, Bruno Pinasco decided to edit his original post and mention Repsol as one of those responsible for the ecological disaster. In that sense, he asked the company to take responsibility for what happened.

“No one takes away Repsol’s responsibility, let all justice fall on him and answer for his negligence, but the Government of the day has to take action, use its logistics. Stop looking to the side. Ask for international help and do something please”, concluded the driver. 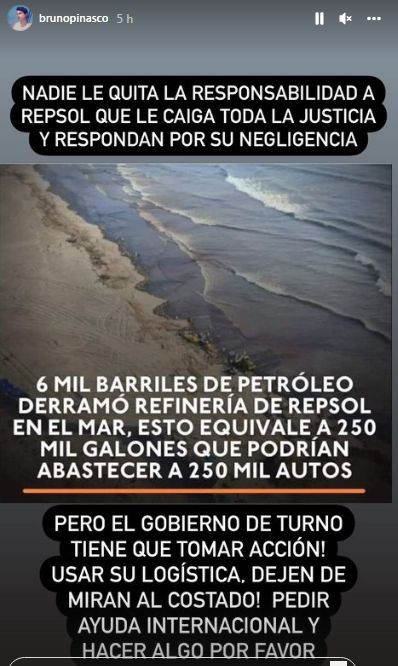 MORE THAN ONE MILLION SQUARE METERS AFFECTED AFTER SPILL

The head of the Agency for Environmental Assessment and Enforcement (OEFA), Miriam Alegría, revealed that The extension of the area affected by the oil spill at the La Pampilla refinery, operated by Repsol, is 1 million 739 thousand square meters.

In dialogue with Canal N, the official explained that this figure could increase over the days, so constant monitoring will be carried out to update it.

“We are talking about 1 million 739 thousand square meters, this can continue to spread, we are still in the process of permanent supervision, as we identify affected areas we will continue updating that information”, he expressed.

The official stated that Repsol It has a period of five business days, counted from Tuesday, to “carry out the actions to contain the supernatant oil in the sea and recover the crude that has been the subject of containment.” You will be granted other terms to carry out other actions.

“Tomorrow we are going to request a report from the company so that it can inform us how progress is being made in complying with our measures because we are not going to wait for the deadline to be able to verify whether they have actually complied with what has been indicated to them.”, said the head of the OEFA.

Greg Michel accuses Sebastián of keeping donation money: All about the fight between the former friends

‘Hablando Huevad…’: How much does it cost to go to one of your live shows at the Canout Theater?

Rodrigo squares Greg Michel LIVE after denouncing Sebastián: “You can’t trust us and leave your brother in a bad way”