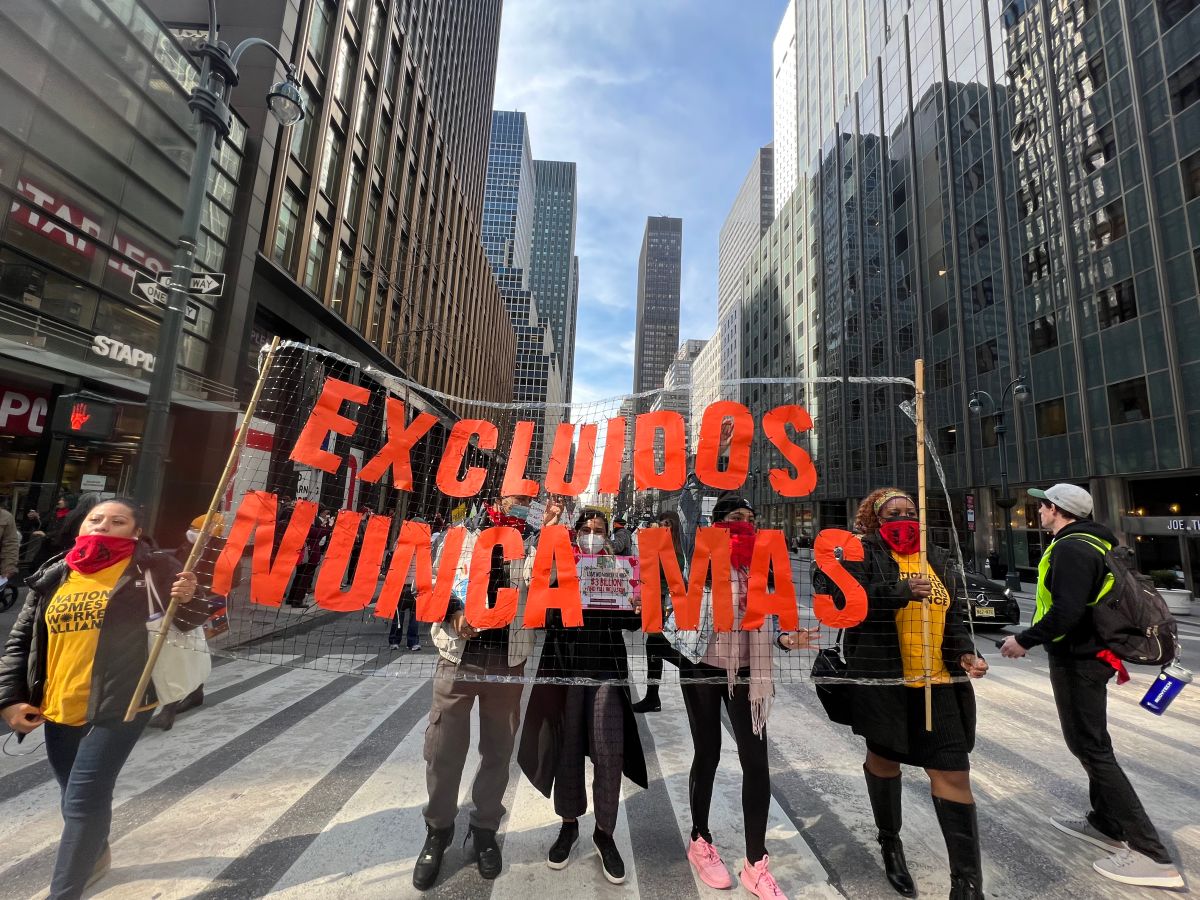 Missing two weeks to the deadline of April 1in which the New York State Legislature must approve the final budget for next fiscal year 2022-2023and both the State Assembly and Senate presented in detail the programs in which they will invest more than $226.4 billionwhere vital issues that immigrant communities and vulnerable groups have been claiming to deal with the ravages left by the COVID-19 pandemicwere included with large budget allocations.

The plans of legislature budget include more than Additional $10 billionregarding the proposal that the governor has been defending, Kathy Hochul since last January, $216.3 billion.

Rental support initiatives for families without income to stay in their homes, help with child care initiatives, the expansion of Pre-kindergarten for all, and support for more medical care and physical and mental health plans were contemplated in the so-called “single-house budget” proposals, which were introduced by each part of the Legislature, in a move that political leaders and immigrant groups have seen as a good gesture on Albany’s part.

However, the cry of invest $3 billion additions to the call Excluded Workers Fundwhich would grant financial aid of up to $15,6000 to thousands of undocumented workers who lost their jobs in the midst of the pandemic and did not receive any unemployment relief last year after the end of the resources, was conspicuous by its absence in the Senate plans and Assembly, as had already happened in the Governor’s plan, which has caused a stir in the working community.

“This budget proposal makes critical investments across the board to help us get back on track and ensure our families are healthy and our communities remain strong,” Heastie said, noting that the Assembly’s plan included $7.9 billion more that of The governorwhich is equivalent to a 3.6% increase in resources.

The Chair of the House Ways and Means Committee, Helen Weinstein, He assured that the elaborated plan is the product of the commitment of the Democratic majority in the Legislature to invest in the communities.

“This budget makes those investments, including critical funding for our schools, to help small businesses keep their doors open, help New Yorkers stay in their homes, and ensure New Yorkers get the health and mental health services they need. they need,” said the political leader.

about housing, the Assembly highlighted that in its budget it is a priority to help combat homelessness and ensure that more New Yorkers with financial problems do not lose their homes. For this, the investment of $1,250 million is included for the Emergency Rental Assistance Program (ERAP, payment of rent arrears); $500 million for a utility arrears program, to be administered by the Public Utility Commission, and $400 million for the Homeowner Rental Assistance Program (LRAP).

Additionally, an additional $250 million will be used to reinstate the Housing Access Voucher Program (HVAP) to help individuals and families who are homeless or at risk of becoming homeless and $500 million for capital repairs to NYCHA buildings.

The plan also allocates $1.7 billion to the affordable housing capital plan over five years, for a total of $6.2 billion and $1.35 billion to fund a new homeownership program.
The Assembly’s health budget includes a new allocation of $345 million for coverage for undocumented immigrants under the Essential Plan and an additional $1 billion for the safety net ($750 million) and major public hospitals ($250 million).

the assemblywoman Jessica Gonzalez-Rojas noted that the Legislature has included in its budget urgent needs such as health care, which will benefit thousands of uninsured immigrants, increased wages for homecare workers, and additional funding for the Emergency Rental Assistance Program (ERAP). ).

“If we’ve learned anything in the last two years, it’s that health care is an intersectional issue that we need to look at holistically. Providing food and rental assistance is part of New Yorkers’ health care. Increasing the wages of our frontline workers and the staffing of social workers in our school districts is critical to improving the well-being of low-income communities and communities of color,” said the Queens legislator.
“It is very exciting that we are supporting the expansion of health care coverage for undocumented immigrants and the provision of Medicaid coverage for undocumented people who give birth for a year after giving birth.”

The Assembly budget also allocates more than $3 billion for child care$30.9 billion in funds for General Support for Public Schools and $150 million for Universal Pre-Kindergarten.

They also highlight the importance of promoting fair pay for workers in New York’s mental health and hygiene sectors, with permanent raises to help retain them and grow the workforce.

As for small business support, the budget includes a second round of $25 million for the Restaurant Resiliency Grant program to help them get back on their feet.

On the Senate side, the majority leader, Andrea Stewart Cousins, He noted that the union’s single-chamber budget makes “historic investments” in New Yorkers, on issues like affordable and universal child care and increased access to education.

“With this resolution, we are advancing policies to strengthen public safety and protect our communities by investing in mental health resources, gun violence prevention programs, and the social services our communities deserve. Our single-house resolution speaks to our commitment to boosting the economy, investing in affordable housing, supporting our small businesses, providing tax relief to working and middle-class New Yorkers while protecting the climate and promoting social fairness.” said the political leader.

“The majority of the Senate will continue to work diligently with our partners in government in the coming weeks to pass a balanced and timely budget that meets the most pressing needs of New Yorkers and makes smart investments for our collective future,” added the Senate President. .

On Regarding child care, one of the issues of greatest concern to the immigrant community, the State Senate is earmarking $5 million in additional support for the Advantage Afterschool program, for a total of $33 million, an additional $625 million for fair pay for homecare workers, and $200 million for the Small Business Seed Financing Grants Program.

Regarding the housing item, the Senate includes $500 million more for the New York City Housing Authority (NYCHA), which gives NYCHA access to $1.25 billion; $150 million for the Housing for Our Neighbors with Dignity Act (HONDA), an additional $25 million for the Affordable Housing Corporation for a total of $51 million.

“Since Governor Hochul released her Executive Budget in January, our job in the Legislature has been to get everyone on the same page about what a just recovery means in practice. There are promising victories in the budget of a single chamber of the Senate, measures that I have been defending, ”said Senator Jessica Ramos, chair of the Labor Committee.

The Ombudsman, Jumaane Williamshighlighted the willingness of the State Assembly and Senate to include funding for critical programs for New York’s neediest and most vulnerable communities, and urged Governor Hochul to support it, despite being far above of the investment that she proposed in the preliminary budget.

“I am pleased to see the Assembly and Senate present stronger proposals to the Governor’s lackluster executive budget to better address the important needs of working New Yorkers, with additional investments in housing, health care, higher education, and more, than the Governor must adopt,” assured the official, warning that more initiatives are still needed to help thousands of New Yorkers get out of the crisis left by the pandemic.

“While one-time investments and actions are critical to alleviate a time of crisis, Albany must prioritize our long-term recovery by implementing common-sense revenue-raising measures that allow us to pay for programs and initiatives that will dramatically impact lives. of working families, Williams said. “Unfortunately, throughout the entire budget process, the Governor appears to protect wealthy donors and wealthy special interests.”

The Legal Aid Society For his part, he urged Albany to ensure that New York’s Fiscal Year 2023 Executive Budget includes at least $1 billion to replenish the Emergency Rental Assistance Program (ERAP), which ran out earlier this year. , since the federal government only announced the allocation of $119,204,649.

“This latest round of ERAP funding from the Biden Administration is drastically short of the statewide demand we are seeing from renters at risk of eviction,” said Judith Goldiner, attorney in charge of the Civil Law Reform Unit at The Legal Aid Society. “Given this development, Albany legislators need to ensure that the FY23 budget includes at least $1 billion earmarked to replenish the ERAP fund. New York is facing a tidal wave of evictions, and Governor Hochul, Senate Majority Leader Steward-Cousins, Assembly Speaker Heastie and other lawmakers must make keeping families in their homes a priority.”

Despite the budget allocation that both chambers are allocating to health, housing and wage protection plans for workers and child care, the big budget mole, according to immigrant advocates, it remains the exclusion in the budget, of the additional $3,000 million of the Excluded Workers Fund.

For this reason, from this Tuesday until March 23, dozens of immigrants, activists and community leaders began a march from the New York Governor’s Office in Manhattan to Albany to pressure the Legislature to disburse the resources they are demanding.

“We’re asking Governor Hochul to do the right thing and approve an additional $3 billion for the Disenfranchised Workers Fund to help more than 75,000 workers who have been disenfranchised. That’s not right,” said councilwoman and former assemblywoman Carmen de la Rosa, promoter of the Fund. “You said your leadership was different, now we want you to show it and endorse these resources, because you made a commitment not to keep us in the dark, and we shouldn’t have to walk 150 miles for you to listen to us and do what you need to do.”

Mexican Maria Sierrawho will be on the walk to Albany, asked the Governor and the state Legislature not to delay with the inclusion of the $3,000 million in the Fund for Excluded Workers.

“I ask you for a favor, no, not a favor, we demand that you support us by approving that money because many workers were left without receiving help and that is an act of injustice that you, Madam Governor, should not allow,” said the mother of the family. .

The Governor’s Office He has not responded directly on whether the Governor is willing to move forward on the inclusion of the requested resources, but they assured that she remains committed to helping “immigrant communities and vulnerable New Yorkers.”

Data on the budgets proposed by the Legislature