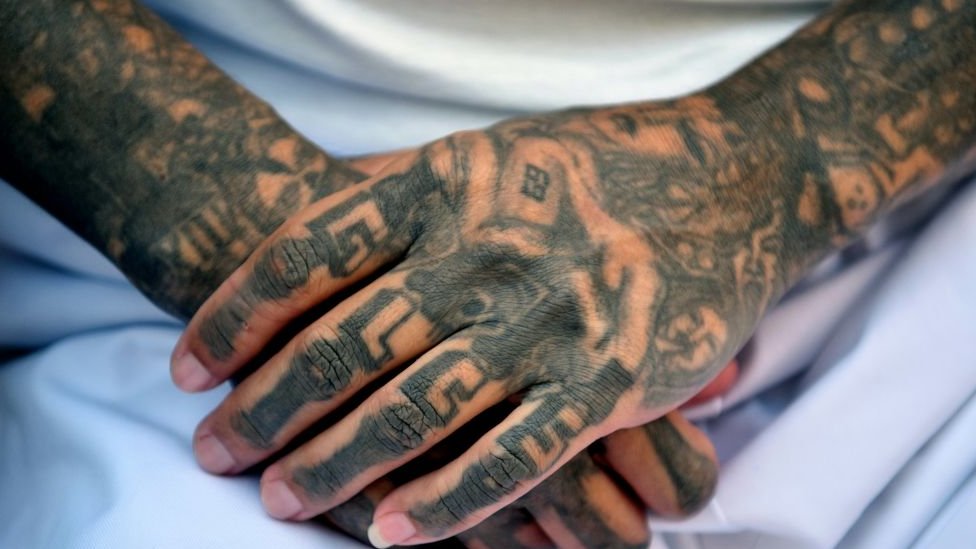 “Smiley” is hidden in some corner of western Salvador. His freedom has been threatened since the dawn of March 27, the Congress of El Salvador decreed the emergency regime in the country as part of what President Nayib Bukele calls “war” against the gangs.

“Smiley”, a nickname to protect his identity, claims to be a former gang member, but he hides from the police and the army because he has the initials of the Mara Salvatrucha (MS13), one of the country’s gangs, tattooed on him.

That’s all enough now to go to jail in El Salvador.

The exceptional measure requested by President Bukele after a wave of murders suspends the right to defense, freedom of association, the inviolability of correspondence and allows the intervention of communications without a court order as well as the arrest of any person up to 15 days.

Given the complaints of police excesses and the imposition of arrest quotas, Bukele estimated at a maximum of one one% detainees who may be innocent.

“Smiley” stopped being an active member of the MS13 11 years ago, when he was deported from Los Angeles, the gang’s place of origin, although the gang tattoos remain on his skin.

In the United States, he served six years in prison. When he returned to El Salvador he did not like the way his gang operated and preferred to “live in peace,” he now assures BBC Mundo from his cell phone.

Until three weeks ago he sold popsicles on the street, but now he doesn’t go out to work anymore. “I’m locked up, I don’t even know how to do it sometimes. I don’t have to walk like this, if I don’t owe anything”, he says sadly.

“I have a DUI (official document), license, everything in order. I owe nothing. I don’t live off any of that from the neighborhood (gang). I work”, he maintains irritated. “Just for having the letters (M and S tattooed),” he says of the fear of being arrested.

From plane to prison

Genaro Godoy Monterrosa, known as “Satán”, had no time to hide. On April 8, the charter flight in which he was deported from the United States arrived at around 11:00 in El Salvador from the state of Louisiana.

His mother was on her way to the airport when Godoy wrote to her from an unknown cell phone and told her not to pick him up. She explained that he was riding a bus on his way to the Migrant Assistance Directorate, known as “La Chacra”, a center used only for returnees by land. He has not been heard from again.

His family does not know where he is imprisoned or what he is being formally accused of. His sister, Ana, assures that Godoy had been away from the MS13 for some time, that he earned his living between masonry and the remittances sent from Los Angeles.

The crime that Godoy committed when he illegally crossed into the United States last November was automatically transformed into belonging to illegal groups as soon as he landed in El Salvador. According to the new Penal Code, now reformed in the framework of the “war” against the gangs, that could cost up to 30 years in prison.

Although there are numerous former gang members who have already paid for their crimes in US prisons and who decided to leave their past there, their tattoos and police records are marks that cannot be erased in this exceptional regime.

According to complaints from human rights organizations and family members, the Salvadoran government has violated the presumption of innocence with its media and massive arrests, which, according to the National Civil Police (PNC), add up to 13,000 “terrorists.”

In these arrests, which are disseminated in videos and photographs through official government accounts, Darwin Cecilio Martínez Hernández, among others, was shown on the night of Wednesday, March 30, subdued and on his knees.

The word “mara” (gang member) tattooed across his entire chest was the only evidence the PNC had to arrest him, his family denounces.

That afternoon his wife, Angélica, was sweeping the house when the police showed up. It was around 6:30 pm and Martinez left his computer to attend to the agents, who asked him if he had gang-related tattoos.

He said yes and immediately showed his Criminal Record Certificate for July 2021, to which BBC Mundo had access and which reads that “he does not have a current police record or pending processes.” He also showed them a letter from the Skycom company stating that he has been working as a telemarketer since last October.

Martínez said that he had left the Mara Salvatrucha thousands of kilometers away, back in California, and that now she only dedicated herself to working and taking care of her children.

The police called the offices to corroborate his record, but when they did not receive an answer, they preferred to take him away. The state of emergency also empowers the police to reserve the reason for the arrest.

Shortly after, they returned him home and spoke with the Ministry of Migration and Aliens to find out his status as an immigrant, says Martínez’s wife.

From the other end of the phone they said that everything was in order. The policemen insisted and began to inspect the house in search of weapons and drugs. His wife was careful not to plant any false evidence, so the agents decided to arrest him “just for the tattoos”the woman tells BBC Mundo.

When they were about to leave home, Martínez told his five-year-old son that he was going to work in the capital, that he would be back soon. But the boy did not believe him and shouted that he should not lie to him, that he knew that the policemen were taking him to prison.

And that’s what happened.

From the detention center, Martínez made a video call with his wife to notify her that he had just been accused of belonging to illegal groups, that he would soon be transferred to the Izalco prison in Phase I. His lawyer went to ask for information and was received with pepper spray, He says.

The past of “Joker”

Martinez was known on the streets of Rampart, in Los Angeles, as “Joker.”

He used to take drugs and hold up until he was arrested for robbery. At the California Rehabilitation Center he overcame his addiction and gave up his life in MS13 after his cell (gang) disappeared. in April 2018 was repatriated to Honduras, his country of origin, and at the request of his wife they went to live in the Salvadoran department of Sonsonate.

He decided to change his life, while his wife made the decision to give up the “American dream” to reunite with him and be with the family.

They were happy about his new job at the callcenter and because she, in addition to raising her children, made a few extra dollars selling beers at home. The remittances they received from the United States also added well-being to their new life and they felt satisfied.

But from the day Martínez was taken, things got worse. The economic support of the house has come to less, his wife has not even given time to treat andl colon cancer suffering and his children keep looking for their father in the work study of the house in the hope of finding him there.

Police returned to Matinez’s home a week later. This time wielding weapons and with the intention of arresting his wife for the simple fact of being his partner.

Angelica picked up the phone and dialed her lawyer. She wanted help.

“They came back and started pointing their guns at me and they said, ‘Who are you talking to?’ One of them tried to take my phone away from me. ‘Bicha, daughter of the great whore!’, He told me. ‘Do you think the fucking lawyer is going to defend you?’”.

Angélica says she has had to endure police harassment and insults on social media since her husband’s photo went viral. Her insults range from “rats” or “society vomit” to the desire that they apply the death penalty.

Salvadoran society is fed up with gang members and there are not a few citizens who, taking advantage of the context, these days have denounced to any person who is or appears to be.

That happened to Ricardo Stanley Hernández Tremiño, formerly known as “Zombie”. His sister thinks she knows that a neighbor betrayed him so that on the night of Wednesday, April 6, they would take him away with no more evidence than the “Eme Ese” tattoo on his stomach. A policeman confirmed the citizen’s complaint and still does not know of his whereabouts.

Hernández has been inactive in the MS13 for more than two decades, since he was expelled in 2001, and has no criminal record, says his relative.

Darwin Martínez’s hearing was held on Thursday, April 15, in the Specialized Court of Instruction C2 of Santa Ana behind closed doors. That day the judge, whose name was reserved but BBC Mundo was able to confirm that it is Desireé Marlene Murcia de Castillo, requested provisional arrest against him and 255 alleged members of the Mara Salvatrucha.

Martínez’s lawyer appeared to leave the evidence on the reintegration of her client and the absence of a record in the country, but the judge ruled that they were insufficient. “There are orders from above not to let anyone out”says the defender, who asks to remain anonymous.

According to the organization Human Rights Watch, since the state of emergency was decreed, various due process guarantees that have violated the human rights of Salvadorans have been suspended.

“Smiley”, the former gang member who remains locked up in his house, fears that the same thing will happen to him as to his former homeboys. From the little piece of space in which it is kept, he believes that this policy can be counterproductive for the government: “The town is going to turn around.”