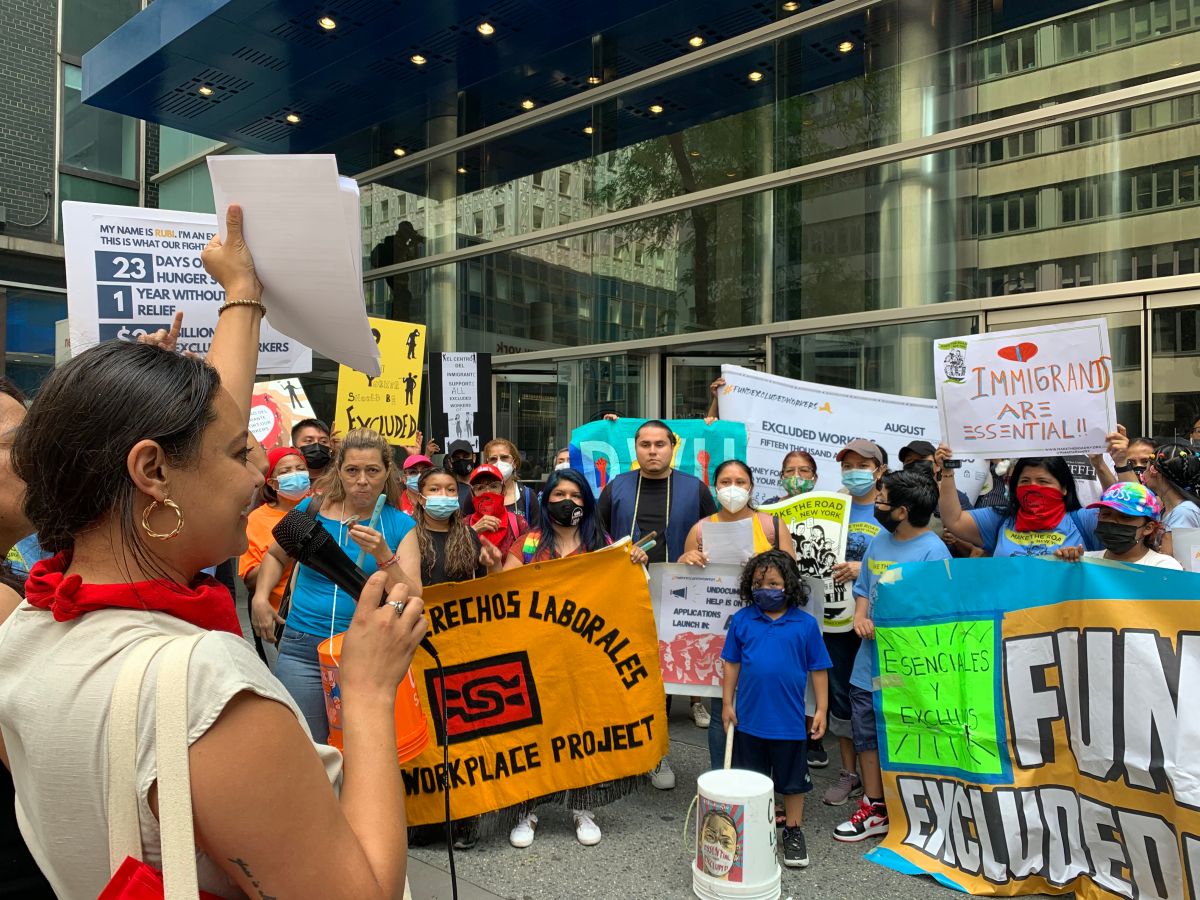 This year more than 130,000 undocumented workers scored a goal, after New York State approved checks for $ 15,200 with the Excluded Workers Fund (ERAP) for those who lost their jobs due to the COVID pandemic, and who due to their immigration status do not qualify to receive benefits from unemployment insurance.

And knowing that more than 50,000 immigrants who applied to the ERAP fund could not receive a single dollar, Because the $ 2.1 billion funds ran out, and thousands more did not even manage to apply for the aid, political leaders and worker advocates are promoting an initiative to create a program of permanent unemployment insurance for immigrants lose their jobs.

Under the “no more excluded” campaign, The promoters of the measure, which seeks to be approved in the Legislature in Albany next 2022, assure that the plan will do justice to workers who earn cash wages, as well as those self-employed with low wages and undocumented workers. The first year will require a state investment of $ 800 million.

At the same time they asked the State of New York to pay An additional $ 3 billion for him Excluded Workers Fund and to be able to give the benefit to those who could not receive anything.

The proposed undocumented unemployment insurance would allow any undocumented New Yorker to earn below the state median individual income (currently $ 56,000) and that you work at least 20 weeks in the 12 months before losing your job, you can access benefits. Workers who receive cash wages, such as domestic workers and day laborers, may also qualify, as may self-employed workers such as street vendors or house painters. For this category, applicants must win less than 80% of average earnings (currently $ 45,000 a year).

Bianca guerrero, Coordinator of the Excluded Workers Fund Coalition, He assured that the initiative only seeks to do justice to thousands of workers who, due to their immigration status, when they lose their jobs, despite paying taxes, are left without any protection.

“When times get tough, workers should be able to access the safety net support they need to survive, regardless of their immigration status or the type of work they do,” the activist said. “So in the next budget cycle, we ask Governor Hochul and state legislators to permanently fix the holes in our safety net so that unemployment insurance is accessible to those who need it most.”

The move is expected to help some 50,000 workers excluded each month and to apply, the same guidelines of the current unemployment insurance for people with papers would be followed, where applicants must prove the loss of job. The benefit would be for a maximum of up to six months, with the average rate for unemployment insurance, currently set at $ 1,200 per month.

The State Senator Jessica Ramos, The architect of the approval of the Excluded Workers Fund this year, defended the need for this extension of unemployment benefits to be done permanently.

“Just nine weeks after the Excluded Workers Fund opened applications this year, all funds had been allocated. That should tell us how much New Yorkers needed this program and how essential it was to the workers who keep this city running, ”said the Queens legislator. “We shouldn’t have to fight to establish another fund next time or our state will face a crisis.”

The Assemblyman Karines Reyes, Promoter of the initiative, added that approving unemployment insurance for undocumented immigrants will not only help undocumented workers and their families, but will also make communities stronger and better able to face their moments of crisis.

“The more we take care of ourselves, the easier it will be to recover when times get tough. We must learn the lessons of the pandemic and ensure that our safety net covers those who need it most, ”the policy said.

Details of the unemployment insurance project for the undocumented