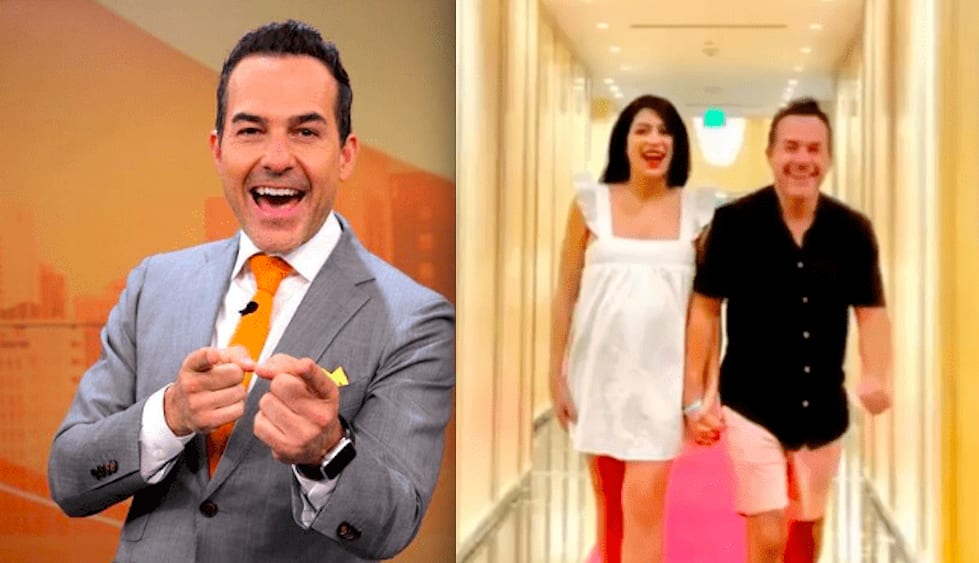 After a hasty pregnancy that was announced late in the 7 months, Carlitos Calderón already had his baby and his fiancee Vanessa Lyon gave him the strongest happiness that a man can receive, however, the driver of Despierta América was the object of harsh criticism.

“As you heard on @despiertamerica our baby was born super healthy and very well behaved. He has not cried, he smiles a lot and is very active. @_vanessalyon has been a warrior mom who I admire and thank for her incredible pregnancy. We are very touched with all your messages of love. Thank you for being part of our family, ”posted the proud new dad.

Carlitos Calderón already had his baby

Carlitos Calderón had been in ‘the eye of the hurricane’ after learning that he was infected with coronavirus after a party in honor of his baby where his fiancé Vanessa Lyon had also been infected, so people called them irresponsible.

After saying absolutely nothing about his state of health, weeks after catching and overcoming COVID, he recounted the strong experience he had in the hospital when they went for a medical check-up, because he was about to hit the blows thanks to a nurse that he wanted to admit his wife.

Just a few weeks ago, Carlitos Calderón told that they did very badly with the coronavirus due to the symptoms of his partner Vanessa Lyon, who was pregnant with COVID and he also had to take care of him, however, she felt quite exhausted and delicate, so much so that they wanted to intern her.

The driver of Despierta América prevented his wife from being admitted and almost went to the blows with a nurse who insisted but he had to make her his ‘doctor’ at home and protect her from all the symptoms she had due to COVID, however, Everything was in a fright and now they welcomed their baby, but people realized something that left them outraged.

Carlitos Calderón presents his baby without showing his face

Through his Instagram account and reproduced by that of ‘Despierta América’, Carlitos Calderón presented his baby in a tender photo where he is sitting with the little one in his arms wrapped in a blanket with a blue beret but without looking at his face of the child, similar case in another photo with his beautiful mother Vanessa Lyon.

People began to be outraged by the attitude of ‘mystery’ about the baby: “Congratulations but he did not show even half of his face”, “But what an old man you see”, “Congratulations but show him”, “Congratulations Carlitos, so fast It was born that you had it saved, God bless you always and he is guiding the growth of your child through you as parents “,” And allaaaa week talking about him now they have already let Francisca rest “”.

“Oh my dear Carlitos !!! I can’t believe it… You are finally DAD !!! A thousand congratulations to both of you! @_vanessalyon What a blessing! And now the mere good of life begins my friend! I love!!! Kisses and a lot of love to that beautiful little boy ..! Vanessa, you are beautiful as a mom !!! ”

Carlitos Calderón had had difficult moments before having his baby

“It was horrible, horrible… there came a point where I just thanked God that I had COVID as well because otherwise I would not have been able to take care of her and I would have had to be separated and that would have killed me, in fact one day I almost got beaten with those in the emergency room … ”, assured Carlitos Calderón, counting his weeks of coronavirus days after having his baby.

“… They almost wanted to kidnap her there, and I told them ‘no, what to kidnap or what, I’m leaving, goodbye’, so it was difficult but I raffled it, I was the nurse for two weeks, it was thick”, Carlitos Calderón commented between nervous laughs, remembering the heavy moments they went through.

Carlitos Calderón broke the silence about his contagion of coronavirus

Two days after the lack of Carlitos Calderón became evident in Despierta América, people were alarmed because shortly after having their baby, the driver and his girlfriend tested positive for coronavirus and although they are vaccinated, people were scared of the sudden announcement that they made in the morning without informing their health status.

As irresponsibility, several people crossed out the fact that in the midst of the new wave of the delta variant of COVID-19, several personalities are still relaxed in terms of protection measures, including Carlitos Calderón, whose girlfriend Vanessa made a baby shower, a possible place where both got infected.

Although it was not specified what was happening well with the driver of Despierta América, only that he would not appear in the picture for being infected with coronavirus, so he kept a strict quarantine period, the media also indicated that his fiancee Vanessa, who is days away from having her baby, she was also infected.

For how the morning shows are mounted advertising every aspect of the lives of their drivers, as happened with Francisca Lachapel, it raised suspicions that Carlitos Calderón did not appear at a distance, as transmitted by several colleagues, which suggested that he was not in good health .

Carlitos Calderón’s message after being absent from Despierta América, is your baby at risk?

Although Raúl González was in charge of giving the news about Carlitos Calderón and his contagion of coronavirus, the information on the state of health of the Despierta América driver was very brief, so it did not take more than a few hours for him to be affected by COVID, will try to calm everyone with a message.

When the news was released that Carlitos Calderón would have a baby, he and his girlfriend Vanessa affirmed that they were 8 months pregnant, so that at the latest at the end of the month or at the beginning of September, they would welcome their son, as Francisca Lachapel did weeks ago.

“Thank you for so much love and good wishes for me, Vanessa Lyon and our baby boy are fine and calm. We will go ahead first God and his prayers. Take care of yourselves very much! ”Was the message that Carlitos Calderón gave in a photograph on his Instagram where he appears with a thumb up and a blue bracelet alluding to his baby.

Followers of Despierta América reproach the contagion, thinking of their baby

When they received messages of support, also a lot of criticism because apparently, two weeks ago, Vanessa Lyon, Carlitos Calderon’s girlfriend held a big baby shower and apparently it was there that they got infected: “Leave those meetings, you see what happens especially for the baby. nor should they or receive anyone at the moment ”,“ Last year you took better care of yourself, I remember that you had masks for every day ”.

“With all due respect, they don’t understand that they have to take care of themselves, imagine all those who were with them at the baby shower”, “When should he lead by example… .. ??????? ….and works. On television …… ..? I don’t know what people think … ????? ”,“ Jacky, Borja and now Carlos all for being at youth awards parties and baby showers and they are the first to give advice that they don’t put into practice ”, people scolded.