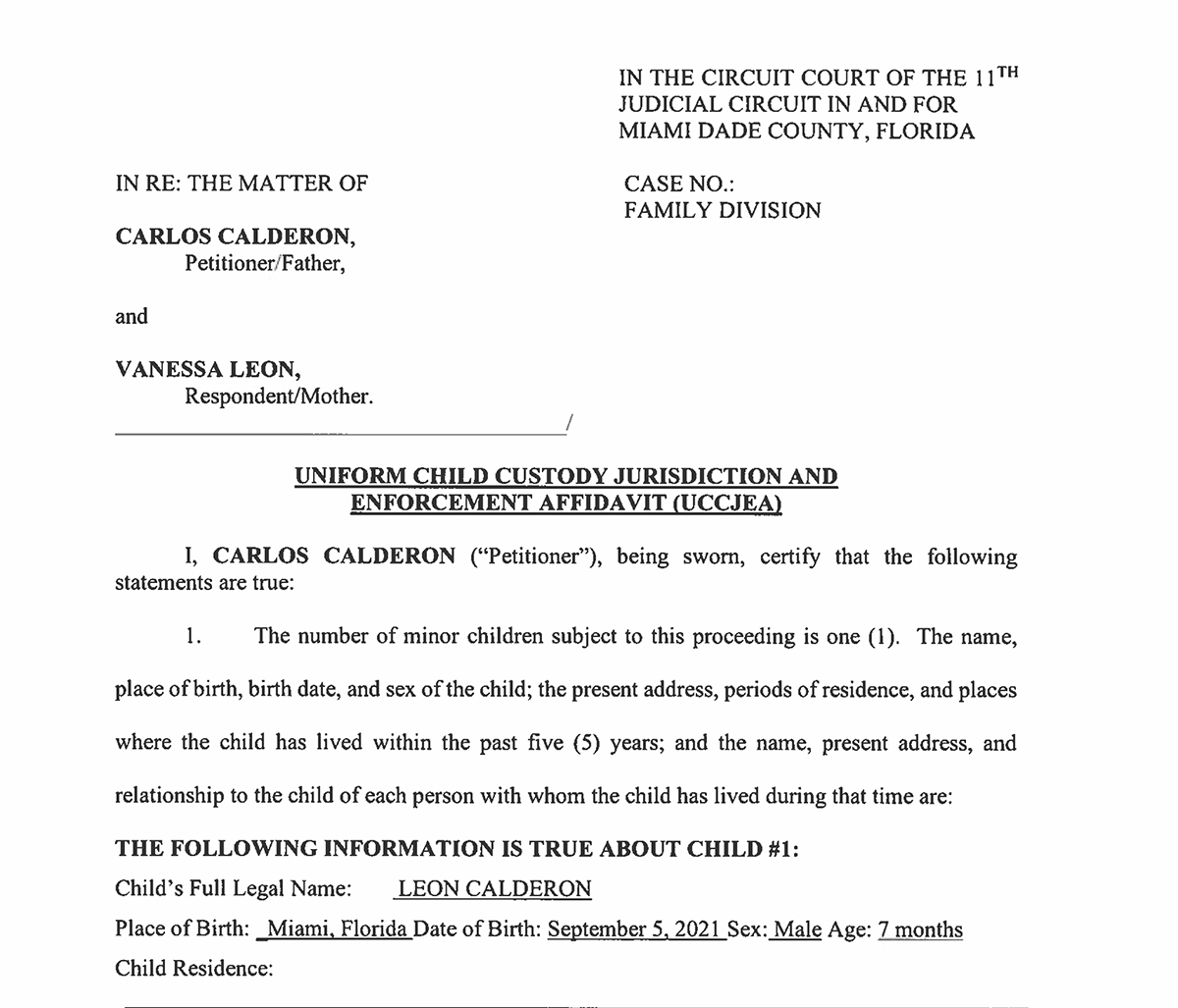 legal problems between Carlos Calderón and the mother of his son, Vanessa Lyon, bite and spread… In a detailed investigation, with their respective documents, we will tell you step by step the war between the presenter of ‘Despierta América’ and the Venezuelan-Mexican actress who has in her file her arrest for assault, the payment of bail to leave, a restraining order and the fight in court for her son, León.

After ‘Gossip No Like’ broke with the news on Monday, and we shared with you the current legal situation of the former couple, we took on the task of continuing to investigate, and discovered that Vanessa Lyon was detained and has a restraining order for alleged assault on Carlos Calderon.

But this story, at least the legal one, did not begin with the alleged assault reported, and here we will tell you step by step:

On April 21, 2022, Carlos Calderón requests in court an order or proof of paternity of his son León, case that 5 days later, through his lawyer Karen Lungarelli, he asks for a dissolution.

What did this legal step mean? Although we do not know for sure why he decided to remove this judicial step, we can tell you that, It is not that Calderón was necessarily doubting that León was his son, but quite the opposite, it is precisely to reaffirm it and to be able to have rights over the baby.

Why would I need to reaffirm it? Because in the state of Florida, where the couple resides and where Leon was born, single mothers, regardless of whether the baby’s father gave the child the surname, have absolute rights over their child, unless a judge decides otherwise for some type of crime or not finding the mother competent, among other reasons. Since they never married, although they lived together, Vanessa is a single mother.

This type of legal test, it would be the beginning of a request for parental authority or shared parental authority, establishment of child support and visitation regime. However, days later he dismissed the case.

Almost a month after that episode, on May 17, at 8:44 PM, Carlos Calderón makes a call to the police asking for help. According to the call, the presenter of ‘Wake up America’ he had been deprived of his liberty inside his house and was being physically and/or verbally assaulted by Vanessa.

The police show up at Calderón’s house, the one that until that moment they would have been sharing and Lyon is arrested on three charges: deprivation of liberty, assault and giving false identity. Bail was set for the actress and she left the next day after paying.

We learned from neighbors who witnessed the arrest that The moment the police arrived, Carlos Calderón asked the officers not to take Vanessa, who had already calmed down.either. However, when he made the call, the case ceases to be in the hands of the complainant, and becomes a state case, so it is the duty of the police to continue with the procedure.

However, almost a month later, the complaint was dismissed, Vanessa Lyon’s three charges were dropped and the case was closed because Calderón would have decided not to proceed with the complaint.

The morning after the episode of alleged violence that ended with the arrest of Vanessa Lyon, Carlos Calderón files a civil lawsuit for domestic violence against the actress in Miami family court.

The judge in charge of it gave rise to the lawsuit and immediately proceeded to enforce the restraining order by which Vanessa cannot approach, have communication or any approach of any kind to Calderón. This restriction was renewed three times, the last extension was made until September 30.

Given this demand, two court cases are opened, both civil: that of domestic violence that has a court date for August 10, and that of parental authority, custody, dates of visits and maintenance of León.

However, extrajudicially, the parties would be trying to reach an agreement. Unofficially we learned that Calderón’s team of lawyers would have prepared a document that would have been presented to Lyon, where they would offer him a certain amount of monthly money for the expenses of the baby and housing, and set a shared visit regimen at 50% of the time to each. What would be the problem? That Vanessa, who moved to Miami to bet on this relationship, would like to return to Los Angeleswhere he previously resided, and where apparently would have more job opportunities, since at the moment she is unemployed.

Moving would imply not being able to fulfill this contract, on the one hand, and on the other Calderón does not have a daily relationship with their son, since he not only resides in Miami, but also hosts “Despierta América” ​​daily..

HOW IS THE FORMER COUPLE CURRENTLY:

People close to both parties assure us that both are living a nightmare. Calderon he goes to Univision every morning to do his job, but he stays isolated, He doesn’t talk to anyone, he spends it on his cell phone and just smiles at the camera. She lives in the same house they shared which she put up for sale.

In the case of Vanessa would still be a little more delicate well faces a lawsuit of violence which must respond, and could leave a judicial stain, dont have workfor which he depended financially mostly on the expenses of who until recently was his partner. Right now I would be living in a friend’s house with the baby.

What about Leon? Who does he live with? The baby shares daily with both parents. He lives with Vanessa, but spends a large part of the day with Calderón… what do they do if they have a restraining order and they can’t get close?… They have an assigned person they both trust who is in charge of transferring the baby from one to the other.

WHAT THEY BOTH SAY:

We tried to communicate with both Vanessa and Carlos. In the case of the actress, her manager told us that for the moment she was not going to give statements. While Calderón decided to respond publicly in an Instastory that says the following:

“I am going through an extremely painful situation. Out of respect, I will not talk about the mother of my son. We are working for the best future for him“.

We contacted Univision to have a reaction regarding the situation that one of his talents is experiencing, who also works in the most familiar show on the network, and They replied that they have nothing to comment on it.

Unofficially, we were able to find out that, Although both the legal department and the communications department are aware, they would have decided not to get involved in this personal matter, unless it has a course that compromises the image or policy of Univision.

THE UNOFFICIAL VERSION OF THIS RELATIONSHIP:

So far we have told you step by step the legal and personal part since this scandal broke out, but What led to this instance of a couple who were apparently so happy, so perfect, and just had a baby?

We find out in the most intimate environment of both, that there are not many, since they have kept the couple quite private, the problems between Vanessa and Carlos would have started from the beginning of the relationship, even at no time would they have thought of taking this to something more solid or starting a family. Nevertheless, with the news of the pregnancy, they would have decided to bet on forming a family.

They got engaged and took everything in a very mysterious way until, When they were 8 months pregnant, they shared with the world the surprising news that León was on his way.

However, this did not necessarily have them in a world of happiness, because as they tell us, with the advance of the pregnancy, the difference between the two would also have increased, the fights and the opposing opinions regarding the future upbringing of the baby.

What no one imagined is that that would end in this nightmare for both of us where no one wins, everyone loses, including the baby.

•Carlos Calderón finally shows the face of his mysterious baby