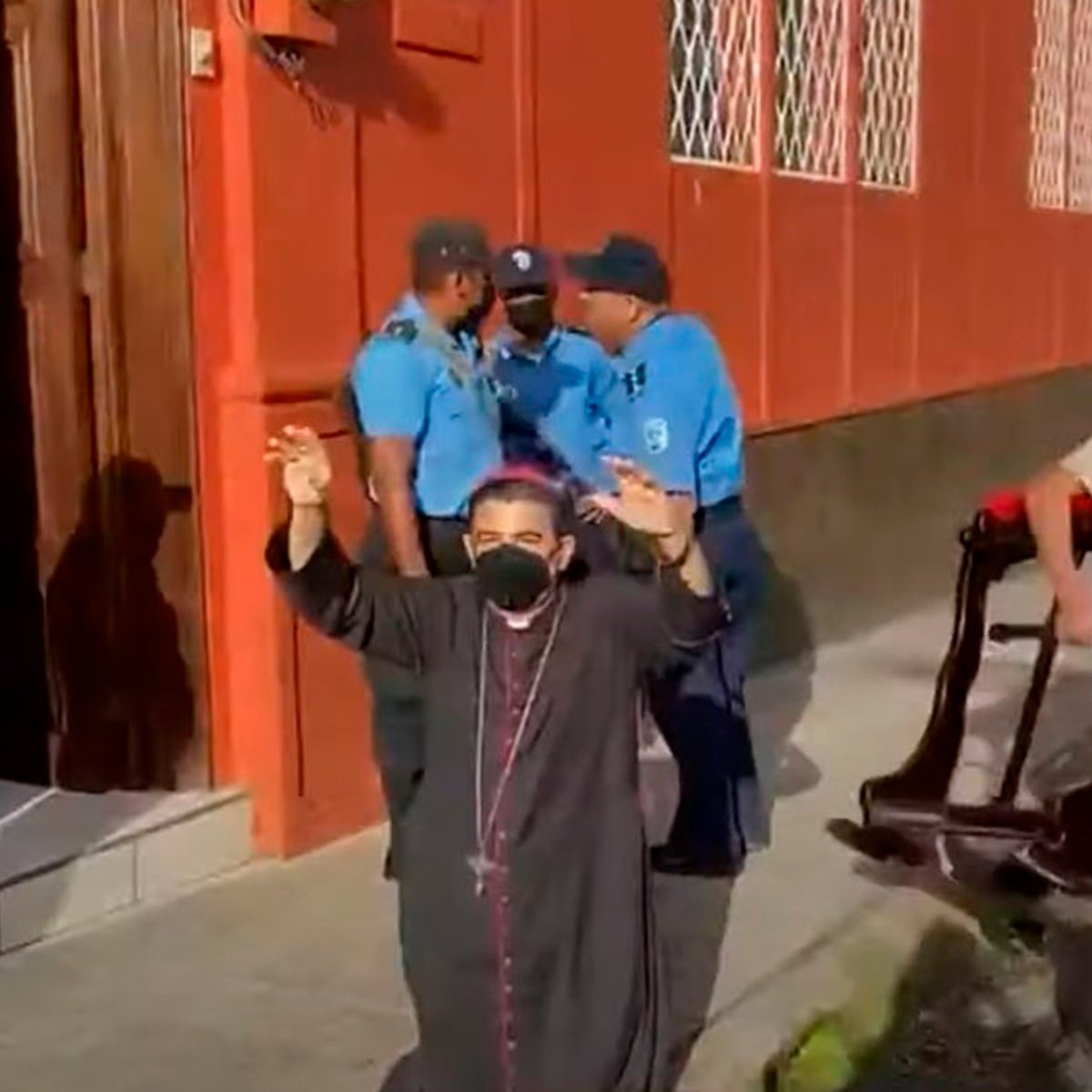 A bishop with house arrest, priests harassed by the police, expelled missionaries of charity and numerous restrictions on worship. This is the situation that the Catholic Church in Nicaragua under the current government Daniel Ortega.

This story begins in 1979, when -after the dictatorship of the Somoza dynasty- the first Sandinista government that led Nicaragua began until 1990. And 40 years later the hostilities and persecutions repeat themselves.

Members of the Clergy of the Diocese of Matagalpa, NicaraguaThey ask “the country’s authorities to respect freedom of expression and religion.”

Some international organizations such as the European Union, the Inter-American Commission on Human Rights and the Office of the Special Rapporteur for Freedom of Expression have joined this clamor from Nicaraguan priests.

In view of the events that have taken place these days, “we express our friendship, solidarity, closeness and communion to our Pastor Monsignor Rolando José Álvarez Lagos, Bishop of the Diocese of Matagalpa,” write the members of the Clergy of the Diocese of Matagalpa, Nicaragua , in a statement released through social networks, in which, “they urge the country’s authorities to respect freedom of expression and religion in our country”; likewise, the priests ask “for the persecution of the Church to cease”, and invite the people of God to continue praying for the Church, for the priests and for Nicaragua.

After the closure of the Radio Hermanos station of the Diocese of Matagalpa, on August 1, by the personnel of the Nicaraguan Institute of Telecommunications and Post of Nicaragua, who argued since January 20, 2003, the station does not have the title authorization to exercise this service.

For its part, the Church reported that during a meeting held with the executive president of Telcor, Bishop Rolando José Álvarez had personally presented the required documentation on June 7, 2016.

On August 5, “special agents of the Nicaraguan police prevented the Bishop of Matagalpa, Rolando José Álvarez, from leaving his own room to celebrate Mass,” as reported by the AGI/EFE agency, noting that “the The measure had been justified by the fact that the Catholic authorities in Nicaragua are engaged in a true crusade of sermons against the government, which in recent weeks has closed a series of stations and agencies related to the Catholic world.

The EU condemns the closure of radio stations

The European Union (EU) condemned the “arbitrary” closure of the stations and assured that it is “a new violation of freedom of expression and freedom of religion or belief.”

“The European Union condemns the arbitrary closure of seven Catholic radio stations by the Nicaraguan authorities on August 1, and of two other community radio and television stations shortly thereafter,” the EU said in a statement released by its office. in Managua.

The disposition of the president’s government Daniel Ortegathrough the Nicaraguan Institute of Telecommunications and Post Office (Telcor), the closure of eight Catholic stations, amid friction between the Executive and the Catholic Church, “constitutes another violation of freedom of expression and freedom of religion or belief “, continued the EU, after warning that “excessive police force was used to occupy the premises and to intimidate and disperse unarmed protesters with tear gas and gunfire.”

The EU recalled that “since 2018, the Nicaraguan government has unleashed unprecedented levels of violence against its own people, resorting to assassinations, enforced disappearances, imprisonment, harassment and intimidation against political opponents, journalists, human rights defenders, religious and other leaders. “. In this regard, the EU urged the Nicaraguan authorities to cease “all repression and restore full respect for all human rights”, and made an “urgent call on the Nicaraguan Government to immediately and unconditionally release all political prisoners and annul all legal proceedings against them, including their convictions”.

For its part, the Inter-American Commission on Human Rights (IACHR) and the Office of the Special Rapporteur for Freedom of Expression (RELE) condemned on Wednesday “the arbitrary closure” of seven Catholic radio stations in Nicaragua, as well as the violent entry of police into a parish, according to the EFE agency.

Through a tweet broadcast by this autonomous body of the OAS, they stated: “#IACHR and @RELE_IACHR condemn the arbitrary closure of 7 Catholic radio stations of the Diocese of Matagalpa in Nicaragua; and the violent entry of the Police into the Infant Jesus Chapel in Prague on August 1, from where they would have taken radio and television equipment.”

The IACHR and the RELE asked the State of Nicaragua “to cease the constant attacks against the Catholic Church” and “to refrain from using its powers in telecommunications as a measure to limit or prevent the circulation of information, ideas and opinions.”

The US criticizes Ortega’s ‘brutal attack’

For his part, the main person in charge of the US Department of State for Latin America, Brian Nichols, said in a tweet that “the brutal attack by Ortega-Murillo against the Catholic clergy, radio facilities and members of the community in (the municipality of) Sébaco is another blow to the freedoms of religion and expression in Nicaragua”.

He also recalled that the Police of Nicaragua entered the Divina Misericordia parish by force on Monday night in order to appropriate the equipment of one of the eight Catholic stations closed by the authorities.

The police agents kept that parish occupied and the priest Uriel Vallejos was being held in a bedroom, who, according to the Nicaraguan Center for Human Rights (Cenidh), had worsened his conditions.

The licenses of the private radio station Radio Vos, a community and feminist radio station, in the department (province) of Matagalpa, were also cancelled, and the television channel RB 3 “El Canal de la Zona Láctea” was taken off the air, in the same locality. , according to Telcor, because it did not have its authorization to operate.

Systematic attacks on the Catholic Church

Nicaragua has been experiencing a political and social crisis since April 2018, which has been accentuated after the controversial elections last November in which Daniel Ortega was re-elected for a fifth term, fourth consecutive and second along with his wife, Rosario Murillo, as vice president, with their main contenders in prison.

For some time now, the Ortega regime has taken repressive measures against the Church in Nicaragua, considered not aligned with power.

According to Fides, the following can be noted: the closure of the television channel of the Episcopal Conference; the withdrawal of the approval (agrément) of Archbishop Waldemar Stanislaw Sommertag, apostolic nuncio in Managua since 2018, and his departure from the country; Monsignor Leonardo Urbina, parish priest of Perpetuo Socorro in Boaco, was arrested for an alleged complaint of sexual abuse; Father Manuel Salvador García, parish priest of Nandaime, was imprisoned accused of exposing people to danger and for the alleged assault on a woman; the legal personality of 101 NGOs, including the “Missionaries of Charity” association, was annulled and the Sisters of Mother Teresa had to leave the country; Monsignor Rolando Álvarez, bishop of the diocese of Matagalpa and apostolic administrator of Estelí, as well as Father Harvy Padilla, parish priest of San Juan Bautista in the city of Masaya, “live in a climate of anxiety due to their personal security and the impossibility of exercising their right to live and celebrate their faith in an atmosphere of peace and freedom”.