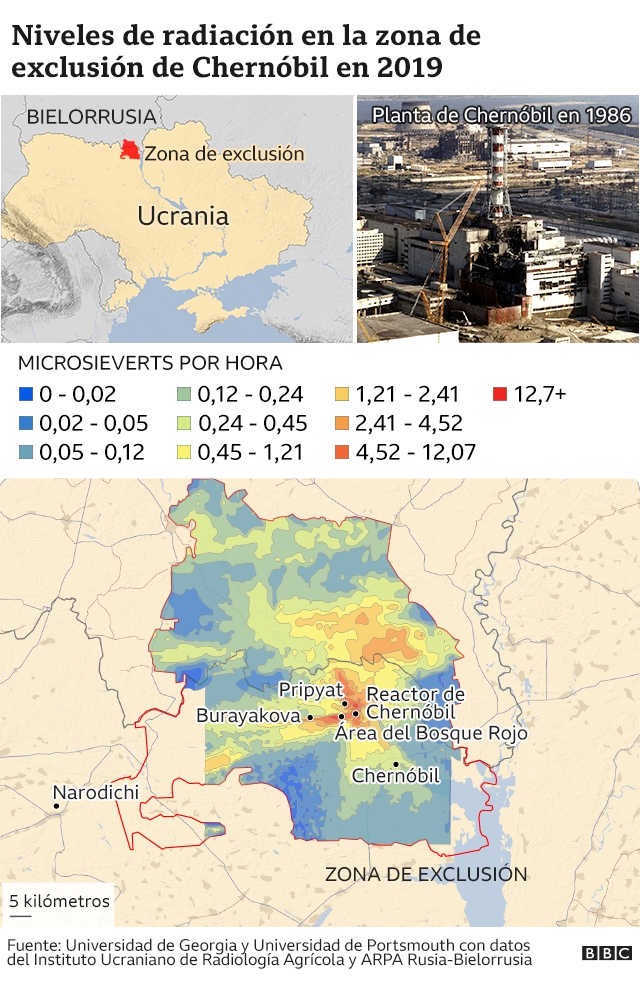 Chernobyl has recently experienced its most tense moments since the 1986 disaster.

Russian troops seized the plant and its surroundings at the end of February, at the start of the invasion of Ukraine, and the Ukrainians recaptured the territory a month later.

These events have once again put the spotlight on the plant where the worst nuclear catastrophe in history occurred.

The massive release of radioactive materials in the April 26, 1986 accident caused 56 direct deaths and at least another 4,000 among workers and local residents, according to estimates by the International Atomic Energy Agency (IAEA) and the World Health Organization ( WHO).

It also left a 30-kilometre radius around Pripyat, the city that houses the plant some 100 kilometers north of kyiv, virtually uninhabitable. It is the so-called exclusion zone.

The events of 1986, once covered up by the Soviet Union, have been widely documented in subsequent years and have reached the general public in a variety of formats, from reports to books to HBO’s hit 2019 miniseries.

Nevertheless, the chernobyl story after of the accident is less known.

The recent invasion of the Russian army highlighted something that many ignored: the nuclear power plant is not sealed and closed, but is still connected to the electricity grid and more than 2,000 workers work on it regularly.

In fact, after the 1986 accident in which reactor number 4 exploded, continued to produce electricity for nearly a decade and a half with the three remaining units.

This raises some questions about Chernobyl after the disaster, now in the midst of the conflict between Russia and Ukraine, and its future.

What happened at the plant in the years after the accident?

For 14 years and 7 months, first the USSR and then the Ukraine kept the facilities operational to guarantee the region’s electricity supply.

This worried neighboring countries, who feared a new accident in the Soviet RBMK-100 reactors, moderated with graphite, to which design flaws were attributed.

In fact, in 1991 the alarms went off when it burned a turbine of the reactor number twowhich led to the closure of the facility, while number 1 was closed five years later, in 1996.

After years of negotiations, Ukraine agreed with the G7 countries to deactivate the plant in exchange for 1,500 million euros in aid (about US$1,650 million) and on December 12, 2000, reactor number 3, the last in operation, it was definitely turned off.

As for the ill-fated reactor 4, which after the accident exposed more than 200 tons of radioactive materialsin the later months of 1986, it was hastily covered with a steel and concrete sarcophagus to prevent leaks.

But it was a temporary shell, hastily built to last a maximum of 30 years. Radioactivity, snowfall, rain and wind deteriorated it to the point that in 2013 one of the walls and part of the roof collapsed.

In 2016, after seven years of work, the so-called NSC (acronym in English for “new safe confinement”) was inaugurated, designed to contain the radioactive remains for a century.

How was the plant able to continue operating between 1986 and 2000?

It must be remembered that the Chernobyl plant is at the epicenter of the exclusion zone where all human activity was prohibited except working in the most dangerous place: the nuclear power plant.

“Although the radiation was high for current labor standards, it allowed the normal work of the operators without this being fatal for them,” Argentine nuclear engineer Aníbal Blanco, a researcher at the National Atomic Energy Commission (CNEA), explains to BBC Mundo. ) and specialized in the Chernobyl accident.

The expert points out, however, that “according to current international regulations regarding the radiological protection of workers in the nuclear area, today work would not be allowed in those conditions“.

Employees at the nuclear power plant during those years stayed at their posts for limited shifts and constantly measured their radiation exposure.

What happened after the closure and what work is being carried out at the plant?

Although it has not produced electricity since 2000, Chernobyl has not been able to be dismantled and requires constant management.

“All the people who operate in the Chernobyl nuclear power plant continue to work to eliminate the consequences of the 1986 disaster“Deputy Ihor Kryvosheyev, president of the committee for the repair of damages from the Chernobyl accident in the Ukrainian Parliament, tells BBC Mundo.

The plant, says Kryvosheyev, “now aims to ensure nuclear safety”, taking into account that within the confined reactor 4 fission reactions continue by the concentration of radioactive elements.

Some 2,400 employees are registered at the plant, from scientists and technicians to cooks, doctors, support staff and members of the national guard.

The former carry out several essential tasks, such as the relocation of atomic fuels or the maintenance of the sarcophagus and the facilities with radioactive waste.

These jobs require a constant flow of electricity.

The fear of a prolonged power outage: what would happen if this happened?

When Russian troops arrived in the Pripyat area on February 24, a power outage lasting several hours forced the use of emergency diesel generators, without causing any serious danger.

What would happen, however, if due to the conflict or another reason the current will be cut off various days, or weeks?

Aníbal Blanco warns that “this should not happen in any way in this type of facility.”

“In the worst scenario -of total power loss for several days- the water in the pools could evaporate, leaving the spent fuel elements (ECG) in the air”, he explains.

The exposure of such materials “would raise ambient radiation and could overheat the ECGs, which could crack and emit radioactive particles into the environment,” he says.

Kryvosheyev, for his part, believes the disaster could be bigger.

“If the electricity were to be cut for a long time, as the ventilation system of the NSC of reactor 4 does not work, it is likely that the radioactive dust exceeds the sarcophagus and spreads beyond the exclusion zone, polluting clean areas of Ukraine and Europe“.

What did the invasion and the stay of Russian troops?

The arrival of Russian troops at the end of February causeor a sudden strong increase in radiation levels in the zone.

This generated fears of a possible radioactive leak due to the impact of a projectile or explosive in the plant.

However, it was not because of that. The passage of troops and heavy vehicles in the first stage of the war raised dust in the exclusion zone, whose soil accumulates radioactive material.

“That radioactive dust in the environment set off the alarms in the detectors. Then, when the troops and vehicles were parked, it faded and the radiation levels dropped to previous levels,” says Blanco.

When Russian troops took Chernobyl about 200 workers were therewho remained held in the facilities for 25 days until being relieved on March 20.

They also held 169 members of the Ukrainian National Guard in the plant’s facilities and later took them to Russia as prisoners, according to kyiv authorities.

“They were taken hostage and held by force,” denounces the Ukrainian deputy.

Kryvosheyev accuses the Russian army of having used the exclusion zone “as a military base, to store explosives and ammunition”, something that, he considers, could have caused a nuclear accident with “terrible consequences for Europe and the entire planet”.

The Russian authorities, for their part, assured that they guaranteed the power supply of the plant and pointed to Ukraine as responsible for any incident that could happen there.

In any case, on April 1 Ukraine confirmed that it had regained control of the plant.

Energoatom, Ukraine’s state nuclear energy agency, claimed that Russian soldiers were exposed to “significant doses” of radiation during your stay of more than one month.

The plant will be completely dismantled around 2064. Why so long?

“In addition to the construction of the sarcophagus of reactor 4 and the maintenance of the places where radioactive waste and spent fuel from units 1 to 3 were deposited, there is also the transfer of these used fuels and then the progressive dismantling of the 3 units and of sites no longer used.

Kryvosheyev, for his part, assures that the year 2064 “it’s just a reference date“.

“Our scientists have created a plan with the steps to implement until that year and our state is willing to fund and implement those measures.”

In any case, he says, “the Chernobyl problem here to stay for millennia“.