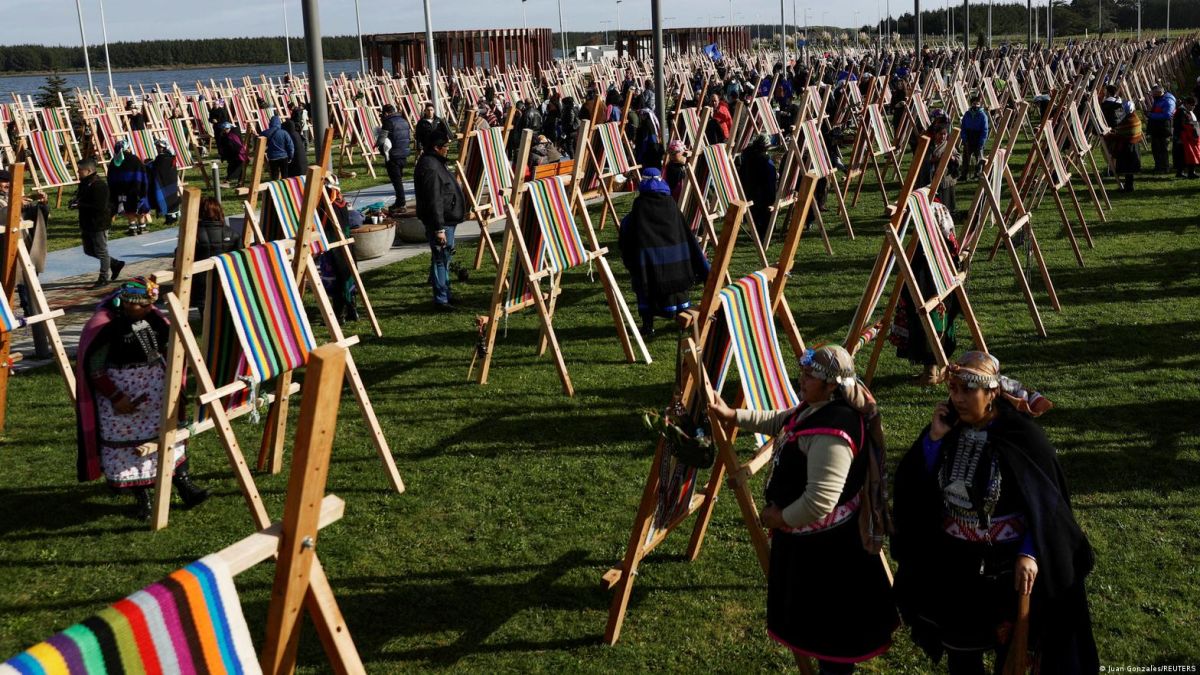 About half a thousand Mapuche women, dressed in their typical costumes, gathered this Saturday (05.21.2022) to break a world record in La Araucanía, in southern Chile: to make a fabric one kilometer long and 50 centimeters wide with the colors of relmurainbow in Mapudungun language.

A titanic effort that fell just a few hundred meters from its primary objective, but that did not mean a detriment for the 426 women who gathered in the coastal city of Puerto Saavedra in a festive atmosphere to also celebrate diversity and the cultural power of a people that has been involved in recent weeks in the controversy of the ancestral conflict that exists in the area with the Government and the large forestry companies, which reduce the ancient forests.

Shortly after dawn, after the llellipunthe traditional Mapuche opening prayer, the weavers placed their witrales (traditional looms) almost two and a half meters high and began to gather the longest fabric in the world in the coastal commune of Puerto Saavedra, 766 kilometers south of the capital. The previous record was held by some Chinese weavers who in 2017 made a fabric of almost 280 square meters.

“Lately in the world there have been many storms, a lot of pain, a lot of bloodshed… With this, what we intend is to show that a people can unite and deliver a bit of joy, of peace through these colors,” he explained to the agency Eph Patricia Huinca, of the Chilka Foundation and project coordinator.

For the feat, a ton of sheep wool of the Dohne Merino breed was used, which comes from Tierra del Fuego, in the extreme south of the American continent. “We have always woven inside our houses, locked up, nobody knew about our activity, about our fabrics, but today we are going to make ourselves known to the world,” added Huinca.

The wool was washed and dyed with natural materials to achieve the colors of the rainbow, which represent different values ​​of the Mapuche culture. Purple, for example, symbolizes che troki wün (respect for the person) and green, rekülüwüm (support for the other), while yellow refers to norchewün (acting righteously). “Most of the colors can be obtained from nature, but there are some that are difficult to find, such as royal blue,” said Nelly Calbulao, another Mapuche weaver.

The Mapuche people, who live mainly in La Araucanía and other southern areas, are the largest in Chile, where there are also nine other indigenous ethnic groups: Aymara, Diaguita, Quechua, Atacameño, Colla, Yagán, Kawésqar, Chango and Rapa Nui.

“This is a record for Mapuche women, for our strength, we have a lot nahuen (energy)”, concluded another of the participants, who preferred not to give her name.