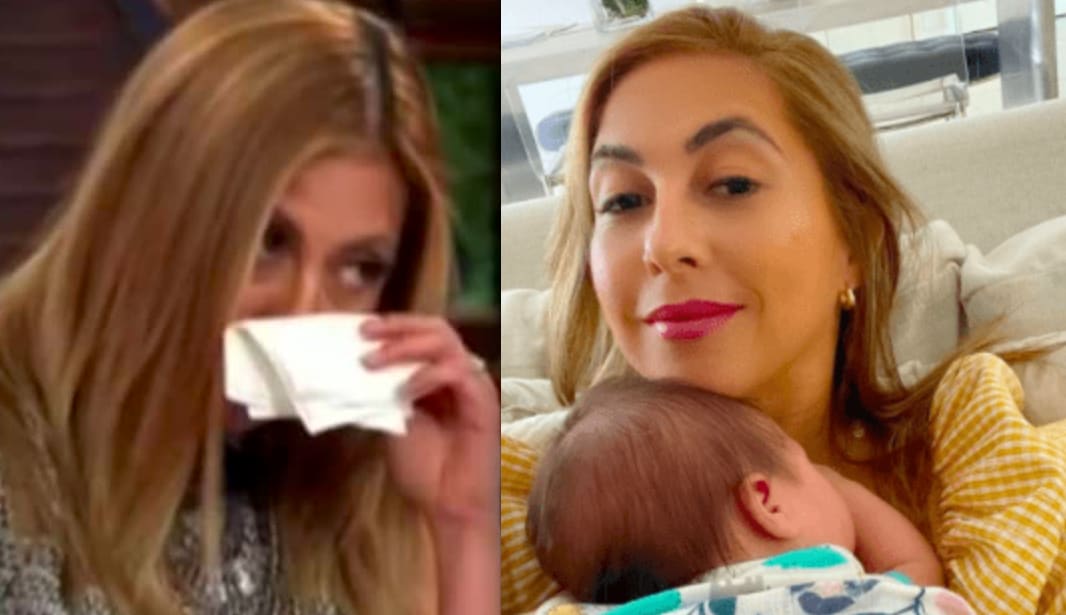 A few weeks ago, Chiquibaby had her baby and since then, the new mother dedicated herself to pouring her social networks into the little girl who has an angel and an impressive beauty, however in a recent photo session of which she shared a video , the host of ‘Hoy Día’, generated bad comments.

“Today our princess @ capriblu2021 celebrates a little month of having come to illuminate our days the house is another with her !! Yes, there are hours of insomnia, fatigue, and a lot of work, but NOTHING compares to the hours of happiness that this chulada has given us, We love you with all our soul and we celebrate you today and always my Capri !! Happy first month to the most beautiful little girl ”, she wrote in some photos of her baby a few days ago.

Do they make you ugly for what you dressed? Chiquibaby receives criticism

And it is that through his Instagram account and that of Hoy Día, Chiquibaby has given an open door for his fans and that they meet the beautiful and tender baby Capri Blu who has generated so much controversy over the name that the famous decided to give him, but now is he exposing it too much?

As Adamari López and Francisca Lachapel did with their offspring who already have Instagram accounts, Chiquibaby did the same with the baby Capri Blu and already documents everything about her daughter apart from her official social network, so the criticisms for the host appeared in a recent video.

Too exaggerated? Chiquibaby gets extravagant to hold her baby in a garden

Surrounded by a lot of vegetation in a large garden, dressed in an extravagant dress ‘in the style of MET GALA’ in pale pink with ruffles, crinoline and overflowing on all sides while posing seated carrying her baby, Chiquibaby showed off with a video for a session of photos.

However, everything was not well seen by people who without hesitation thought that he was overexposing his image and that of his little daughter too much, who, incidentally, was also mercilessly ravaged by the name that the parents decided to give him: Capri Blu, and some comments were cruel.

Cruel comments are taken by Chiquibaby and her baby

Through the Instagram of ‘Hoy Día’, the criticism for the video of Chiquibaby with her baby did not stop: “And the clowning continues. Poor girl, let her breathe from so many rags. Jesus was born in a manger without clothes. Leave the ego “,” It looks like a shower curtain! “,” What an ugly name for the baby “,” So many beautiful names for girls, parents give it that. God forbid when he grows up he can change his name. You do not understand!!!!!. Have a little more discretion ”.

“Wow if the babies spoke they said LET ME SLEEP CALM daughter we have to make money so smile for the PHOTOOO how many sessions does it take?”, “This lady does not feed her baby, too thin”, “It seems fifteen …” it went from brown to dark, congratulations Nati Natacha for teaching your super comfortable baby what a baby is like without so many rags, motherhood affected her a lot “, commented several people.

Is the baby poorly fed and overexposed? People consider it

And it is that since her little Capri Blu was born, Chiquibaby does not stop sharing all the moments that happen with her to such a degree that people are tired already? so much to that little one ”,“ Pure frivolity !! ”.

“Ridiculous”, “Always extravagant, as the saying goes ‘he who has never had and becomes crazy is going to return'”, “The beautiful girl … but the mother with those gestures that she makes looks so fictitious …. It looks so plastic “,” What a cute baby but does it have a dad? because he has never dated her in a photograph ”, they commented. HERE YOU CAN SEE THE VIDEO OF CHIQUIBABY WITH HER BABY

Chiquibaby is in love with her facet as a mother

Stephanie Himonidis’ baby, better known as Chiquibaby receives criticism after the Mexican presented her daughter Capri Blu to the public, however, something goes wrong and she ‘pays dearly’ for it on social networks, so her happiness was clouded by some comments from Internet users.

It was on the Hoy Día Instagram page that the driver showed her baby in a photograph when she was carrying her in her arms and immediately received all kinds of comments, but not all were positive, as some noticed something strange in the little girl.

Strong criticism for your baby’s name

And it is that what most attracted attention in a negative way, was the name that the entertainment reporter also gave him, so the ‘rain’ of criticism did not wait and they told him everything for that aspect and here we will show you all of them.

The following message was posted on the Hoy Día program page: “HERMOSAS. Both our niece and her mommy @chiquibabyla are in perfect health. In #hoyDia we have all the details ”.

One of the first personalities to write to him was Rashel Díaz, who very happily wrote the following comment: “@hoydia what a beautiful photo !!! My @chiquibabyla Congratulations and welcome @ capriblu2021 ”.

Another follower in a very courteous way decided to join in the joy of the famous and her companions and wrote the following: “Congratulations on this new stage of your life and the best blessing that our Lord can give us and the privilege of being blessed mothers.” Filed Under: Chiquibaby’s Baby

Chiquibaby’s baby: “HE DIDN’T LIKE THE NAME”, they tell him

But the criticism for the name did not take long to arrive and a follower did not hesitate to express her opinion on the page of the program in which Chquibaby participates: “Capri blu, what a horrible name, having so many more beautiful names it occurs to her to put capri blu”.

Then another person joined in the criticism for the baby’s name, which apparently did not like much, but no one doubted the beauty of the little girl and that was evident with the comments: “You would have looked for another name, the baby is very beautiful. ”. In 2019 he got injured on a dance show and recounted it. To see the video click here.

And congratulations also made their appearance, since the arrival of a baby always makes families happy: “Congratulations on the advent of this baby, God bless her, good health for her and for the parents. Kind regards from Caracas Venezuela ”.

Chqiuibaby has her baby and it is her most cherished wish

Before saying goodbye to the program to be able to focus 100 percent on the birth of her baby, the driver said she was very happy for this new process in her life and has finally become a mother and did not hesitate for a minute to express her love for the baby.

Weeks before, she had shared this phrase: “Being a mother was something I longed for for a long time and you who have accompanied me know it. Our Capri Blu is proof that dreams come true sooner or later! ”. Filed Under: Chiquibaby’s Baby