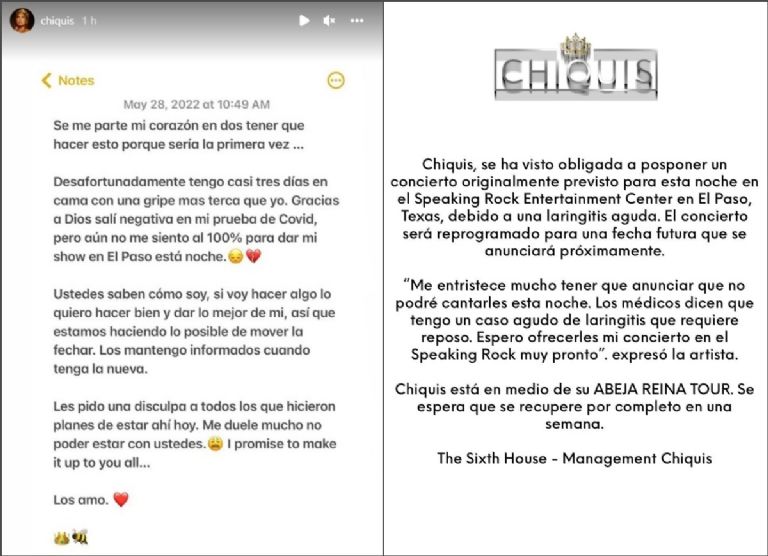 The daughter of the deceased regional music singer, Jenni Rivera, Chiquis, announced that, due to illness, the concert she would give in El Paso, Texas must be canceled, news that alerted her fans who wonder about her current state of health.

Just two weeks ago the interpreter of “Mi problema”, who is also the niece of the singer Lupillo Rivera, released her most recent album entitled “Abeja Reina”, and is currently giving a series of shows to promote the record material.

“It breaks my heart in two to have to do this because it would be the first time“ Chiquis wrote on her official Twitter and Instagram accounts, in a message in which she explained the situation she is going through, and took the opportunity to apologize to her fans.

The 36-year-old singer added in the words addressed to her followers, that unfortunately she has been in bed for three days with a flu for which he has presented some discomfort. “You know how I am, if I am going to do something I want to do it well and do my best, so we are doing our best to move the date. I will keep you informed when I have the new one” she wrote on his Instagram account.

“I apologize to everyone who made plans to be there today. It hurts me so much that I can’t be with you. I promise to make it up to you all (I promise to compensate them all)” ended the message with which she gave the news that has caused sadness for many, because they expected to see her at her concert.

“Thank God I came out negative in my Covid test, but I still don’t feel 100% to give my show in El Paso tonight” Chiquis explained on her social media accounts, while her team posted a statement on her Facebook account.

“Chiquis has been forced to postpone a concert originally scheduled for tonight at the Speaking Rock Entertainment Center in El Paso, Texas, due to acute laryngitis. The concert will be rescheduled for a future date to be announced soon.”

The daughter of “La Diva de la Banda”, said she was sad about the announcement, and indicated that it was the doctors who gave her the diagnosis of “acute case of laryngitis” therefore it requires rest. “I hope to offer you my concert at Speaking Rock very soon,” said the artist.