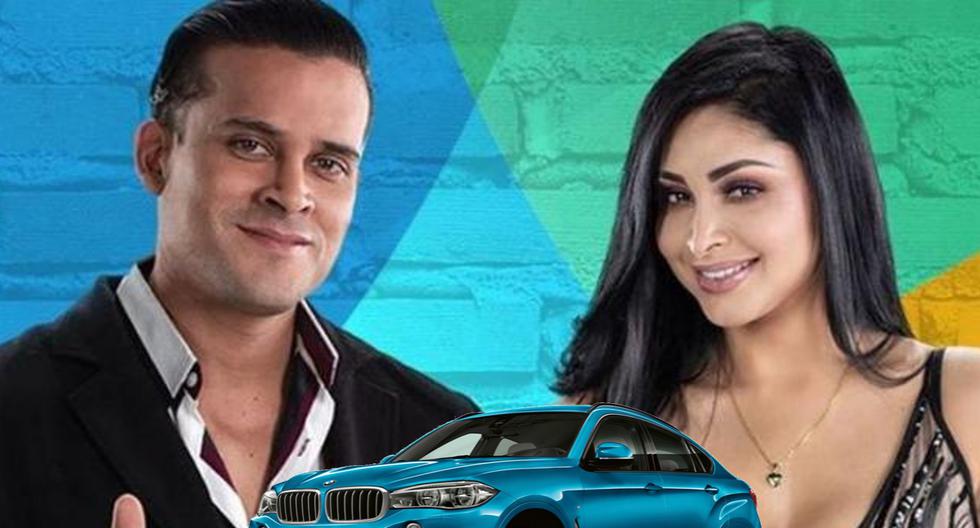 It was precisely at 3 in the morning that you see Christian Dominguez arrives at the disco and finds himself at the door with Pamela Franco, with whom he starts talking until he kisses her on the mouth, she touches him on the chest and then they both enter the ballplayers’ party.

However, Magaly Medina, after hearing the cumbia singer’s statements, did not hesitate to expose him as he revealed that Christian Domínguez went to the party with Pamela Franco aboard the truck that is in the name of Isabel Acevedo.

The “Urraca” showed the images of the vehicle and could not believe that the cumbiambero continues to deny the obvious.

Magaly Medina sent a dart to Christian Domínguez! Before broadcasting the ampay between the singer and Pamela Franco, the host began her program singing “Amigos no, por favor”.

The popular ‘Urraca’ maintained that although Christian Domínguez made it official that he had finished with Isabel Acevedo, better known in the entertainment world as ‘Chabelita’, he also revealed that the “rumors” that the singer had “taken his feet off the plate” they knew it long ago.

“He says no, he says they broke up, when? Yesterday? The rumors that you were taking your feet off the plate, do you think it’s from now? Nooooo! You’re not going to tell me stories”, concluded Magaly Medina.

To support her argument, Magaly Medina showed screenshots of the Instagram profiles of Christian Domínguez and Isabel Acevedo, where they both lavished messages of love until a few days ago. For example, on September 30, the cumbia singer commented with a “Q beautiful my beautiful (sic)” a publication of ‘Chabelita’ in which she wore a copy of the famous green Versace dress that Jennifer Lopez wore for the 42nd Grammy Awards ceremony on February 23, 2000 and that, as a curious fact, originated the birth of Google Images. But let’s not get off topic

In later days, on October 1 and 2 to be exact, other similar comments from Christian Dominguez are appreciated in the publications of Elizabeth Acevedo: “Take me pes… doll (sic)” and “Q rica mi bb (sic)”, respectively. But these expressions were not only from the cumbiambero, since “Chabelita” did the same when commenting on a photo of her now ex-partner in which she appeared bare-chested. “What a good photo amorr (sic)”, he wrote

“He who does not know his story is condemned to repeat it,” says an old adage that can be used to describe the current situation of Christian Domínguez, since it is not the first time that he has been in the eye of the storm for alleged infidelity . Now it was the turn of Isabel Acevedo, who was the third in discord in her previous relationship with Karla Tarazona.

But let’s go back in time a bit and see how the “red thread” began to unravel from the skein of Christian Domínguez’s love relationships. Tania Rios was the first on the list since the former dancer married the singer in 2002 when she was 28 years old. The civil ceremony was held in the Municipality of Breña and only in 2018, they finally divorced after 16 years of a legal union.

The next was Melanie Martínez, with whom he had a daughter as a result of his relationship that came to an end due to an alleged infidelity of the cumbiambero with the dancer Julissa Vásquez, known in the farandulero field as the ‘Tulita’.

Although initially Christian Dominguez He denied having anything to do with her. Melanie Martinez She said on television not to hide it anymore and, after this confrontation, the singer was photographed with her. But the happiness between the two would not last long since another well-known name of ‘Chollywood’ would come to carve.

After a time away from the cameras and ending his relationship with Julissa Vásquez, Christian Domínguez fell in love with another dancer: Vania Bludau, with whom he was very much in love on the set of the late reality show ‘Combate’. After a few years, the romance ended with a lawsuit by the cumbiambero towards the model, which the first won and the defendant had to pay a large sum of money.

Overcome the episode with Vania Bludau, Christian Domínguez was unofficially linked with the Bolivian Jeannine Gonzales but all that would be forgotten when he found love again in the figure of Karla Tarazona, with whom he found that peace that he longed for so much. Despite the fact that they could not marry due to the singer’s previous marriage, both performed a symbolic ceremony called “nuptial contract”, generating a wave of criticism since many thought that it was something armed and it was an advertising strategy.

After formalizing their relationship, the couple had a son, and happiness flooded the house of Christian Dominguez Y Karla Tarazona, but it all ended drastically when vania bludau He reappeared on the scene to unmask him and show messages and calls where he implied that he was looking for her. Despite these accusations, her then-partner stayed by her side until the two entered the dance reality show ‘El Gran Show’.

It was here that he entered to carve Elizabeth Acevedo, the dancer who was the trigger for the end of the relationship between Christian Dominguez Y Karla Tarazona. Despite the fact that both denied having anything, weeks after having separated from the mother of their son, the two confirmed their romance that would last two years and nine months until the appearance of Pamela Franco.

They were the brief statements of Isabel Acevedo, who was approached by the cameras of Magaly TV: La Firme after the end of her relationship with Christian Domínguez was known.

Isabel Acevedo broke her silence after her now ex-partner was supported by Pamela Franco in compromising situations recently. Prior to this, Christian Domínguez had announced the end of his romance of just over 2 years and 9 months with her.

Although she did not give many statements about it, Isabel Acevedo was emphatic in mentioning that she feels “liberated” now that she has ended her relationship with Christian Domínguez through two messages on social networks.