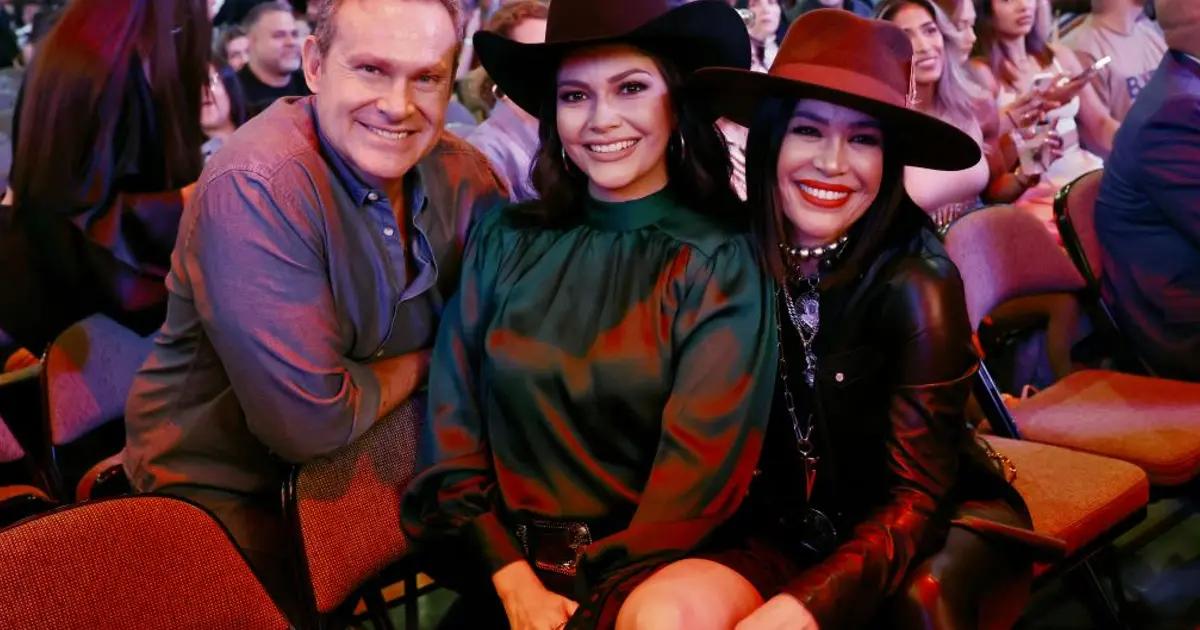 Nodal surprises Ana Patricia. Mexican artist Christian Nodal has acquired impressive fame in a few years because, in his short 23 years, he is considered one of the country’s most important interpreters of regional Mexican music. Now with his tour ‘Forajido,’ he has toured many corners of the world.

Yesterday we were surprised when Nodal decided to surprise the famous TV personality Ana Patricia Gamez, who was enjoying the singer’s songs. He decided to do the unexpected in the middle of the event when he realized that the ‘Enamorándonos’ host was there.

Nodal decides to “consent” to Ana Patricia in full concert

In the front row, Mexican model and presenter Ana Patricia Gámez sang and danced to Christian Nodal’s songs. The Mexican noticed that the beautiful model was “giving it all” on the dance floor and decided to do what many did not expect.

Through a video shared by Univisión Famosos, we could see how Ana Patricia recorded Belinda’s ex-boyfriend while he was singing. Still, as soon as he realized who the famous personality was, he decided to take his cell phone and start recording for himself.

He did the unexpected for the TV host.

While Nodal was recording his performance, he took a selfie with the beautiful Mexican model in the background wearing jeans, a black blouse, and, of course, the Mexican hat. Ana screamed in the background, excited about the occasion.

Later we can see how the singer of ‘Adiós Amor’ gives Ana back her cell phone, and she excitedly begins to scream along with her companions. The romantic moment was captured by many people, who surely wanted to be in the place of the lucky presenter. According to Milenio, the singer was also accompanied by Romeo Santos during his presentation in Miami at the FTX Arena.

Other television personalities accompanied her.

Originally, the presenter released the video and uploaded it as a post on her Instagram account with more than 2 million followers. Undoubtedly, Ana was the night’s special guest, but she was not alone in enjoying the show.

She was also accompanied by Alan Tacher, her sister-in-law Karla Martínez, Chef Yisus, and Jessy Rodríguez, who, like her, got very excited when Nodal stole their camera. However, the host was accompanied by the man who stole her heart, her husband, Luis Carlos Martínez.

Nodal surprises Ana Patricia: she declares ‘her love’ to Nodal!

Ana Patricia appeared dancing to Christian Nodal’s most famous songs, very close and giving each other all the love possible. The Mexican appeared with a norteño hat and a cool look to enjoy the great event.

“Here I share with you one of the best moments of my night. If it’s @Nodal with my cell phone, what if I sang? I still haven’t recovered the out-of-tune voice I have. We love you N O D A L up Sonora!” wrote the ‘Enamorándonos‘ hostess showing her love for the singer. Hours later, she published a video in which one of her shoes came off, and she assured everyone that she had a good time at the concert (SEE VIDEO).