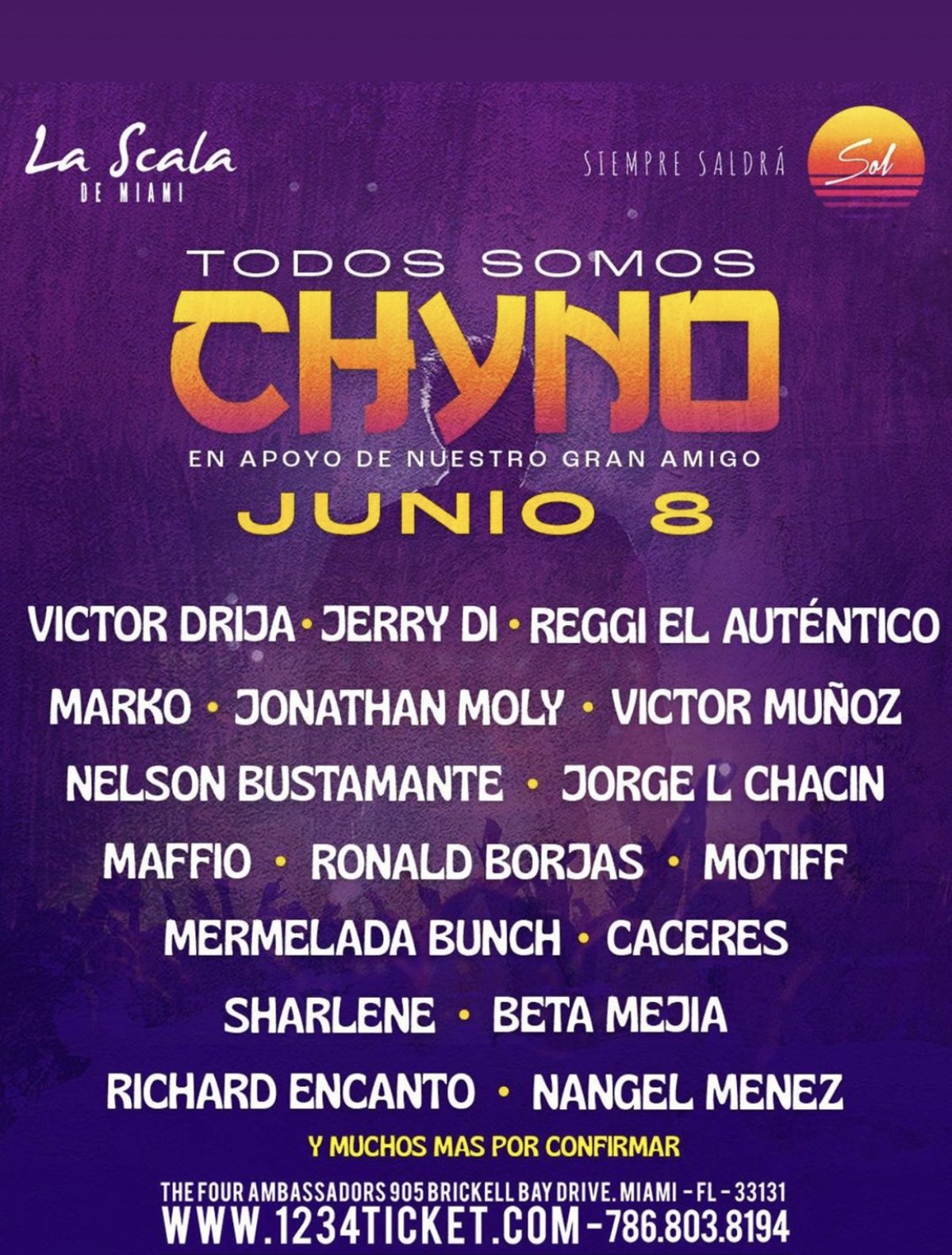 Months after his last appearance, Chyno Miranda breaks the silence with a video, and talks about the solidarity concert to pay for his treatmentsand shows how he is physically in the face of speculation about his deterioration.

Which? That they be part of the concert that is being organized in Miami, on June 8, at the La Scala theater, to raise funds to pay for the treatments that are being carried out in his native country.

Since it was announced that a festival would be held on June 8 to raise funds to help the Venezuelan singer, there were many doubts as to whether this was really for Chyno’s health, if he was aware, there were no visible faces of who and why they organized it, beyond the name of the Venezuelan artists confirmed up to that moment.

It was said that it was to pay a hospital debt that he had contracted in Miami when his health problem beganwhich would be managed by her cousin in Venezuela, whothat his manager Julio Ducharne and his ex-wife Natasha Araos were behind this…

Through his Youtube program, La Nave, Marko Music, who will be part of the artists that will participate that day, interviewed those whose faces we did not know until now, Jefferson, Richard Acosta and Nangel Menes.

Who are they? Three people from the media, producer, audiovisual entrepreneur, and actor, the organizers behind this initiative, but most importantly, the three friends from Chyno’s neighborhood who grew up with himwho were friends since childhood, and who followed the path of entertainment hand in hand.

They, until now they had not wanted their names to be known with the sole purpose of leaving the leading role to what they consider to be the star of this story: Chyno’s health funds.

But given the controversy and to avoid further speculation and put aside the confusion, they broke the silence, and Marko asked them those questions that we all asked ourselves:

Where and how is the Chyno?

“Chyno has been in Caracas since December, receiving medical treatment. yeshis progress is little by little, specialists are attending him, psychologists, therapists, neurologists are visiting him weekly… There is a team of professionals assembled from December to date in Venezuela with Chyno”.

Why was it decided to hold the festival?

“I had been thinking a little about the artists that we have, the Venezuelans, those who have more relevance and It is not a secret that Chyno and Nacho were the flag of VenezuelaI got a lot of information from Ray and Julio, who are Chyno’s representatives about his health, and I was interested in helping without protagonism. The idea of ​​us was not a leading role, but simply to help and that his friends help him being on stage“.

Are Chyno’s team and family okay with the event?

“They are very clear about what we are doing, in fact, the family gave us as a blessing, and their work team is supporting us“.

How will that money get to Chyno?

“Some tickets are going to be sold, there is a web page that is in charge, in this case Flamingo of having the resources. When Flamingo goes to write a check to pay, all that money goes directly to Jesús Miranda’s account, to his personal account in the United States, because his mother will have those resources for Chyno’s health, from today onwards. Entrepreneurs, great international singers, baseball players interested in donating have appeared, and they have already done so. All that money will be available to the mother.”

What does Nacho say?

“I contacted Nacho, as soon as the idea came up, and we told him: ‘we think it would be great if you were at the event’… He could not confirm me because he told me that he already had a commitment in the Dominican Republic, but I am in constant communication“.

The role of Chyno’s cousin?

“Ray, from Chyno’s team, from his resources has been paying for doctors, medicine, everything, and the money comes because Chyno is being treatedif it did not arrive, it would not be being attended. The cousin is the great protagonist, because she is carrying the burden of everything that is happening, she is 100% with him because it is a quite long and quite difficult process.“.

What does Chyno Miranda have?

After contracting COVID-19, the singer presented a cpicture of peripheral neuropathy, which affects the nerves that mixed with his normal state of anxiety would have him with motor problems, and speech, among other things.

What are the effects? can be experienced throbbing pain in the legs and arms, extreme sensitivity to touch, pain when doing activities that shouldn’t be painfullack of coordination, weakness, paralysis, fainting and intestinal problems among others.

So its cure will require many treatments, great patience and time, but above all money. For this reason, while for some there is doubt about this concert, more than anything because of the silence that there was until now, below you will be able to see the complete interview where you will see three friends, Jefferson, Richard and Nangel looking to help with whom they shared so much and who now you need them.

• Chyno Miranda: They hold a solidarity event to raise money for their health

•Daddy Yankee would have paid Chyno Miranda’s apartment rent, according to Venezuelan media

•Chain of prayer for the recovery of Chyno Miranda: the public fears for his health