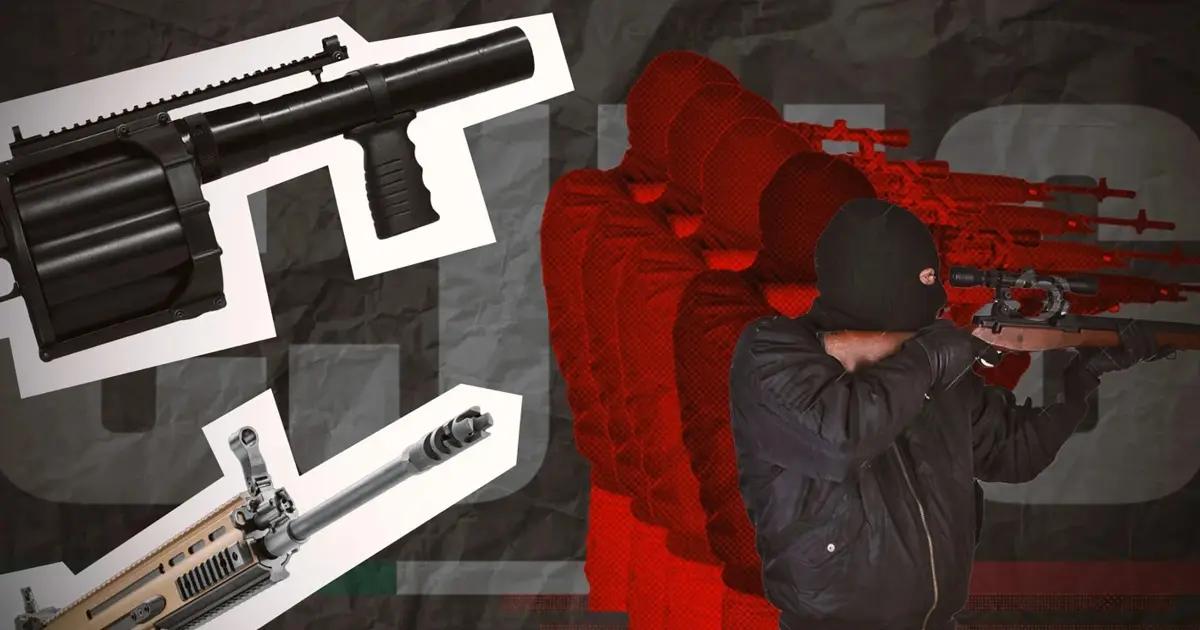 The Jalisco Cartel – New Generation (CJNG), whose expansion has been notorious in recent years, announced through a video that it was entering Morelos intending to confront multiple criminals and officials in the state.

As is usually the case when criminal groups announce their arrival in a given territory, the CJNG member who issued the threat said that he and his colleagues would not engage in practices such as extortion, extortion, and kidnapping.

In addition to references to specific characters such as Saul “N” El Lentes, who operates in Jojutla and Tlaquiltenango, or Homero Figueroa, La Tripa, of the Tlahuica Command, one of the aspects of the video that stood out the most was the powerful arsenal of the four-letter cartel.

Among the equipment shown in the video were at least two models of Special Forces Assault Rifles (SCAR), both manufactured by the Belgian company Fabrique Nationale d’Herstal (FN Herstal).

They are an FN SCAR 17S and an FN SCAR 16S. Although both share several characteristics, the former is noted within the arms industry for its high accuracy at long distances despite being a relatively light and small rifle.

In their menacing two-minute video, the CJNG gunmen also sport high-powered weapons such as machine guns that use 7.62 x 51 mm caliber bullets. This type of cartridge was developed between the 1950s and 1960s and was intended as the standard for long-barrelled weapons in North Atlantic Treaty Organization (NATO) countries. It was widely used in wars such as Vietnam, the Falklands, the Gulf War, and the 2003 Iraq war.

A Springfield Armory M60 and an M240-SLR from the manufacturer Ohio Ordnance (pictured below) are the machine guns carried by some of the hitmen of the Mencho cartel in their video, both produced in the United States.

Another CJNG weapon that uses the same cartridges, but works in semi-automatic mode, is the M2-SLR, also manufactured by Ohio Ordnance, which has an effective range of up to 1,800 meters and can reach a cadence, according to its official technical specifications, of up to 400 shots per minute.

On the other hand, as far as long-range weaponry is concerned, the cartel’s army boasted at least two models of Barret snipers: the M107A1 and the M82A1 antimaterial .50 caliber.

As an example of how these weapons work, an M82A1 was used by Los Chapitos hitmen in Sinaloa to attack an Air Force plane after the recapture of Ovidio Guzman, El Raton.

Mexican criminal groups have shown their preference for this sniper because of its long-range, around one kilometer, and effectiveness against targets such as radars and vehicles. A February 2022 video, presumably released by the CJNG in Zacatecas, had already exposed the availability of these snipers within the organization.

As if that were not enough, the high-powered weapons with which the four-letter cartel warned of its arrival in Morelos include grenade launchers such as the Colt M203 (developed during the Vietnam War) and the L540 from Penn Arms (USA). Both use 40 mm explosives, an exclusively military ammunition, which is what some of the hitmen in the video have hanging around their necks.

Weapons from Serbia will now be used in Morelos

One of the most striking elements of the arsenal exhibited in the recording was the Zastava M70 assault rifle. The peculiarity of this rifle is that it was designed in 1968, and in 1970 it began to be used by the Yugoslav People’s Army. Currently, the “Yugoslav AK,” as it is also known, is manufactured by the Zastava Arms company, the only producer of firearms in Serbia.

This is the second time weapons from this source have been seen as part of the Mexican cartels’ ballistic inventory. It is worth remembering that after the massive escape of inmates from the State Center for Social Reinsertion (Cereso) No. 3 in Ciudad Juarez, Chihuahua, federal forces found a Zastava M59/66 rifle hidden in the cell of Ernesto Alfredo Pinon de la Cruz, El Neto, leader of Los Mexicles.

According to what can be seen in the video, in addition to the Serbian rifle, the CJNG gunmen were carrying at least seven different models of assault rifles of different origins, from the United States to Romania (such as the F.A. Cugir AK-47 caliber 7.62).

Since the publication of the video and up to the time of writing, there have been no reports of violent actions or confrontations related to the CJNG. However, his message was a clear warning against criminal leaders who have been sought for years, some of whom have even been accused of having links to the political class, including Governor Cuauhtémoc Blanco.