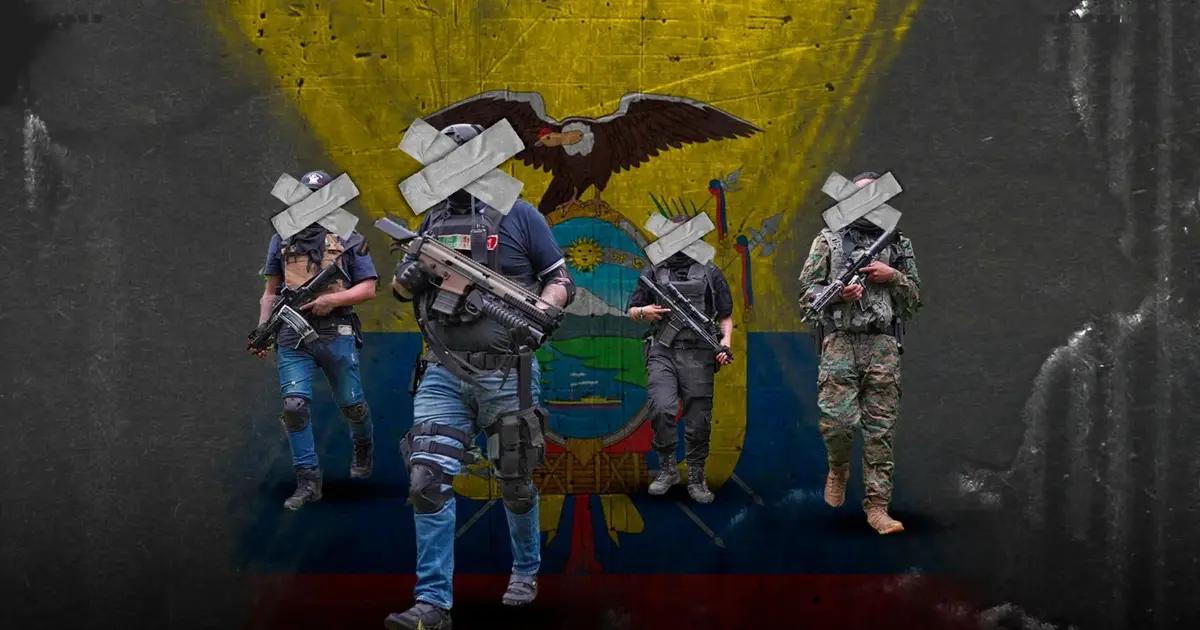 Recently, the violence in Ecuador has been blamed on gangs linked to the Jalisco Cartel – New Generation (CJNG), headed by Nemesio Ruben Oseguera Cervantes, El Mencho.

However, some videos recorded in different prisons in the South American country circulated over the weekend. Some cells linked to the Mexican four-letter cartel claimed responsibility for the recent attacks.

This is about the wave of attacks that began the night of October 31 and extended during the early hours of November 1 in the cities of Guayaquil and Esmeraldas. In the first days of the month alone, there have been at least 20 violent acts in police units, health centers, and gas stations.

After the first aggressions with weapons and explosives, communiqués apparently signed by Los Tiguerones and Los Lobos – cells of the CJNG in Ecuador – began to circulate in different parts of the cities, warning that “IF YOU COME TO TOUCH OUR PEOPLE IN HALLS 8 AND 9 OF THE PENITENTIARY OF THE LITORAL. KNOW THAT WE WILL USE ALL OUR LOGISTIC POWER, BEAUTIFUL ARMAMENT (sic.)”.

Given the threats and the risk to the population, President Guillermo Lasso decreed a state of emergency which, to date, continues in Guayas, Esmeraldas, and Santo Domingo, where the inhabitants live under curfew from 9:00 p.m. to 5:00 a.m. the following day.

However, according to recent statements by these criminal groups, the pamphlets and attacks were allegedly orchestrated by gangs under the protection of the Sinaloa Cartel (CDS from the Spanish “Cártel de Sinaloa”).

The unification of the CJNG and the incrimination orchestrated by the CDS.

Videos obtained and shared by journalist Karol Noroña, a specialist in Human Rights issues, revealed the peace agreement reached by the different cells attached to the CJNG to consolidate a union “for the tranquility of the country.”

From various prisons, gangs such as Los Lobos, Los Tiguerones, Los Lagartos, Mafia 18 Tiburones, and the Nación Latin King announced their alliance. They denied accusations that the CJNG was responsible for the violent attacks.

One of the materials shows at least 30 members of Los Tiguerones. With a “New Generation Cartel” insignia behind them, they pointed to Los Aguilas, which works under the command of Los Choneros, as the criminal faction responsible for the escalating violence.

“The war is not against the State, because we are subject to it,” mentioned one of the members of Los Tiguerones, who later assured that they do not recruit students or minors “under any threat.”

Reading a communiqué written jointly by the groups mentioned above, one of the members of Los Tiguerones explained: “the posters circulating in various cities are not of our authorship, nor Tiguerones, nor Lobos, nor Lagartos, nor Latin King nor Mafia 18 Pabellón 10“.

He also expressed that “we regret the intimidations against educational units, health centers, parks, UPC (Community Police Units) and the collegiate bodies of the above mentioned, that is the fault of Los Águilas and their armed wing in Esmeraldas, Los Gángsters, who want to incriminate us.”

According to local Ecuadorian press reports, Los Aguilas is a criminal gang no more than five years old that is aligned with Los Choneros and has a large presence in different wings of the Penitenciaría del Litoral (Litoral Penitentiary, the largest prison in Ecuador).

Relationship between Los Choneros and the Sinaloa Cartel

The Choneros is a criminal group that emerged in the 1990s in Chone, a town in Ecuador’s western province of Manabi, thanks to Jorge Busmarck Véliz España, alias Teniente España, identified as its founder.

By 2000, this criminal organization had already expanded its operations and had become the armed wing of a Colombian cartel with connections in Mexico and the United States. It was precisely at that time that the Sinaloa Cartel arrived in Ecuador, according to official reports.

One of the intermediaries of the CDS for its operations in the South American country was Cesar Fernandez, who even became governor of the province of Manabi. However, in 2003 he was arrested with almost half a ton of cocaine that he planned to move from Portoviejo to Mexico.

After his capture, former Ecuadorian army captain Telmo Castro Donoso, alias El Capi, became the main link to the CDS, as he had worked directly with Tomas Guzman, identified as the nephew of Joaquin El Chapo Guzman.

Castro Donoso became one of Ecuador’s most wanted drug traffickers. According to some testimonies gathered during the “Trial of the Century” against El Chapo in New York, military commanders like El Capi were key players in moving drugs from Colombia to Mexico via Ecuador, as they used military trucks to move cocaine, taking advantage of the fact that authorities did not usually search these units.

When El Capi was arrested in the early 2010s, Los Choneros were under the command of Jorge Luis Zambrano, alias Rasquiña. They were already fully in charge of drug trafficking operations for the Chapo Cartel.

Telmo Castro was admitted to the Litoral Penitentiary in 2013 and sentenced to a 13-year sentence for drug trafficking, which he did not fully serve, since he was murdered in his cell on December 3, 2019.

In recent years, with the arrival of the Mencho cartel in Ecuador to dispute control of drug trafficking, CDS and CJNG cells have been involved in some of the most violent episodes ever recorded in that country.

In 2021 alone, in February and September, two of the bloodiest prison riots in Ecuador took place, in which almost 200 prisoners were killed during clashes between Los Choneros and groups linked to the Jalisco cartel.