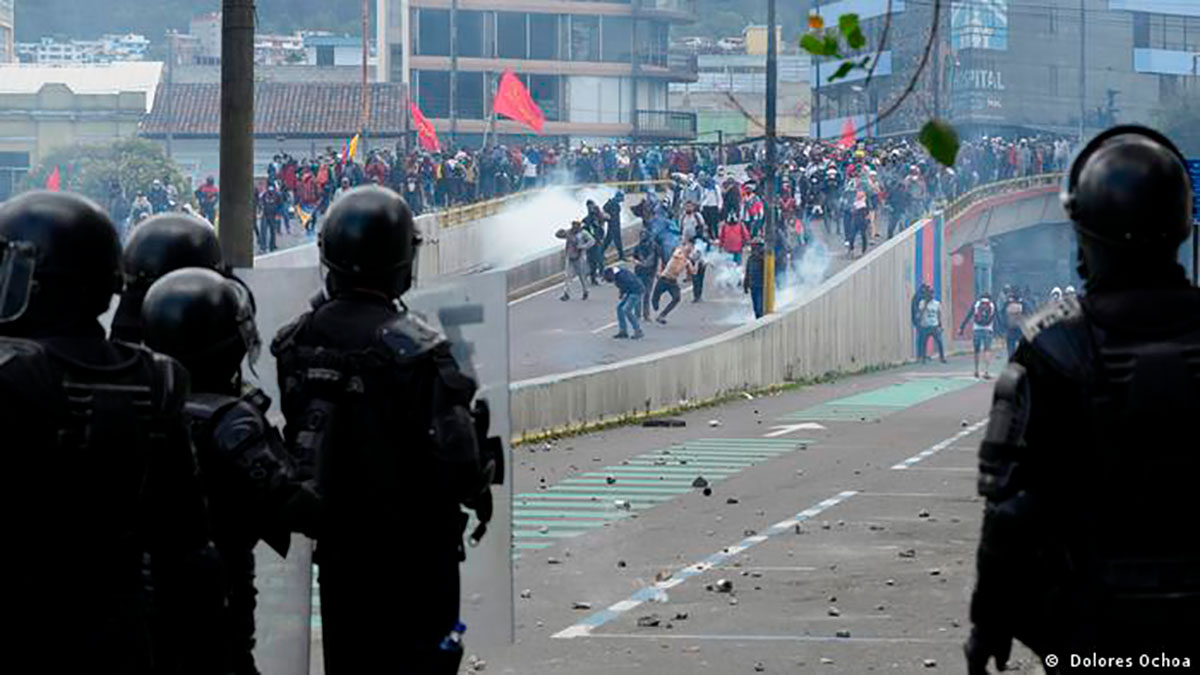 Carrying long wooden sticks and protected with handmade shields, some 10,000 indigenous people protested this Tuesday (06.21.2022) in various parts of Quito against the government of conservative Guillermo Lasso, with the balance in a deceased protester.

An Amazonian indigenous man died in a “confrontation” with the security forces, lawyer Lina María Espinosa, from the Alliance of Human Rights Organizations, told AFP. “A confrontation ensued and this person is shot in the face, apparently by a tear gas canister,” she said.

Riot units of the Ecuadorian Police attacked hundreds of indigenous people who had arrived at the campus of the Central (State) University of Quito during the night of Tuesday. The Police used abundant tear gas on the university campus, converted by its authorities into a reception center for peasants, especially women and children, and declared a “zone of peace.”

Meanwhile, very close to the Salesian University that houses the protesters, the biggest clashes with the riot police were concentrated early on the ninth day of indigenous protests to demand the reduction of fuel prices.

The agents, several on motorcycles and on horseback, tried to disperse the demonstrators with tear gas and water jets launched by anti-riot vehicles. The police presence was strong in the sector, where there is also the House of Ecuadorian Culture (CCE), which has traditionally been the meeting point for the indigenous people.

But this time the police installed their headquarters in this building surrounded by mirrors to control the protests called by the powerful Confederation of Indigenous Nationalities (Conaie).

There were also pockets of demonstrations in southern Quito and near the state-owned Central University (north), according to police.

The Alliance of Organizations for Human Rights reported 79 civilians detained and 55 injured since the start of the protests. The police in turn reported 79 wounded soldiers and another 27 held by protesters but later released.

After nine days of protests in various parts of the country that cut roads with tires engulfed in flames and affected oil production, Defense Minister Luis Lara said that “Ecuador’s democracy is at serious risk.”

The opposition Conaie participated in revolts that overthrew three presidents between 1997 and 2005.

The ECU911 Security Service estimated that some 10,000 protesters were in Quito, a city of three million people.

Six Ecuadorian provinces are under a state of emergency, through which the Executive mobilized the military and implemented a seven-hour night curfew.