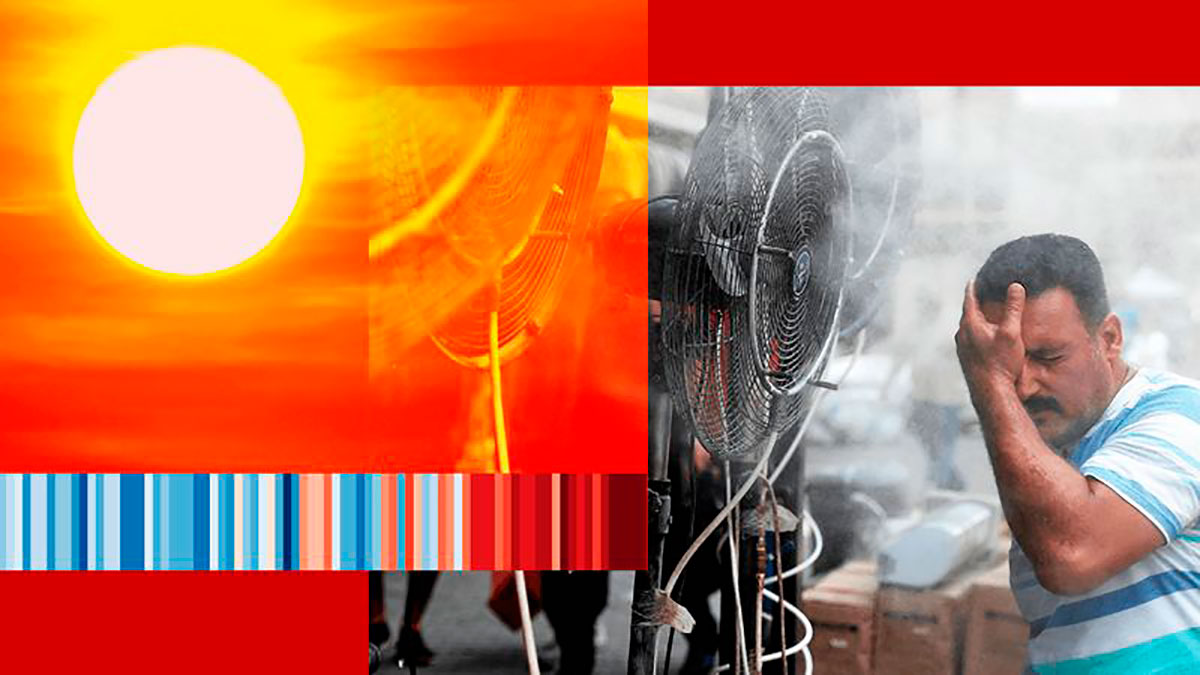 The number of days of extreme heat per year, when temperatures reach 50 degrees Celsius, have doubled since 1980, according to a BBC study.

Those temperatures are also being recorded in more and more areas of the world, posing an unprecedented challenge to our health and the way we live.

The total number of days above 50ºC increased in each of the past four decades.

In the same period, temperatures of 45 ° C or more were recorded on average an extra two weeks per year.

“The increase can be attributed 100% to the burning of fossil fuels,” says Dr. Friederike Otto, a leading climate scientist.

High temperatures can be deadly to humans and nature, and cause major problems in buildings, roads, and power systems.

Temperatures of 50 ° C occur predominantly in the Middle East and Gulf regions.

And after record temperatures of 48.8 ° C were recorded in Italy and 49.6 ° C in Canada this summer, scientists have warned that temperatures above 50 ° C will be experienced elsewhere unless we reduce emissions of fossil fuels.

“We need to act quickly. The faster we reduce our emissions, the better off we all are, ”says climate researcher Sihan Li.

“With continued emissions and inaction, these extreme heat events will not only become more severe and frequent, but the emergency response and recovery will be more demanding,” warns Dr. Li.

The BBC analysis also found that in the past decade, maximum temperatures increased 0,5 ° C compared to the longer-term average recorded between 1980 and 2009.

But these increases have not been felt equally around the world: in Eastern Europe, southern Africa and Brazil some maximum temperatures increased by more than 1 ° C, and parts of the Arctic and the Middle East saw increases of more than 2 ° C .

The scientists called for urgent action on world leaders who will meet at the UN climate summit in November, in which governments will be asked to commit to further emissions cuts to limit the rise in global temperature.

This BBC analysis includes a documentary series called Life at 50C (Life at 50º C) which investigates how extreme heat is affecting people around the world.

Even below 50 ° C, high temperatures and humidity can create serious health risks.

Until 1.2 billion people worldwide could face heat stress conditions by the year 2100 if current levels of global warming continue, according to a Rutgers University study published last year. That is at least four times more than those affected today.

People also face difficult decisions as the landscape around them changes, as extreme heat increases the likelihood of droughts and wildfires.

The land around him was once fertile enough to support him and his neighbors, but it has gradually become dry and barren.

“All this land was green, but all that is gone. Now it is a desert ”.

Almost all the people in his village have moved to look for work in other provinces.

“I lost my brother, my dear friends and loyal neighbors. They shared everything with me, even my laughs. Now nobody shares anything with me, I’m just face to face with this empty land. “

In my area the 50º C was exceeded, why doesn’t it appear?

Record temperature reports generally come from measurements taken at a particular weather station. But the data we have studied represents areas larger than those covered by a single station.

For example, Death Valley National Park in Southern California is one of the hottest places on Earth. Temperatures in certain parts of the park regularly exceed 50 ° C in summer.

But by creating an average of maximum temperatures for the wider area around it, using different sources, a figure is reached below 50 ° C.

From where come from the data?

The ERA5 combines meteorological observations from many sources, such as stations and satellites, with data from weather forecast models.

This process fills in the gaps left by poor coverage due to the lack of weather stations in many parts of the world.

What do we analyze?

Using the maximum temperature for every day from 1980 to 2020, we identified how often temperatures exceeded 50 ° C.

We count the number of days and locations with a maximum temperature of 50 ° C or more for each year to determine the trend over time.

We also observe the change in maximum temperatures. We did this by calculating the difference between the average maximum temperature over land and sea during the most recent decade (2010-2019) compared to the previous 30 years (1980-2009).

Averages for at least 30 consecutive years are known as climatologies. The 30-year climatologies are used to show how recent periods compare to a climatic average.

What do we understand by “place”?

Methodology developed with the support of Dr Sihan Li, University of Oxford School of Geography and Environment, and Dr Zeke Hausfather, Berkeley Earth and The Breakthrough Institute. External review of the European Center for Medium-Range Weather Forecasts (ECMWF). A special thanks to Professor Ed Hawkins from the University of Reading, as well as Professor Richard Betts and Dr John Caesar from the UK National Weather Service.

Weather stripe visualization courtesy of Professor Ed Hawkins and the University of Reading.