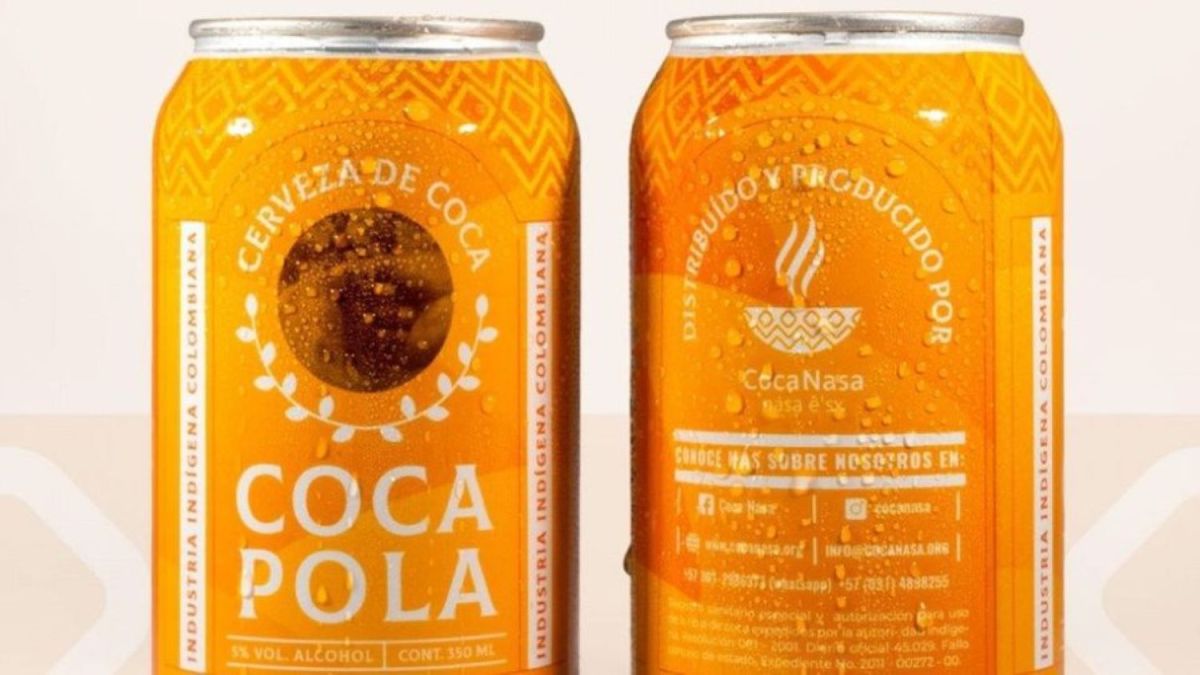 A soft drink, a beer, an energy drink, a brandy and even a rum.

These are some of the products made from the coca leaf that have come from Cauca, a Colombian region inhabited by the indigenous nasa, who have faced the historical stigmatization of that plant.

Breaking with prejudices, largely generated by cocaine, has not been easy, neither for the Nasa nor for other Inca and Amazonian peoples of South America. In fact, it is a struggle that began in colonial times and continues to this day.

But it is an indigenous company that has wanted to lead that battle to an unusual terrain: the commercial one.

“It is impossible at this point to continue to ignore her. So what we have done is touch that cultural, sanguine sensitivity, because we we carry the coca leaf in our blood“Says Fabiola Piñacué, the founder of Coca Nasa, the first community company to offer coca leaf-based products at a wholesale level in Colombia.

“As they have always said that coca is cocaine, then we have begun to spread that ‘coca is not cocaine,'” the also member of the Nasa people told BBC Mundo.

The coca leaf has multiple traditional uses in the cultures of the Andes, other than cocaine. The plant has analgesic properties and chew its leaves gives energy and suppresses hunger, thirst and pain.

But Coca Nasa now also faces a new legal challenge from Coke, the multinational that, through its legal representatives in Colombia, has required that the word “coca”On the products they sell.

“They have asked us to stop using the trademarks related to the coca leaf that bear the name ‘coca’. This request is very difficult to meet, because the coca leaf is the heritage of the indigenous peoples, ”says David Curtidor, the company’s legal representative.

“It is a dispute not only spiritually, but also financially. First it was with the Spanish empire that banned it, and now with the Coca Cola empire, ”he says.

How dideron Coca Pola and the other drinks?

The idea of ​​coca leaf-based beverages came about when Piñacué was at university in Bogotá in the late 1990s.

“I found it interesting to make a soda from the coca leaf,” he says.

His initiative germinated a few years later, when in 2005 he was first born Coca Sek, an energy drink: “It was very important to make a more exquisite drink in front of the eyes and palate of non-indigenous people.”

Then came the Wallinde brandy, Free Coca (a mix of Sek and Wallinde), the liquor Coca Rum and finally the beer Coca Pola.

“We like to drink beer [a los nasa] And so we saw the potential of the drink, that we should start making a type of beer. We did the rehearsals and we have been working on that until we succeeded and that is where Coca Pola comes out, ”explains Piñacué.

“We have been working for 25 years on sophistication of presentation, taste and quality. Also the display of our products, because they are very beautiful, because they are striking, because we started to play with all the culture and colors ”, he adds.

Coca Pola beer is not yet sold massively, like its other products, as it is still a “100% artisanal” product. CokeNasa has 15 workers.

But even the controversy with Coca Cola has given it a new impetus in Colombia, says its creator.

“Apparently that has bothered the owners of Coca Cola, because they say that we are kidnapping, but we consider that we are not kidnapping anyone, because the coca leaf, we the peoples, have inherited it,” he says.

“We had not launched as such, but Coca Cola does it by indicating that we do not use the name.”

The battle with Coca Cola

Coca Cola and Coca Pola have only the common name.

The famous soft drink is named after the coca leaf extracts that its creator, Atlanta chemist John Pemberton, initially mixed with sugar syrup.

At that time – at the end of the 19th century – coca leaf extract mixed with wine was a common tonic, and the sweet Pemberton concoction allowed him to ignore local laws prohibiting the sale of alcohol.

In a letter, published by Piñacué on Twitter, they ask that the indigenous company “permanently cease and desist from using the name Coca Pola or any similar term that may be confused with trademarks”Owned by the beverage giant.

Its use “could violate the trademark law in Colombia” and “the law of unfair competition,” warned the law firm Brigard Castro in the document dated November 26.

He gave a period of 10 business days to respond.

BBC Mundo requested an interview with Brigard Castro, but there was no immediate confirmation.

Curtidor explains that it is Coca Cola’s second lawsuit against Coca Nasa, since Already in 2007, after the launch of Coca Sek, they received a demand which was ultimately dismissed by the authorities.

“Yesterday [14 de diciembre] the deadline was met. They threaten us with legal action and we are waiting for them to initiate a trial, because we will not accept your threatening request“, He tells BBC Mundo.

“Several groups of lawyers, universities, etc., have offered us their legal support to defend us in case they sue us.”

In Coca Nasa they trust that they cannot be forced to remove the name “Coca” from their products because a resolution of the Colombian Constitutional Court granted protection for the use of the term to indigenous peoples.

“The indigenous must also be worth their political and economic proposals. So, from that perspective, it seems very important to us that we are the owners of the knowledge, from sowing until it is transformed and put into a product, ”says Piñacué.